I took some more photos on my walk to work during the third and final day of the strike. The next few days were full of holiday events; between those and work I haven't had time to post them until now.

As I've mentioned in my earlier posts, the strike made me walk through some places where I hadn't walked in some time. This made me renew some old architectural acquaintences, as well as introducing me to some new ones. 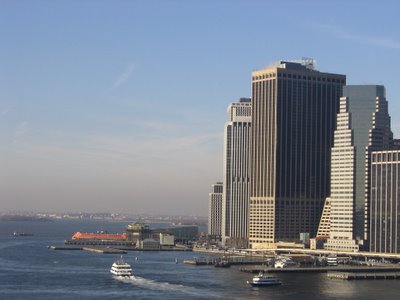 Crossing the Brooklyn Bridge, I noticed the frenetic activity on the water below. The ferry services were doing very good business.

I also noticed how banal the East River waterfront has become, palisaded as it is by undistinguished buildings of 1960s, '70s and '80s vintage, dominated by the monstrous, bulky 55 Water Street.

Continuing across the Bridge, I got another good view of "Civic Fame," this time of her back. This daylight view of the Municipal Building also explains the "Stalinist Gothic" quip in my earlier post.

The building to the right, topped by a golden pyramid, is the old Federal Court House, facing on 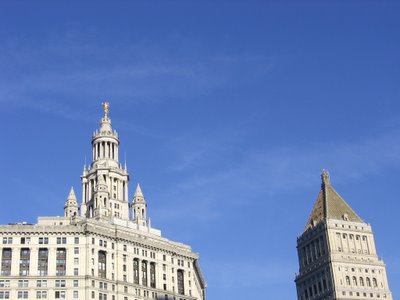 Foley Square. It houses the Court of Appeals for the Second Circuit and the District Court for the Southern District of New York. The latter has become so busy that additional courtrooms and judges' chambers have been added in the adjacent (but not visible here) new Daniel P. Moynihan Courthouse.

Vernacular architecture in New York runs the gamut. Here's the pagoda at Canal and Centre, in the heart of Chinatown: 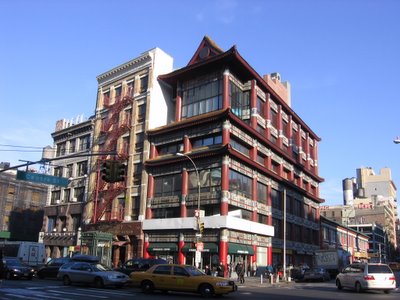 The ground floor used to house a bank, but now hosts a Starbucks. Can anything be divined from this change?

Small, often overlooked buildings can be surprisingly lovely. Consider these neighbors on Lafayette Street, one Romanesque, the other Gothic: 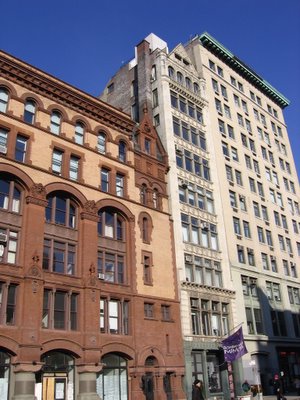 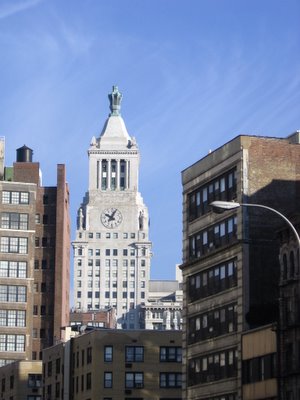 Reaching the north end of Lafayette at Astor Square, I looked at the clock on the Electric Kremlin (Con Ed headquarters, so called both for its appearance and for the alleged management style of the mighty utility company). Once again, I saw that I was later than I'd hoped.

Continuing my walk up Park Avenue, I noticed som 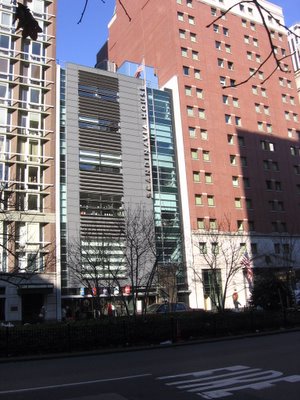 It proved to be "Scandinavia House." As you would expect of a building bearing that name, it is (1) modern, and (2) exquisitely tasteful. Its tatefulness may be accentuated by comparison to its less than comely neighbor to the right.

The art deco style is like the little girl with the little curl in the middle of her forehead. When it is good, it is very good: 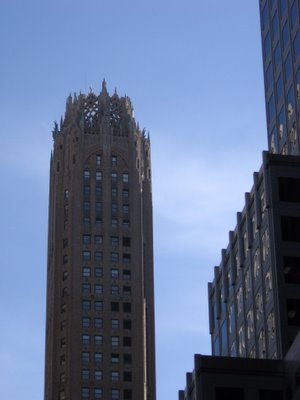 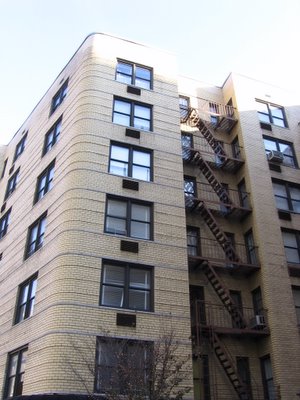 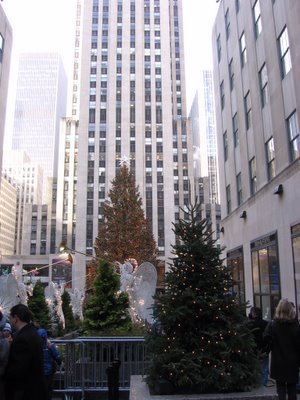 Happy New Year to all!

About two minutes into the fourth quarter, I was convinced they were going to show their talent for snatching defeat from the jaws of victory. An offsides call on an onside kick probably saved them going to overtime. Somewhere, Hipparchia is celebrating, as is my neighbor who spread a "Florida Gators" mat in front of his door a day before the game. He just recently passed the New York bar exam, and he and his longtime girlfriend have announced their engagement. DAH! Da-da-da-da-duh!

My USF Bulls were not completely humiliated in their first bowl appearance, even though they were shut out for the first time ever. At least they showed they have a decent defense, except for the second quarter, when they allowed N.C. State two quick TDs.
Posted by Claude Scales at 9:07 PM No comments: