The delights of the Fenimore Art Museum: Part 2: decorative arts, Hirschfeld caricatures, and Americans in Venice 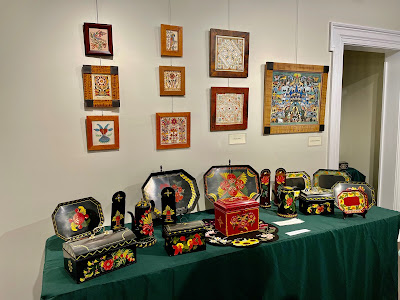 Across the hall from the Florida Highwaymen exhibit was a sign indicating that the gallery there featured "Fanfare for America: 19th Century Decorative Arts." The objects on display (photo) were not actual 19th century pieces; they were made by members of the Historical Society of Early American Decoration (HSEAD) which seeks to "record and preserve examples of Early American decoration" and to "promote . . . the elevation of the standards of its reproduction and utilization . . . and to cooperate with other societies in the accomplishment of purposes of mutual concern." These items were exquisite in their execution and beauty. 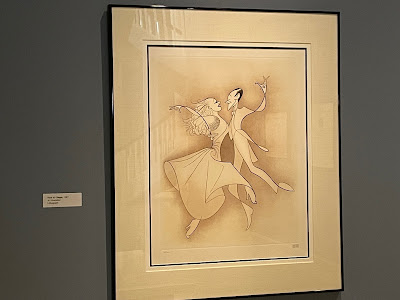 Our next stop was at the gallery featuring works of Al Hirschfeld, Caricaturist to the Stars. Above is his drawing of Fred Astaire and Ginger Rogers. As former Texas governor Ann Richards said, "Ginger Rogers did everything that Fred Astaire did. She just did it backward and in high heels."

According to the late playwright Terrence McNally, with whom I enjoyed a brew or two at the Lion's Head,"No one 'writes' more accurately of the performing arts than Al Hirschfeld. He accomplishes on a blank page with his pen and ink in a few strokes what many of us need a lifetime of words to say." 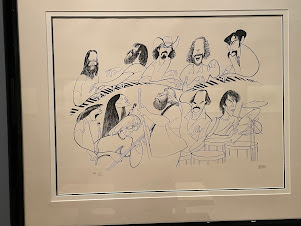 Hirschfeld also drew some stars of the 1960s music scene. How many do you recognize? 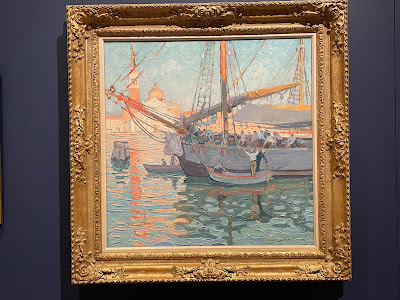 Our last gallery visit was to an exhibit of works by American artists done while or after visiting Venice. I'm a lover of things maritime, so my eye was caught by Jane Peterson's "The Lagoon, Venice" (ca. 1920). I thought her composition and use of light were superb. Ms. Peterson was born in Illinois but studied art at Brooklyn's Pratt Institute. 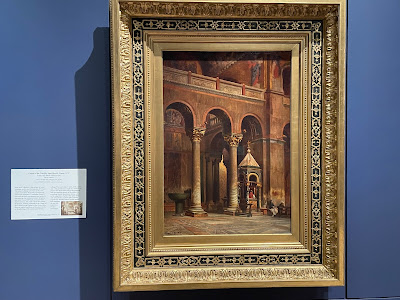 I next turned to "Chapel of the Crucifix, St. Mark's, Venice" (1871) by Frank Hill Smith, a Boston native who was both a painter and an interior decorator. This may explain his choice, and sensitive execution, of an interior scene. Note the small figures of the priest and two seated parishioners at the painting's lower right.
We look forward to next summer and our annual visit to the Glimmerglass Festival, which will always be accompanied by a visit to the Fenimore Art Museum.
Posted by Claude Scales at 11:47 PM No comments: