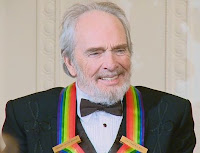 As the Times obit  tells it, he was a California native who spent his first few years living in an abandoned boxcar his father had fixed up during the depression years as a family home. His teens and early adulthood were marked by scrapes with the law, culminating in 1957 in his his being sent to San Quentin Prison for burglary.


He was paroled in 1960, and went on to become one of country music's most influential stars. Early on, he worked with Wynn Stewart, a Missouri native who moved to California and was the first exponent of what came to be called the "Bakersfield Sound", named for a city near the southern end of the San Joaquin Valley, north of Los Angeles. Country music from Bakersfield was more hard-edged than that coming from Nashville at the time, when Nashville was trying to broaden its appeal with what guitar wizard and producer Chet Atkins called "countrypolitan". Bakersfield music provided the roots for what in the late 1970s was called "outlaw" country, exemplified by Waylon Jennings and Willie Nelson, along with Merle.

According to the Times obit, Merle included among his influences Lefty Frizzell, who gave Merle's career a boost by inviting him onstage after hearing him sing along from the audience; Elvis Presley; Jimmie "The Yodeling Brakeman" Rodgers, considered one of the founders of modern country music; Chuck Berry; and the King of Texas Swing, Bob Wills.

He influenced many, including Waylon and Willie, and my great favorite, Gram Parsons. The song in the clip above, "Sing Me Back Home", one that Merle wrote based on a prison experience, I first heard sung by Gram with the Flying Burrito Brothers.

Goodbye, Merle. I like thinking that you, Waylon, and Ol' Possum George Jones are singing great harmony now.

Photo at the top of this post is public domain: Merle Haggard dressed for Kennedy Center Honors at the White House, December 2010.
Posted by Claude Scales at 12:02 AM No comments:

An inauspicious opener for the Mets.

Trying to forecast a team's season from early results is chancy at best. It's widely agreed that spring training game records are meaningless. That's a good thing for this year's Mets, as theirs was miserable, although they ended with an 8-1 victory over the Cubs, who are the favorites of some pundits to win this year's World Series. If the Cubs do go all the way, it will be for the first time since the administration of William Howard Taft.

This year I didn't follow spring training very closely; I had a day job that was keeping me busy, along with the Brooklyn Heights Blog. It's just as well; I missed some embarrassing moments. This seemed to bear out what the New York Times' Tyler Kepner wrote back at the beginning of spring training, in his analysis of what could go wrong for each team. I quoted in an earlier post what he wrote about the Mets, but will repeat it here:


The starters try hard to keep the ball out of play -- to minimize the impact of the team's shaky defense -- but their 2015 workload wears them down. David Wright's spinal stenosis limits him again, and while Yoenis Cespedes struggles in center field, he hits well enough to exercise his opt-out clause and repeat his protracted free-agent dance.

In yesterday's opening game, the Mets were fated to face the Kansas City Royals, the team that had beaten them in last year's World Series, at Royals Stadium. Hopes for revenge were high. Matt Harvey, the ace of what is regarded as the most fearsome starting rotation in the Majors, was to take the mound despite an earlier medical scare. All else seemed well.

Kepner's prediction seemed to be mostly accurate as to what happened in the opener. Perhaps it was Harvey's efforts to keep the ball out of play that contributed to his miserable start; he gave up eight hits and was tagged for three runs--a fourth was unearned because of a fielding error by, you guessed it, Cespedes--over five and two thirds innings.  Wright's throws--especially one on a grounder to third with a runner headed for home and another on a bunt--seemed less than perfect. Cespedes managed one hit and drew one walk; he scored once but did not have an RBI. Most importantly, he ended the game by swinging at an outside fastball after having dueled the Royals closer, Davis, through seven pitches. He stranded runners at third and first, with the Mets down by one.

On the bright side, the Mets bullpen was perfect, allowing no runs, one hit, and no walks over three and a third innings. Conversely, Mets batters were able to mount a rally against the Royals' pen, scoring three runs on three hits and two walks.

While this game may not have been an omen for the whole season, a loss in April counts as much as one in September.  As usual in season opening series, the teams had today off and will meet again tomorrow evening. The Mets will have Syndegaard on the mound. We can hope.

Update: the Mets are now a .500 team, thanks to a fine outing by Syndegaard, who had to work out of a couple of jams but allowed no runs, to a two run blast in the fourth by Neil Walker, and to another perfect showing by the bullpen. Oh, yes, and no errors. Downside: no scoring, apart from Walker's homer. In the seventh and eighth the Mets managed to mount scoring threats, only to leave runners stranded.

Posted by Claude Scales at 12:09 AM No comments: