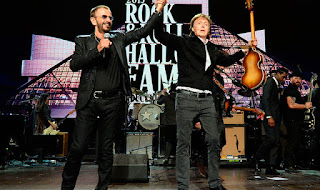 Paul McCartney posted this photo of himself and Ringo taken at AIR Studios on the Caribbean island of Montserrat, probably in 1981 during the recording of Ringo's album Tug of War. Ringo turns 76 today.

The Mariners, handsomest of cargo ships. 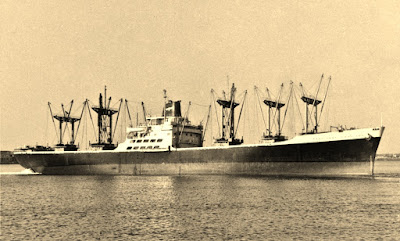 In July of 1954, my father, mother, and I boarded the USNS Geiger at Southampton for our return voyage to the U.S. following Dad's three year tour of duty in England. Geiger was one of three--her sisters were Barrett and Upshur--passenger and cargo liners that had been under construction during the early 1950s for American President Lines but, because of the Korean War, had been taken for military service (they were heavily subsidized by the government, which allowed this option). As we boarded Geiger I saw a sleek new cargo ship docked astern of us, also in Military Sea Transport Service livery, with the name Cracker State Mariner. We departed Southampton that afternoon, with Cracker State Mariner still at dock. After a smooth summer crossing, we arrived several days later at the MSTS terminal on Staten Island. As we pulled into our dock, I could see, already docked at the next pier, Cracker State Mariner, which had outpaced Geiger, a new ship herself, across the Atlantic.

The photo above shows Cracker State Mariner after she left government service in 1956 and became part of the American President Lines fleet, renamed President Coolidge, She remained with APL until 1974, when she became Export Defender of American Export Lines. Four years later she reverted to government ownership and to her original name. As breakbulk freighters were quickly going out of style at that time, I suspect she went out of service and was laid up in the government's reserve fleet. In 1992, having survived a respectable 38 years, she went for scrap in India.

Sometime in the mid 1970s I was taking a mid-day stroll around Battery Park, at the southern tip of Manhattan, and saw the Thomas Jefferson, of the Waterman Steamship Corporation, heading outward through the channel between Manhattan and Governors Island. I didn't know it, but this was to be my last view of a Mariner class ship. She was originally Golden Mariner, completed, like Cracker State Mariner, in 1954, but on the opposite coast. Golden Mariner named for California, the Golden State, was built at Bethlehem's San Francisco yard; Cracker State Mariner at Newport News Shipbuilding in Virginia. In 1955 Golden Mariner became part of the Pacific Far East Line fleet, and in 1961 she was renamed California Bear. She was acquired by Waterman and became Thomas Jefferson in 1973, not long before I saw her. She was broken up at Kaohsiung, Republic of China, in 1980.

No doubt I'll get some disagreement with my calling the Mariners the handsomest of cargo ships. There are many rivals, American and foreign. My nominee for runner up in that category is the Victories, the war emergency class that preceded the Mariners and succeeded the "ugly duckling" but much loved Liberties. I've written before about American Victory, one of three surviving members of that class, that is now a floating, and sometimes mobile, museum in my old home city, Tampa.