Scenes from a morning walk through DUMBO.

Coast Guard cutter heading down the East River to take a position near Governor's Island. This happens whenever the President is due in town. 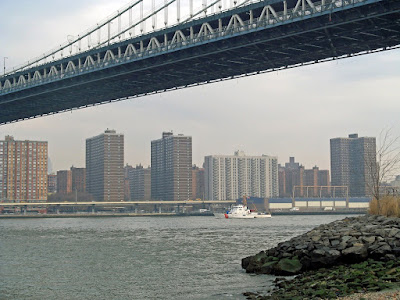 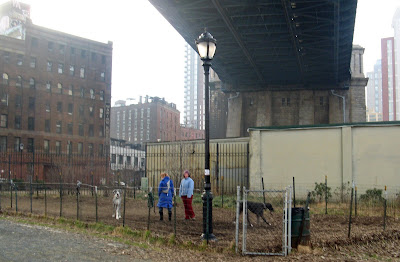 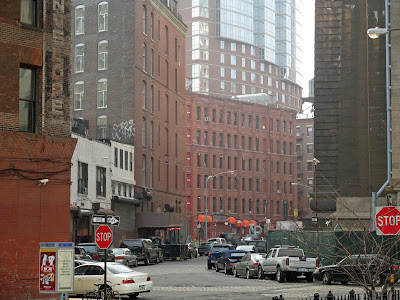 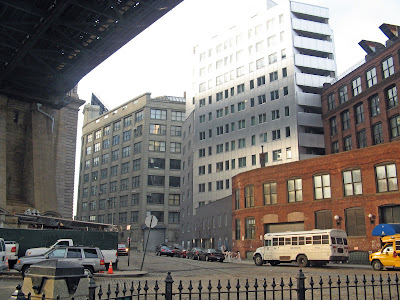 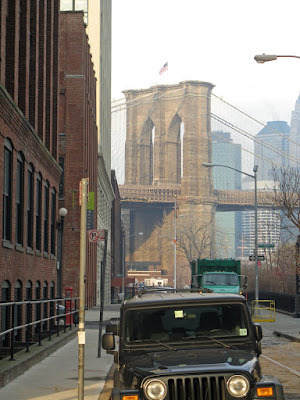 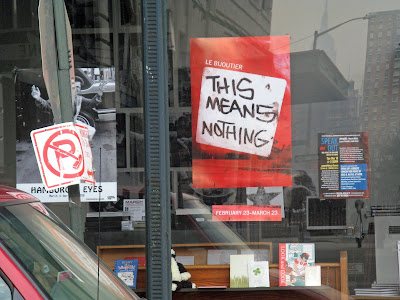 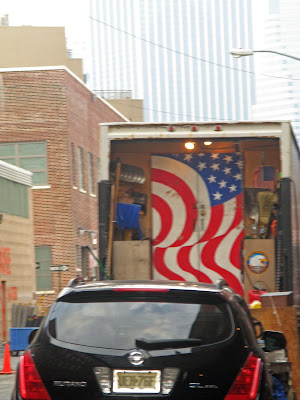 Update: Thanks to Anonymous for correcting my geography. What I thought was Jay Street is actually Pearl (I checked a more detailed map to confirm), and it, along with Jay and Adams, actually runs north-south rather than east-west (my mistake here was in thinking that anything perpendicular to the East River must run east-west, but DUMBO lies next to a stretch of the East River that runs east-west instead of north-south). I've amended my text accordingly.
Posted by Claude Scales at 11:28 PM 3 comments:

Email ThisBlogThis!Share to TwitterShare to FacebookShare to Pinterest
Labels: Brooklyn

Oddest Google search to lead to a hit on my blog.

Sorry to disappoint.
Posted by Claude Scales at 3:19 PM 1 comment:

Louise Crawford put the wood to me, at the delightful Brooklyn Blogade hosted yesterday by Joyce Hanson, AKA Bad Girl (we're talking "bad" in the probably now hopelessly archaic hip-hop sense). Anyway, amid all the bonhomie, Louise let me know in no uncertain terms that the volume of my production of late has been a bit less than up to snuff. All I could do was hang my head and nod "Yes."

So, I should certainly find something blogworthy in our (I'm referring to my fellow Empire Staters here) Governor's admission that he's shelled out major coin for some choice nooky. At first, I thought of trying to do something about how this provokes an intra-cerebral civil war between my classic liberal (what consenting men and women do in private, whether out of purely erotic or commercial motivation, is no one else's business, even if one of them happens to be a politician, televangelist or whatever) and Burkean conservative (prostitution is bad because it gives rise to conditions in which persons can be exploited without meaningful consent) sides. But that was going to demand a long essay, and I didn't have the energy or desire.

What I kept hearing was, "How could he be so stupid?" Stupid, I'll agree, but perhaps not in the sense of just failing to realize the risk. The phrase that kept repeating in my mind this afternoon was spoken by Maggie Smith playing the title role in The Prime of Miss Jean Brodie: "Beyond the ordinary moral code." In the movie (and novel by Muriel Spark from which it was derived), Brodie is a teacher in a fancy girls' school in Scotland during the period just before World War Two, and a vulgar Nietzschean with fascist sympathies. One of her students is so beautiful, intelligent and talented that Brodie is convinced she is a true uberfraulein. In order to nudge this girl towards her rightful (as Brodie sees it) destiny, she connives for her to have an affair with the art teacher, a man in his thirties, married with six children. This all ends, inevitably, in disaster for both the art teacher and the girl. Brodie's excuse, of course, is that the girl was "beyond the ordinary moral code."

There are people who believe this about themselves. Some turn to overt crime: murder, rape, theft. We call them sociopaths. Others hew to more conventional career paths, and are often quite successful. Because this belief is strongly correlated with narcissism, some of them go into show business (of which televangelism is a part) or politics. Spitzer may exemplify the latter.

Alternatively, if we take seriously Spitzer's statement that his actions violate his, and anyone's, sense of right and wrong, we could conclude that there was, in his psyche, some desire for self-destruction.

How to answer the question in my caption for this post? That's a matter of practical politics, not philosophy. I suspect that the pressure from the Democratic Party in a presidential election year will prove irresistible: Spitzer will be out, and soon.

Update: There's an AP story that quotes several psychologists on the question, "Why do smart people do dumb things?" As you might expect, opinions vary, with some of the experts supporting a theory of hubris that is close to what I expressed above.

On the question whether Spitzer should resign, the lead Times editorial harrumphs mightily about it not being, as Spitzer asserted, primarily a "family" matter, but just calls for a more complete and public act of contrition, and does not demand his resignation. Comments on Instaputz (click on the word "Comments" to see them in Haloscan), including some by Brooklyn Heights Blog regulars, are generally taking the perfect-act-of-contrition no-resignation tack.

Second update: Newsweek's Howard Fineman has another theory about what motivated Spitzer. He thinks it may have been an inner conflict over his career as a politician. This brings to my mind a New Yorker cartoon by William Hamilton that depicted a sixtyish, besuited man sitting with several similar gents, all with drinks, in a club lounge, and saying, "Steel, of course, has been my life. But sometimes I wish my life had been a sunny cafe in Provence, with a pretty girl and a bottle of beaujolais."
Posted by Claude Scales at 11:21 PM No comments: