What We Did on Our Holidays - Part 1 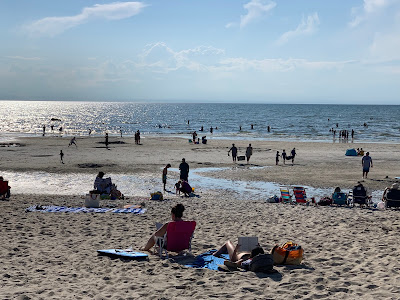 I've been on a Fairport Convention kick lately, so I decided to purloin the title of their second album for two pieces on what Martha and I did on our two short holidays ("vacations" in American) this summer.

For our first, we once again enjoyed the hospitality of our friends John and Susan Proctor in their spacious house in the town of Orleans, just past the "elbow" of the Cape Cod peninsula. Their house is a comfortable walk from Skaket Beach (photo above), which is on the bay side of the peninsula. 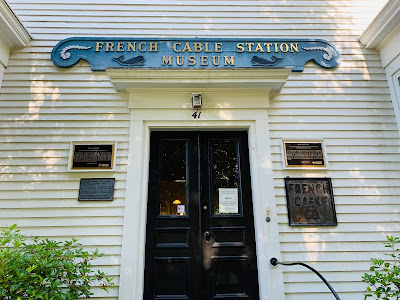 On our first day, at John's and Susan's suggestion, we visited the French Cable Station Museum. The history behind it is that in 1879, tired of having to route all their transatlantic cable traffic through London, the French laid their own cable from near Brest, on the Brittany peninsula, to St. Pierre, a small island to the south of Newfoundland that is part of Metropolitan France, and extended it from there to Cape Cod. It landed in the town of North Eastham, but because the location there was remote and difficult to access in winter, in 1891 the cable was extended on land to Orleans, just to the south, and the Cable Station (photo above) was built there. No doubt the French were pleased to have it terminate in a place with a French name.

In 1898, a new cable was laid directly from Brest to Orleans. During World War I General Pershing, commander of American forces in France, used it to communicate with the Army Department in Washington, and in 1927 it brought news of Charles Lindbergh's safe arrival in Paris. During the German occupation of France in World War II, U.S. authorities closed the station for security reasons. It was re-opened in 1952 and remained in operation until 1959. 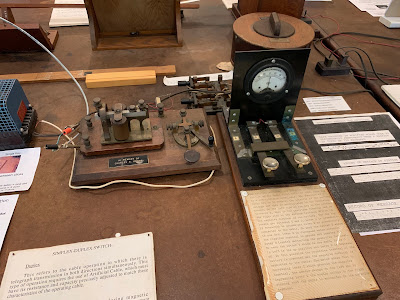 Because of the constrained size of the cable, it was not capable of transmitting keyed Morse Code dashes and dots it the same way telegraph lines could. Instead, it transmitted variances in voltage, with low voltage representing a dot and high a dash. The equipment an operator would use to translate the voltage variations into conventional Morse Code for forwarding inland is shown above.

As we were leaving the Museum, I noticed that next door was the Addison Art Gallery. I suggested that we go in for a look, and the others readily agreed. I'm glad I did. The Gallery was presenting After Hopper, a series of events commemorating Edward Hopper, who spent many summers and did many paintings on the Cape. As the Gallery's website puts it: " 'After Hopper' celebrates the artists of today who continue to pursue Hopper's path in their own unique ways." Some, like John Murphy are faithful to Hopper's fairly strict representational style. Some, like Marc Kundmann's "Stella in the Morning",  pay homage to Hopper's works; in this case Hopper's "Morning Sun." Others, like Catherine Hess, have a more impressionistic style. 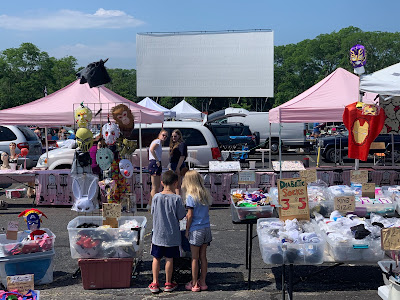 On summer saturdays there's a flea market at Wellfleet's still active drive-in cinema. I bought a copy of George Johnson's Fire in the Mind: Science, Faith, and the Search for Order, which I may read someday, and John Patrick Diggins's The Promise of Pragmatism: Modernism and the Crisis of Knowledge and Authority, which I will read, because it bears upon things on my mind now. 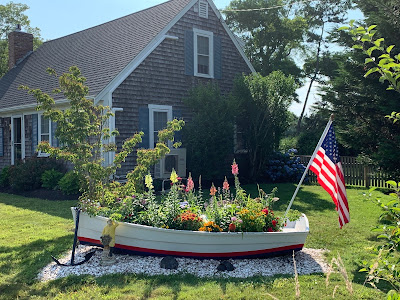 Coming back from one of my daily walks to Skaket Beach, I passed this typical Cape Cod house with an atypical floral display. 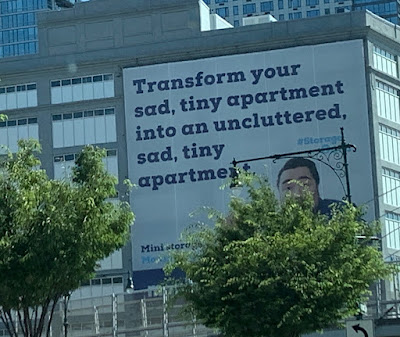 On our arrival back in New York City, we were greeted by this sign.
Posted by Claude Scales at 10:23 PM No comments: