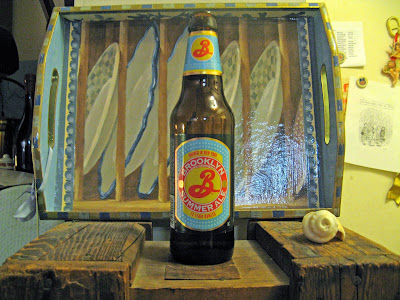 Having previously sampled the Sam Adams and Saranac lines of beer and ale, I've finally gotten around to what I should have written about first: the products of a brewery located not far from where I live, the Brooklyn Brewery. A few months ago, I bought a bottle each of the six Brooklyn brews available at my local market and, over the course of a couple of days, tasted them and made notes. Then I misplaced the notes. Last week, I noticed that Brooklyn Summer Ale (see photo above), which wasn't available when I did my earlier tasting, was back on the shelf. So, I bought a bottle and had it with lunch. This inspired me to do a thorough search, in which I uncovered my notes from the winter. Since I've had the Summer Ale most recently, and summer is approaching, I'll start with it.

Brooklyn Summer Ale: Rich golden color; nose yeasty but with fruit overtones. My first reaction on tasting was that this ale lacks any outstanding qualities; it's pleasant without there being anything memorable about it. The finish has a slightly fat, glycerin-y quality. However, as I tucked into my falafel sandwich from Damascus Bread & Pastry Shop--I get mine with the works: lettuce, tomato, pickle, red cabbage, tahini and hot red sauce--I noticed the ale reacting nicely with the spiciness of the sandwich to produce a sublime tart apple-like flavor. The Brewery's website recommends pairing it with "lightly spicy dishes". That seems good advice but, heck, I'd like to try it with a vindaloo curry.

Brooklyn Lager: The brewery's flagship. Deep orange color, aroma like freshly-made toast, with a hint of banana. Good malt-hop balance, with a suggestion of carrot in the finish. This is a robust beer that goes well with heartier foods like grilled meats, roasted or fried chicken or fried fish. The website describes this as "in the 'Vienna' style"; this description was also applied to Saranac's "Season's Best" issued in 2008, which I liked very much.

Brooklyn Pilsner: Deep golden color shading to amber; herbaceous, hoppy nose. Hop bitterness is predominant, but not too assertive, leading to a pleasant, citrus-y finish. The Pilsner style, a kind of lagered beer that originated in what is now the Czech Republic, is the style of most mass-marketed, and many local stalwart, beers in the U.S. It's versatile: Pilsners go well with most kinds of food, including spicy Asian and Latin American cuisines, and it takes well to chilling, so can be enjoyed alone as a thirst quencher on a hot afternoon.

Brooklyn Pennant Ale '55: Deep amber color; yeasty aroma. On the tongue, it gives a suggestion of apricots, then finishes with a pleasing nutty taste. This is a sentimental favorite of mine. I fell in love with baseball, and with the 1955 Brooklyn Dodgers, when I was nine years old and living in Florida. The brew was named in honor of the Brooklyn team's only World Series victory--they lost to the hated Yankees in '56 and moved to L.A. in '57. As I recall, the Brewery was pressured to remove "'55" from the label by the Dodgers organization, which is notoriously zealous in attacking anything it can arguably construe as a trademark infringement. Apparently, the Brewery prevailed. In my view, the Dodgers should be held to have forfeited any claim to anything involving Brooklyn, or the team's history here, when they went west.

Brooklyn Brown Ale: Reddish brown color; yeasty nose with floral overtones. Sweet start; tart finish, with a coffee-like astringency. This is a very well crafted ale. The website suggests pairing it with beef or cheese. It's good as a stand-alone drink, too.

Brooklyn East India Pale Ale: Amber color; aroma of herbes de Provence with citrus undertones. In the mouth, forward hop bitterness is nicely balanced by malt warmth, leading to a finish like brioche or a croissant. I've long been a big fan of IPAs, loving their intensity of flavor. This one is a fine example of the genre.

Missing from this lineup is the Brooklyner Weisse, which I haven't seen since last year. I'll add a review as soon as I can find some.

All of the above bottled beers and ales are brewed under contract (and, according to the Brewery's website, under the supervision of the Brewery's brewmaster) by F.X. Matt in Utica, New York. Matt also makes the Saranac line of brews. However, according to the Brooklyn Brewery website, there are four bottled brews, none of which I've ever seen, that are made at the Brewery in Williamsburg, Brooklyn. These are: "Brooklyn Local 1, Brooklyn Local 2, Brooklyner-Schneider Hopfen-Weisse, and Black Ops." I'll be grateful to anyone who can tell me where to get these. Some of the Brewery's cask brews are made in Williamsburg, too.

A few years ago, while attending a conference on Brooklyn's economic future, I had the pleasure of meeting Brooklyn Brewery's President and co-founder, Steve Hindy. I asked if he could say there would never be a "Brooklyn Light"; he assured me this was not in their plans. I later learned that his wife was the principal of my daughter's middle school.

There are other craft breweries in Brooklyn today, including Kelso and Sixpoint, both of whose brews I have enjoyed on tap at local taverns. I'll be writing more about them later.
Posted by Claude Scales at 11:35 PM 7 comments:


I first heard Amy Speace on a friend's CD about a year ago, and tagged her as a singer to watch. At the time, I couldn't find any videos on-line of her in performance. On Friday, Eliot Wagner posted on OTBKB a link to the video above of Amy doing the ballad "It's Too Late to Call It a Night", as earlier posted on Now I've Heard Everything.

Among the musicians backing Amy on this song are David Buskin and Robert Batteau. Some years ago, I caught them in performance at the late, lamented Bottom Line, and this was part of their set:


As I recall, Buskin & Batteau were on the same bill with Christine Lavin, who is seen here doing a song appropriate for Mother's Day:


Thanks to piddlepuddle for this clip of Christine performing at the Unitarian Center in Ashland, Oregon.


Thanks to bprism for this clip, made at the Falcon Ridge Folk Festival in 2008.
Posted by Claude Scales at 3:41 PM No comments: