As I noted before, last weekend I went to Philadelphia for a meeting of Fray particpants from across the country. After arriving at 30th Street Station around 11:45 A.M., I took a cab to my hotel at Arch and 4th Streets, in the historic district. Once I had unpacked, I was ready for lunch. Not any lunch. I wanted the real Philly cheesesteak sandwich. Fray friend Topazz had recommended Pat's for the quintessential version. I consulted a tourist guide and map, and determined that Pat's was a good 45 minute walk away. Being as keen to see the city as I was to fill my belly, I decided to take the walk.

I walked westward across 4th to Market, then turned right to head towards 9th. After a couple of blocks, I paused to get my obligatory shot of Independence Hall. 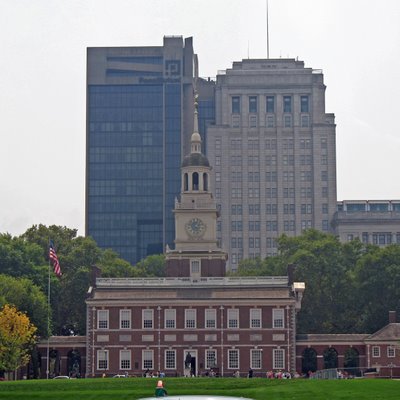 Continuing across Market, I came to a magnificent example of late 19th century cast iron department store architecture. There are many buildings in this style in the "Ladies' Mile" section of New York, but I reckoned this an especially fine specimen. It is the former Lit Bros. store, now subdivided into a few street level chain shops and offices above.

Fortunately, the building has been preserved.

To the right of the "Lit's" sign facing the intersection is a sign that reads, "Hats trimmed free of charge." I wonder if Carmen Miranda ever came to Philly to take advantage of that offer. 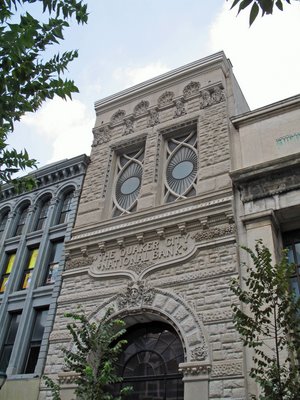 I'm not sure why, but smaller cities like Philadelphia seem to have much more exuberant vernacular architecture than New York. Perhaps it's because architects working in cities with less critical oversight felt less inhibited.

In any event, note the "eyes" on The Quaker City National Bank Building. Revel in the playful texture of the facade, and the "thought balloon" containing the institutional name, suspended above the helmet of the figure on the keystone of the arch.

I turned left off Market onto 9th and walked southward. After a few blocks, I started to get into the heart of old Italian South Philly. Several blocks were taken over by outdoor market stalls selling produce of all descriptions. 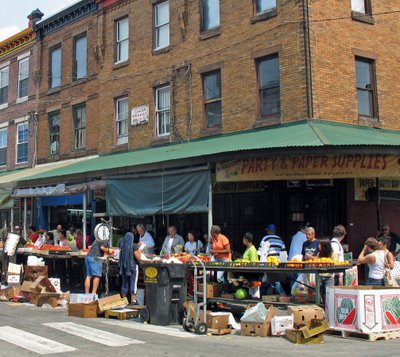 Finally, I arrived at my destination, and found the end of a long, but fairly rapidly moving line. 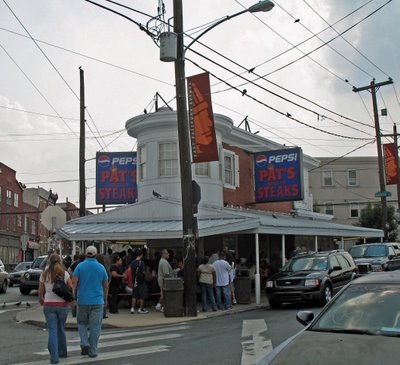 The questions of the moment were Cheez-Whiz or Provolone, and "with" (or, as Topazz had coached me, "wit") or "without". (The last refers to onions.) I had read that cheesesteak cognoscienti prefer "Whiz"; the issue of onions is left to individual taste. When I got to the window, and a little, brush-cut pitbull of a man barked "Next!", I said, "One Whiz wit, please." (The last word probably gave me away as a tourist.)

The sandwich proved worth the walk and the seven bucks. The meat was sliced thin and a bit overdone for my taste. The logic of "Whiz" was readily apparent; its semiliquid state allows it to permeate every crevice, and its unsubtle flavor perked up the beef nicely. The bread was an ideal companion for these ingredients; soft and spongy, but still firm enough to keep its shape and hold the filling, while absorbing the cheese and the meat juice. The onions were a bit of a letdown -- heavily sauteed and droopy, like those you get from hot dog carts. Next time, I may try a "Whiz witout". Nevertheless, I was more than satisfied.

As I started back to my hotel, I noticed Passyunk Avenue heading off at a northeastward angle, forming a hypoteneuse to the triangle whose legs of Market and 9th I had walked to get here. At the apex of the triangle sat Pat's gaudy competitor, Geno's. 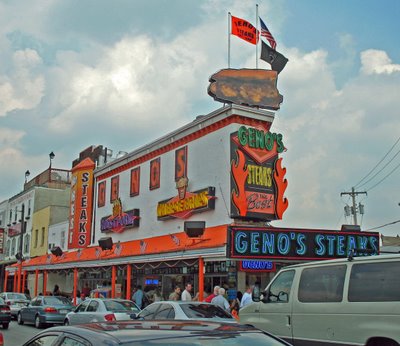 I decided to take the Passyunk shortcut, which would afford me the opportunity to see some different things on the way back. After walking a few blocks, I became very thirsty. I was sure I'd soon come to a little deli where I could get a bottle of water, but all I could find were residences and auto supply stores. 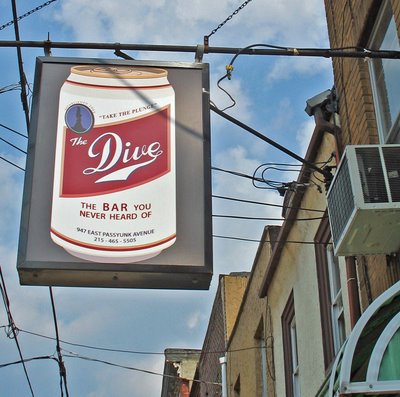 Fortunately, after another couple of blocks, I found this angel of mercy, attended by two cherubs (one of whom is visible just inside the door) at the corner of Passyunk and Catherine. 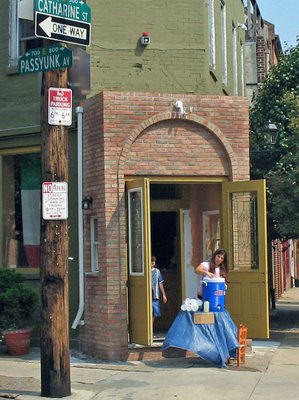 The lemonade they vended was a perfect chaser to a Pat's cheesesteak, having a crisp tartness that banished the lingering salinity of the Cheez-Whiz and onions.

Passyunk Avenue came to an end a few blocks later, near this building, on which two more cherubs fluttered in attendance on an unlikely monarchy. 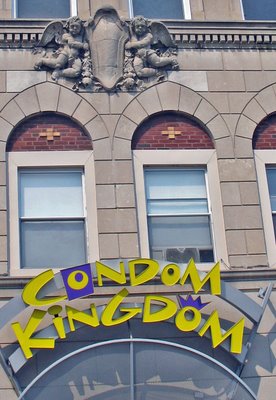 Just beyond that building, an unknown philosopher proclaimed dislike of any Categorical Imperative. 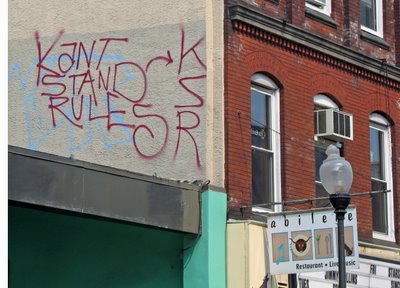 Back when she was governor, Ann Richards had the duty of speaking to a group of state insurance regulators who were meeting in Houston. Also in the audience were many representatives of the insurance industry and their lawyers, myself included in the last category. It was, I suppose, a fairly standard Ann Richards speech, laced with Texan expansiveness but leavened by self-deprecating humor. At one point, she suggested the need for greater government oversight of some aspect of the business. There was a moment of dead silence, then one man started clapping loudly. "You're a lo-o-o-nely fellow," she said.

Given the drift of Texas politics over the years since she left office, one might suppose she spent her later years as a lonely woman. But the progressive tradition in Texas is still very much alive. Ann Richards embodied much of what is great about a great state.

9/18 update: Interesting and amusing reminisences of Ann's post-gubernatorial days by a man who served as her personal assistant, in a blog called In the Pink Texas.
Posted by Claude Scales at 9:04 AM No comments:

I was going to post a few quick shots I got this morning on the way from my daughter's school at West Street and Murray to my office at 45 Broadway, But those on Gowanus Lounge are so compelling that the best I can do is direct you to them.
Posted by Claude Scales at 10:54 PM No comments: 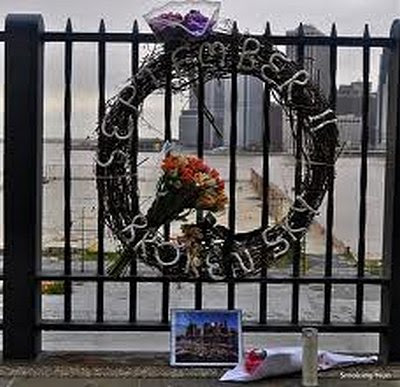 It’s five years since
the turbofan clatter, the sudden silence,
the loud report, the screams,
the gashed tower, the smoke,
then the flame, and the realization…

I like to imagine a time
when you, George and I
take the heavenly PATH
to celestial Hoboken, where,
at the bar of the cosmic Brass Rail,
we’ll sip ambrosial Berliner weisse.
This time, Brando will join us.
Posted by Claude Scales at 12:22 AM 1 comment:

Yesterday I rode the Amtrak Keystone from Penn Station to Philadelphia, to attend a gathering of Fray participants there (I'll be posting more about my visit to Philly later). When I got off the train at 30th Street Station, I did a double take as I walked past the locomotive and saw its number. 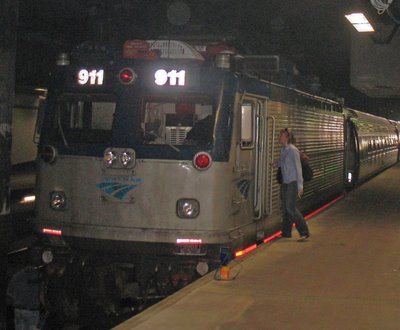