Your correspondent finds, to his great surprise, that he's a really cool guy. 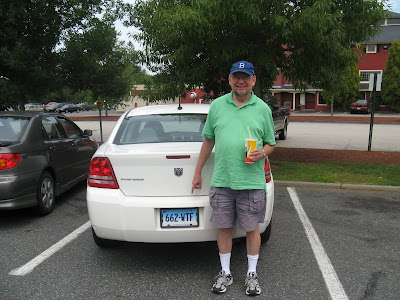 Today's New York Times fashion section includes an article by Guy Trebay that starts with this welcome (to me, at least, if not to Robin Lester, who tipped me off to it) news:

This summer the unvarying male uniform in the precincts of Brooklyn cool has been a pair of shorts cut at knickers length, a V-neck Hanes T-shirt, a pair of generic slip-on sneakers and a straw fedora. Add a leather cuff bracelet if the coolster is gay.

In truth this get-up was pretty much the unvarying male uniform last summer also, but this year an unexpected element has been added to the look, and that is a burgeoning potbelly one might term the Ralph Kramden. 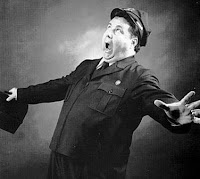 For anyone too young, or un-steeped in American pop culture, to remember The Honeymooners, here's a photo of Jackie Gleason as Ralph Kramden, intrepid Brooklyn bus driver, thrusting his ample belly forward. Compare this to the photo of myself at the top of this post. It's not a stretch to say that I have a "Kramden."

Of course, Trebay notes that the hipster's Kramden is "developed too young to come under the heading of a paunch"; nevertheless, I submit that mine has entirely been the product of a period in which I have been Young At Heart (for some odd reason, my wife persists in using the archaic locution "immature").

To top things off, I later got drawn into one of those virally multiplying Facebook quizzes, this one seeking to determine "[w]hich Last Exit [a bar I have actually visited twice] patron are you?" The answer I got was "The Hipster":

What's up with crazy yourself, hep-cat?! Nice shirt... oh, I get it. You're not REALLY a trucker named Randy. You got that at Beacon's closet. Well, congrats you Brooklyn dwelling recreant. You're the kind of customer that is nice, polite, easy on the eye and an excellent tipper. It's okay that the credit card you're using is under you dad's name- we know where that money is coming from. You like to drop by on Friday nights and come in sometimes on Monday for Pub Quiz with your workmates from Google. It's cool. Just don't get too drunk and vomit in the bathroom - that's when you cease to be pleasant. Until then, cheers!

Not too bad a description, I submit, except for the bits about dad's credit card and working for Google. I haven't been in for Pub Quiz yet, but it sounds like something I should check out.

I'll confess, I did have to be a bit creative in answering some of the quiz questions. For example, the multiple choices for "What do you order to drink?" didn't include "craft-brewed ale, e.g. Six Point Brownstone or Dogfish Head IPA", so I had to make do with the closest substitute: "PBR and a shot of Jack." Of course, a couple rounds of that would put my aging liver on the ropes, but never mind. Tomorrow, I shall wake with a new mantra: "I'm cool, I'm no fool, get used to it!"

Oh, yeah. Did I mention that I have an IMDb page?
Posted by Claude Scales at 8:01 PM 2 comments:


Several evenings ago, I had the pleasure of dining with Elaine Comparone at Bar Pitti, where she hosted a birthday dinner for an old friend of my wife's and mine. I knew Elaine by reputation as one of the greatest of contemporary harpsichordists, and had heard recordings of her work, including Bach with Pluck. I asked about videos of her performances, and she recommended the clip above, in which she plays, with the Queen's Chamber Band (consisting of Marsha Heller, English horn; Robert Zubrycki, violin; Lori Miller, violin; Veronica Salas, viola; Peter Seidenberg, cello; and Tomoya Aomori, bass), "Echoes from a Distant Land", by the Cuban-American composer José Bernardo.


Here's an Italian baroque piece, Scarlatti's Sonata in D minor, K. 517, performed by Elaine solo on her 2-manual harpsichord built in 1968 by William Dowd.
Posted by Claude Scales at 10:28 PM No comments: