One of the commenters on this YouTube clip notes that the chord progression comes from Bach. Another wonders who Bach stole it from.

Update: Now I think I know the answer. It struck me that "American Tune" is closely based on the Tom Glazer labor anthem "Because All Men Are Brothers". This website states that the tune for that song was Bach's O Haupt voll Blut und Wunden (also the basis for the English passion hymn "O Sacred Head Now Wounded") from the St. Matthew Passion. Bach, in turn, based this on H. L. Hassler's Mein Gmüth ist mir verwirret, in Venusgärtlein (Nuremberg, 1613). Now we can wonder where Hassler got it.
Posted by Claude Scales at 8:46 AM 3 comments:

A fountain, a ship, some boats.

This morning, the WQXR announcer predicted a high of ninety degrees. I rose quickly to go for my walk over the Brooklyn Bridge before it got too hot and muggy. I was out the door by eight, and made my way briskly up the Promenade and across the Bridge. On the Manhattan side, I made my customary little side trip to the City Hall Park Fountain, pausing to get this photo before heading back to the Bridge. 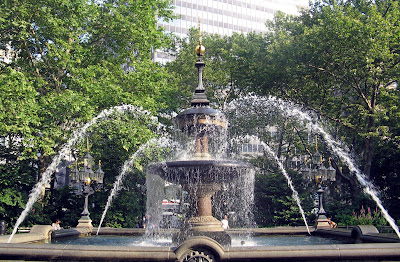 Back on the Bridge, as I approached the west (Manhattan side) tower, I noticed a container ship, assisted by two Moran tugs, leaving its berth at Red Hook (since the time of the linked post, the Port Authority has decided to renew the lease of the operating company for the Red Hook container port, thus extending its life at least for the term of the new lease). I got this shot from the vantage point of the west tower. 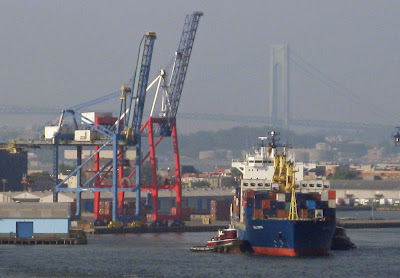 By the time I got to the middle of the Bridge, the ship was almost broadside to me. She proved to be ANL Esprit, of the former Australian National Lines, now part of the much larger French CGM Group. She is one of the cargo ships that include accommodations for passengers, like lovely Abbie and Natalie. Here she is as seen from mid-Bridge: 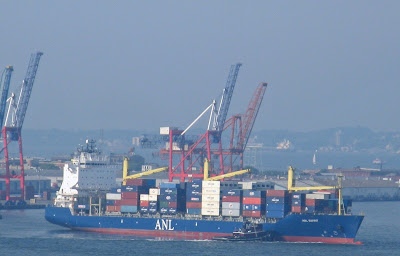 As I approached the east tower, I saw this bright red tug pulling two empty barges: 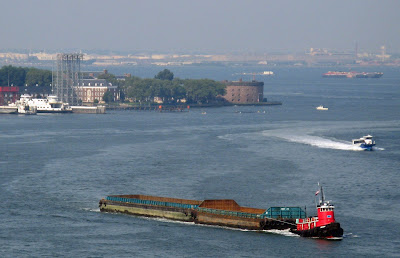 By the time I reached the east tower, ANL Esprit had almost completed her turn to head out the Buttermilk Channel toward the lower harbor: 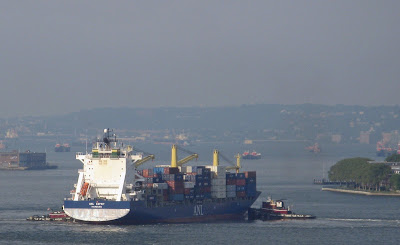 Off the Bridge, and onto the Promenade again, I saw two yachts, a large schooner and a small sloop, crossing in front of Ellis Island: 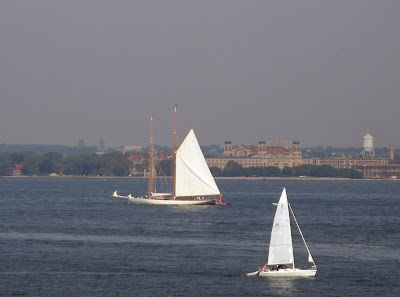 Proud to be a lawyer, redux. 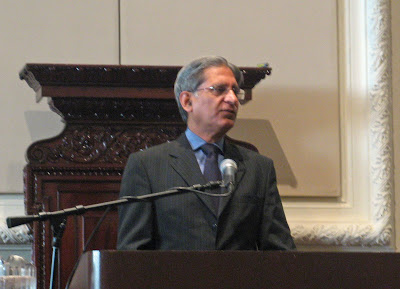 Last November, I posted about a rally, organized by the New York City Bar Association, in support of Pakistani judges and lawyers who had been detained or relieved of their duties by the government of General Pervez Musharraf. The principal speaker at that rally was Ali Ahsan, a Pakistan born attorney practicing in New York, whose father is President of the Pakistani Supreme Court Bar Association, and who had been imprisoned at the time.

Yesterday, Ali Ahsan's father, Aitzaz Ahsan (photo above), was greeted with a standing ovation at a morning meeting at City Bar headquarters. In the time since the November rally, he had been released from prison, where he and many other lawyers and judges had been detained under a statute that allows arrest and confinement "to prevent the commission of a crime" (or similar words), and elections had been held which resulted in Musharraf's party being relegated to a splinter group in Parliament. Nevertheless, the new government has not yet, for reasons having to do with coalition politics, rescinded Musharraf's order stripping the Supreme Court and many lower court judges of their jurisdictional authority.

In his address to the City Bar, Mr. Ahsan recounted his difficulties in acting as defense counsel for Chief Justice Chaudhry of the Supreme Court, which were increased by the proceedings before the judicial tribunal being held in secret. He revealed one interesting aspect of Pakistan's legal system when he said that, in briefing the appeal to the Supreme Court, he cited as persuasive authority court decisions from India, with which Pakistan has been in conflict since the inception of the two nations, along with decisions from Australia, the U.S., Trinidad and Tobago, and Belize. This is because all of these nations share with Pakistan the tradition of British common law, a tradition that evidently transcends national rivalries.

Mr. Ahsan was generous in his praise of American lawyers, and Americans in general, for their support of the cause of rule of law and human rights in Pakistan. He said this feeling of gratitude was shared by many Pakistanis, but that the silence of the Bush administration on the issue of reinstating the judges and restoring the rule of law had been unhelpful. He argued forcefully that the restoration of judicial authority was essential to the fight against extremist and terrorist organizations, as such groups thrive where people have no recourse to legitimate authority to adjudicate disputes.
Posted by Claude Scales at 10:25 AM No comments:

Mets demonstrate regression to the mean.

Statistics was about my least favorite field of study. What you learn is that, while wonderful things can happen, they are very unlikely; and, if they do, they are very, very unlikely to occur again anytime soon. Perhaps the most depressing statistical concept is regression to the mean. This tells you that, if someone has a history of doing badly, then suddenly has a run of success, that run will almost certainly end and s/he will return to her/his pattern of failure.

Back in May, the Mets beat the Yankees twice, at Yankee Stadium. One game of the three game series was rained out and rescheduled for this past Friday as part of a doubleheader, the first game to be played at Yankee Stadium and the second at Shea. Anyway, after the Mets swept their abbreviated series, I posted this celebratory piece, with the cautionary note, "just don't backslide". By writing this, of course, I was challenging the notion of regression to the mean, and regression prevailed, in a big way, as the Mets then dropped four straight to the Braves.

So, now, as I savor the Mets having won their season series with the Yanks, I see them regressing once again, dropping tonight's game to the Cards, 7-1, as John Maine has his turn in the starting rotation's frequently used barrel. The Mets thus also blew a chance to help the Cubs, a team I may have jinxed, who were swept this weekend by their Southside rivals.

Tim Marchman bets on regression to the mean in his column in the New York Sun about Ollie Perez.
Posted by Claude Scales at 11:11 PM 3 comments: