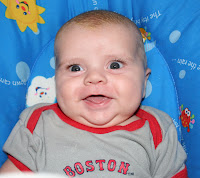 Schilling comes through in the clutch, and Drew sparks an offense that produced twelve runs. It's do or die for both teams tomorrow.

And it's at Fenway. Twiffer's baby is still smiling!
Posted by Claude Scales at 11:44 PM 2 comments:

The curse of Exit Nine: USF falls to Rutgers.

Or is it just the curse of being ranked second?

I really thought it would be Cincy that did them in. Oh, well. A BCS appearance is still very much in reach.
Posted by Claude Scales at 12:25 AM No comments:

Viva Beckett! Viva Youkilis! They've done it before; they can do it again. Schilling and Dice-K await their turns for glory.

Don't make me a liar, lads.

Update: Twiffer, as expected, comes up with the most eloquent case for Red Sox victory.
Posted by Claude Scales at 12:14 AM No comments:

A couple of days ago, I got a comment on an earlier post from Nadya, a classical pianist in Rio de Janeiro. She has a blog, Nadya, Musica e Outras Artes, which features superb videos of various pianists performing works by Bach, Brahms, Debussy, Ravel, Scarlatti and others. The text is in Portuguese, but you don't need to read it (you could try your hand at Babel Fish) to enjoy the music.

Since the Mets crashed and burned, and I declared my fealty to Red Sox Nation, at least for the duration of this post-season, the lads from Beantown made short work of Los Angeles de Anaheim, but now seem to have hit a speed bump in Cleveland.

My sweetie, a lifelong Fenway fanatic, was actually pleased by their loss on Saturday. She says that it's always better for them to lose early in a season or series; if they start too strong, they inevitably fade at the end. Last night she was less complacent. Tonight, I'm praying for an early Sox lead, followed by a swarm of gnats.

Two more huge upsets - Kentucky over LSU and the Beavers over the Dirty Golden Bear - cleared the way. South Florida's shellacking of eighty-miles-up-Interstate-4 rivals Central Florida (a little voice in my head suggests that running the score to 64-12 is bad for the Bulls' karma), along with Boston College's less calamitous victory over floundering Notre Dame (I never anticipated using those words together), convinced the sportswriters that USF should advance to the penultimate position (eleven of them voted the Bulls number one). The coaches who vote in the USA Today poll were, perhaps understandably, less impressed, making the Eagles second and the Bulls third.

The Fighting Illini fell to Iowa and from the top 25 in both polls, so ex-Gator coach Ron Zook goes from cheers to catcalls in Champaign.

For you poll hounds, they're here.
Posted by Claude Scales at 3:53 PM No comments: