Cyclones off to a good start.

I hope my posting this doesn't jinx them, but the Brooklyn Cyclones, the Mets' Class A New York - Penn League affiliate, have opened their season by winning a series with their across-the-Narrows archrivals, the Staten Island Yankees. This is a promising beginning to the second stint of Edgar Alfonzo as manager. (Edgar should not be confused with his brother, Edgardo, a former Met who now plays for the Long Island Ducks. Venezuelans seem to have an odd penchant for giving their sons similar names. Endy Chavez has a brother named Ender, who formerly played for the Cyclones.)

Update: Cyclones have now won two series in succession, the second from upriver rivals Hudson Valley Renegades, so their record now stands at 4-2.

My Dad often goes to Keyspan Park with the rest of his cronies from Avenue U. It's a great experience. Young kids getting their first taste of professional ball and that great ocean view.

Joe may be the only commenter on my blog who can link "Grand Opera" with "Port-o-San."
Posted by Claude Scales at 2:57 PM 3 comments:

A breeze batters branches;
the honey locust whispers,
¡Esperanza, esperanza!
On the harbor, tugs flit
on fathomless errands,
and beyond, the dentate skyline
no longer bears the memory
of Yamasaki’s towers, their image now
recumbent in brass at my feet.
A squirrel, brazen, fixes me
with blank eyes while lithe young women,
buttocks bobbing in tandem,
do pushups against a park bench.
Toddlers screech and stumble,
as nannies share news in lilting
island accents. The sun arches
on its marathon course as I turn
toward home. A gust rattles
the gingko: “It’s all downhill from here.”
Posted by Claude Scales at 11:04 AM 6 comments:

Email ThisBlogThis!Share to TwitterShare to FacebookShare to Pinterest
Labels: Poetry

Since I first posted this, I've learned more about Dolly Lyon's singing career, and obtained some of her recordings, so I've been able to rewrite this extensively. 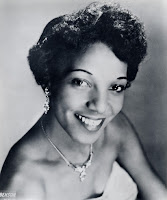 With her sparkling wide set eyes and radiant smile, she looked ready to take the world by dint of sheer charm. But that demure face belied a powerful, though honeyed, alto voice. There's little information available about this talented singer who was active in the mid to late 1950s. The most I've been able to find is here.

Evidently, her earliest recordings were as a singer with Erskine Hawkins and his Orchestra. Through web searches I was able to get two 45 RPM Erskine Hawkins records on which she's the vocalist on one side of each. These are both Decca promotional records (i.e. distributed free to DJs); one is identified in a discography as probably dating from 1956, the other, from its slightly higher sequential number, I presume is from about the same time. Hawkins' big band (best known for originating "Tuxedo Junction", although the version by the all white Glenn Miller Orchestra unfortunately eclipsed the Hawk's--in my opinion--superior rendition) broke up in 1953; after that, he played with smaller groups and his style evolved from the big band swing popular in the 1930s and '40s to the jump blues and bop that began to dominate the dance scene after World War II.

The two Hawkins records featuring Lyon as vocalist are "Waltz in Blue", which has a strong R&B flavor, and "Nobody Plays Piano Like Sacramento", an uptempo number which, as its title implies, has lively piano accompaniment. The piano is by Ace Harris, who had been with Hawkins since the big band days. Unfortunately, these records are well worn, obscuring the quality of Lyon's vocal performances.

Probably as a result of her work with Hawkins, Lyon came to the attention of Charles Merenstein, then of Apollo Records. He is nowadays remembered for having penned, along with Otis Blackwell and Jimmy Jones, "Handy Man", which was a hit for Jones in 1959 (love the Triumph TR roadster in the background) and later covered by Del Shannon and James Taylor. Merenstein recorded Lyon doing two songs released as a single in 1957, "Palm of Your Hand" and "Call Me Darling".

"Palm of Your Hand", the "A" side of the single, is a steady rocker that kicks off with two drumbeats, then joined by piano and sax, then by Lyon, whose voice is seductive and smoky, reminiscent of Peggy Lee but warm where Lee is cool. The sax is in a style like that of Willis "Gator Tail" Jackson (hear him on Papa Daddy accompanying his then wife, Ruth Brown). Indeed, it may have been him, as he was one of the artists who recorded for Apollo. "Palm" also includes a lovely, languid guitar bridge. (Thanks to cadlagh1 for the clip.)


"Call Me Darling" starts with Lyon's voice, initially a capella, sounding the words "call me", then joined by snare, piano, bass, and sax. Over this standard R&B accompaniment, her voice soars, dips, and sways, with occasional vibrato, at once flirtatious and precatory. This is slow dance R&B at its hug-your-sweetie-tight-and-shuffle-your-feet best. The song was also recorded by, among others, Peggy Lee, Tennessee Ernie Ford, and Ann-Margret.

Despite Merenstein's enthusiasm, neither "Call Me" nor "Palm" ever charted, though "Palm" made the "new records to watch" list at Chicago's WJJD for the week of October 13, 1958.

Merenstein later had Lyon front the Cellos, a five man doo-wop group out of the old Charles Evans Hughes High School on Manhattan's West 18th Street, on a song titled "Don't Wait", which could have been a contender for hottest teen romance novelty song of 1958, but was not released. It's the second song on the clip above, following the Cellos, sans Lyon, doing "Doo Doo Wah," (If you want to go straight to "Don't Wait," go to 3:06.) On "Don't Wait," Lyon's voice builds on the seductive quality heard on "Palm", and she manages to make the words "first date" sound like the prelude to a Neronian orgy. Maybe the song was just a little too spicy for its time. It's now available on a Cellos compilation CD that came out in 1992, "Rang Tang Ding Dong" (Relic 7029).

Prowling the back alleys of the web I managed to find one more Dolly Lyon 45: "Memories of You" and "Chattanooga Cha-Cha", on the Buzz label (this is evidently a long defunct indie label that was based in New York and not related to any similarly named outfit existing today, of which there are several). The record is badly worn, but it is possible to make out that Lyon's voice has taken on (I'm assuming, though there's no date on the record, that it was made after her Apollo recordings) even more of a smoky quality, edging into Billie Holiday territory. "Memories" is a standard slow R&B number, while "Chattanooga" is a shameless attempt to cash in on the cha-cha craze of 1957-58 by taking a jazz standard (see a clip featuring the Glenn Miller Orchestra, Dorothy Dandridge and the Nicholas Brothers here) and setting it to a cha-cha beat, which only makes it sound silly. It's an unfortunate end to what was a promising career. (There may have been a later recording. A record dealer in Michigan lists “Dolly Lyon—’I Feel It / Stop’ white disc jockey copy , xol ,Doe 104” in his inventory; however, when contacted, he said he couldn’t locate the record and may have sold it.) Update: thanks to Andrew Bohan, I now have a YouTube clip (audio with a still of the record label) of Lyon doing "I Feel It" on the Doe label:


"I Feel It" is a pedal-to-the-metal rocker featuring a frenetic vocal and a wailing tenor sax bridge. Lyon's voice sounds fresh, without the sultry, smoky quality it has on "Don't Wait" and on the Buzz recordings.

While Dolly Lyon is largely forgotten in her own country, judging by hits on my blog off web searches since I first posted this, I can say that she has something of a fan base in Europe and Britain, particularly in the north of England, where "Palm of Your Hand" is considered part of the Northern Soul canon, and in Belgium, where "Palm" is part of a popular but hard to define genre called popcorn.
Posted by Claude Scales at 11:55 PM No comments: 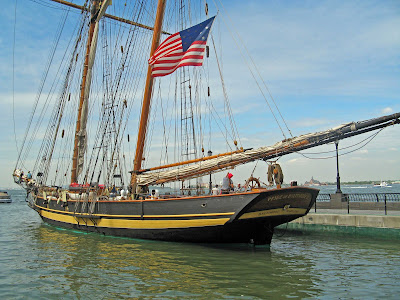 A few days ago I saw Pride of Baltimore II docked at the North Cove, Battery Park City. This evoked a bittersweet memory. In the summer of 1983, I was visiting Vancouver, and saw the first Pride of Baltimore docked there. Three years later, she was lost in a severe storm at sea, along with four of her crew.

Pride II, like the first Pride, is a replica of a ship named Chasseur which, under the command of Thomas Boyle, raided British shipping during the War of 1812. Chasseur exemplified a type called the Baltimore clipper, a topsail schooner with sharply raked masts set well aft, a long bowsprit and raked stern, and deep draft giving excellent ability to sail close to the wind. These characteristics made the clippers well suited for privateering, as well as for transporting aspiring prospectors around Cape Horn to California during the 1849 gold rush. Unfortunately, they also made them adaptable for the slave trade.
Posted by Claude Scales at 11:32 AM No comments: