Jerry Lee Lewis turned eighty on Tuesday. This is testimony to the wonders of medical science, or divine grace, or both. It reminds me of the joke about the old Vermont farmer who, when asked the secret to his longevity, said, "I always drink new rum and vote Democrat. One pizen neutralizes the other." (The story dates from the time when Republicans were progressives and Democrats reactionary racists. History takes strange turns.)


I saw the Killer live once. It was in the fall of 1979, and I heard that he was playing at a place on East 86th Street called the Lorelei that evening. I hurried there, thinking it was already sold out, but was able to get in. The Lorelei was a German beer and dance hall (East 86th was once the heart of a thriving German-American community) that had been bought by someone who tried to make it into a country music venue (the "urban cowboy" thing was big in '79). The place still had its original decor. Seeing and hearing Jerry Lee singing and pumping his piano under pictures of Mad King Ludwig's castles was close to a psychedelic experience.

Posted by Claude Scales at 12:17 AM No comments:

The Mets face a dilemma.

It has little to do with Matt Harvey's (photo) pitch or inning count. It has to do with whether to go all out to win their remaining regular season games in an effort to gain home field advantage in the National League Divisional Series they will almost certainly play against the Dodgers, or to rest their best players for the playoffs.

The Mets have a winning record (2-1) against the Dodgers in Dodger Stadium this season, but only an even record (2-2) against them in Citi Field. Looking at history, though, their lifetime record at L.A. is .408; at Citi it is .496 (yes, the years since the move from Shea have been less than rewarding until now). What does this tell us? Not much, other than a home field advantage is, as they say, a home field advantage. You do get that last half inning if you need it.

So, home field advantage may be worth something. Still, there is this recent New York Times piece that argues, with historical support, that being hot going into the post-season may actually be an omen of trouble in the playoffs, and vice versa.

What to conclude? I just want them to win. Now, and then.
Posted by Claude Scales at 11:37 PM No comments: 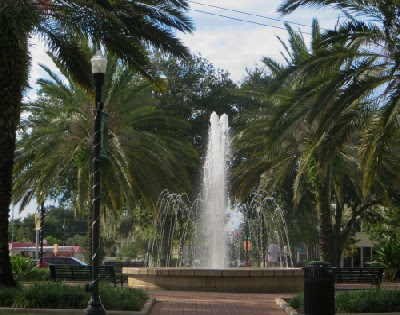 Winter Haven is a small city--population about 36,000--in central Florida. It's a little south and west of Orlando, east of Tampa, and west of Melbourne. It has fifty lakes within or touching its city limits, and is surrounded by citrus groves. One thing it has in common with New York City is a Central Park, with a fountain (photo above).

When I was a student at the University of South Florida I became friends with several fellow students who were from Winter Haven. I visited there on several occasions, and got to like the place very much. I even wrote a paper for one of my political science classes about its city government. (Don't ask me what my conclusions were; I've forgotten.)

From my Winter Haven friends, as I've noted before, I learned about Gram Parsons before he became famous. About two years ago, through social media, I reconnected with one of those friends, Steve Griffith. He told me that there was an effort to restore the Derry Down, the former "teen age night club" established by Gram's stepfather, initially to give Gram and his high school folk group a place to play. I then learned that the group restoring the Derry Down was presenting a "Cosmic American Music [Gram's term for his style, now called "Americana" or "Roots" or "Alt Country"] Festival," and I decided to attend.

I hadn't been to Winter Haven since 1967--48 years. In this post, I'll show some photos of scenes around town, all my photos except where otherwise noted. 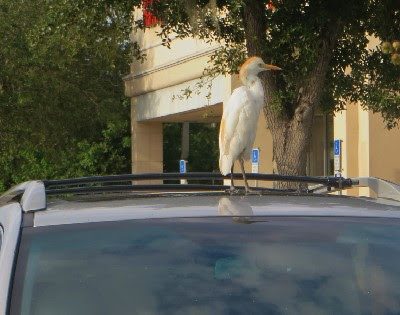 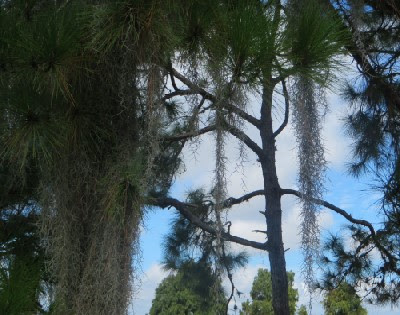 Another sign I'm not in the North: Spanish moss hanging from a tree. 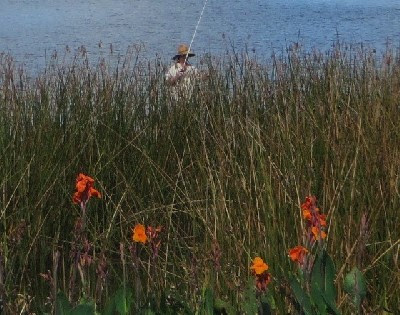 The shore of Lake Howard, the largest of Winter Haven's lakes, was a block from where I was staying. I spotted this fly fisherman working along its shore. He's standing on a small boat that's hidden by the reeds. 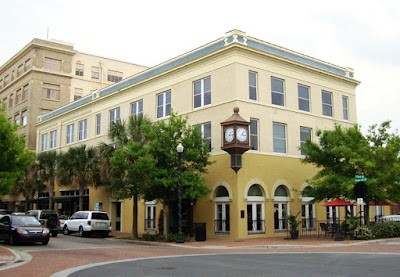 This handsome building is at the corner of Central Avenue and 4th Street NW. Winter Haven is laid out with lettered avenues going east to west and numbered streets going north to south, divided into NE, NW, SE, and SW quadrants; because this pattern is frequently interrupted by lakes, some circumscribed by drives bearing their names, e.g. "Lake Howard Drive," I once described a map of Winter Haven as a Cartesian grid superimposed on a piece of Swiss cheese. The building is called "Time Square," and was given that name by my friend Steve, who, inspired by the clock on its northwest corner, won a contest to name it when he was eleven or so. I don't recall what prize he won. Photo: LoopNet.com 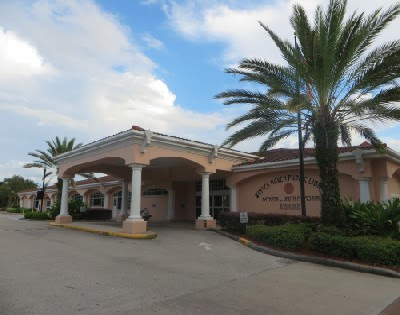 As a bibliophile, I believe you can tell a lot about a city by the quality of its library. The Kathryn L. Smith Memorial Library, done in the Spanish colonial style popular in Florida, looks impressive and capacious. I wish I'd had time to explore inside. 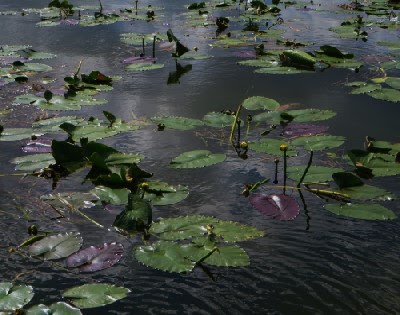 Lily pads near the shore of Lake May. 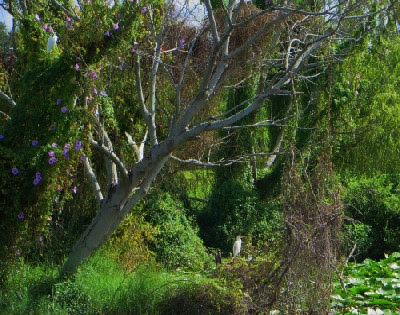 Another solitary egret perched by the lake shore.

I'll be doing another post soon about the Cosmic American Music Festival and some of the groups and musicians I saw, heard, and met there.
Posted by Claude Scales at 5:27 PM No comments: