I'll rerain from complaining, if only to ensure domestic tranquility. After all, the Mets could afford to lose three, and every Sox win is another nail in the Yanks' coffin.
Posted by Claude Scales at 11:11 PM No comments:

I had to visit the office this afternoon to take care of some unfinished business, and on the way there and back I heard the following:

1. Otis Redding: "Can't Turn You Loose." From Live in Europe, one of the best live albums, and best R&B albums, ever.

2. Planxty, "As I Roved Out." A folk song on which there are many variations. Am I right in thinking that "the lassie who had the land" is Victoria R.? The last verse seems to confirm it.

3. The Yardbirds with Sonny Boy Williamson, "Pontiac Blues." Choice fruit of one of several collaborations between British bands and great Chicago bluesmen that happened in the late 1960s.

4. Jimmy Cliff, "Sitting in Limbo." From the magnificent The Harder They Come soundtrack.

5. East Village Opera Company, Ebben? Ne Andro Lontana. My wife turned me on to this group, who set opera arias to rock instrumentation and arrangements. If you're heavily invested in how this music ought to sound, you'll probably hate it. I like it.

6. John Stewart, "Never Goin' Back." The final cut on California Bloodlines (see iPod log 1), in which he gives the credits aurally.

7. The Kingston Trio, "Run the Ridges." I told you the iPod can be uncanny at times. Here, it follows John Stewart on his first solo album with John Stewart as lead singer for the Trio, several years before, in a stirring song about two former Confederate soldiers on the outlaw trail.

8. Rod Stewart, "Mandolin Wind." Egad! Another Stewart. This time it's Rod the Mod, from Every Picture Tells a Story, my nominee for Greatest Rock Album Ever.

9. Beausoliel, "Eunice Two Step." I defy you to stay still while listening to this Cajun dance tune par excellence.

10. Dire Straits, "Walk of Life." A sign at Radio City Music Hall tells me Mark Knopfler and Emmylou Harris are in some sort of collaboration. That bears watching.

12. Fairport Convention, "John the Gun." From their Fairport Live album, released in the U.K. as A Moveable Feast, and recorded in London and Sydney during the same 1975 world tour in which I saw them at Carnegie Hall. When the curtain went up, I was surprised to see Sandy Denny, who had left the group several years before, seated in front of a grand piano. A man several rows away yelled "Welcome back!", and Sandy, with crisp British precision, chirped back, "Thenk you!"

13. Paul Butterfield Blues Band, "Spoonful." This racially integrated Chicago group provided my introduction to the blues during my college years.

14. Martha and the Vandellas, "Heat Wave." It was typing speed and telephone manners that got Ms. Reeves her job at Motown Records, but she proved to have other talents.

15. The Beatles, "I Feel Fine." I first heard this blasting from a neighbor's dorm room in the spring of 1965, and it had its intended effect.

17. Johnny and the Hurricanes, "Red River Rock." Pumping organ, driving guitar. Rock instrumental music at its best. (Someday I'll have to find a download of their "Beatnik Fly.")

19. The Byrds, "Time Between." From Younger Than Yesterday, the album on which they started to go seriously country.

20. The Byrds, "You Don't Miss Your Water." From Sweetheart of the Rodeo, the album on which Gram Parsons joined them, they went completely country, and Roger McGuinn had his doubts.

21. Planxty, "Pat Reilly." A cautionary tale about the consequences of having one drink too many in the company of a military recruiter.

22. Bruce Springsteen, "Open All Night." A song in which The Boss describes his native state as "like a lunar landscape."

24. Planxty, "Merrily Kissed the Quaker." A lively instrumental piece featuring, along with uillean pipes and bodhran, that quintessentially Irish instrument, the bouzouki.

A few weeks ago, my wife took a tour of Woodlawn Cemetery, where many of New York's prominent citizens of yore are interred. Woodlawn is in the northern Bronx, next to Van Cortlandt Park, and therefore at the northern edge of New York City. At the time that most of its inhabitants took up residence, however, it was part of New York County (which today consists of Manhattan and a tiny bit of the mainland cut off from Manhattan when the Harlem River's course was changed by blasting to improve navigation) but not part of the City. In other words, it was suburban. A Scarsdale for stiffs, Bronxville for bones, Pelham for the perished.

The day of the tour, the weather gods cooperated by providing a suitably gloomy overcast and light but steady rain. Fortunately, my wife had her camera to record the tour. Here's the group entering the cemetery: 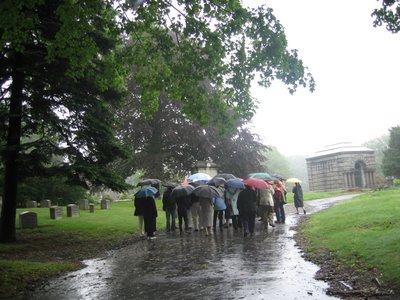 The gravestones, as you might expect, are classical in style and quite elegant. Consider this, which may belong to the family of an early steamboat enterpreneur: 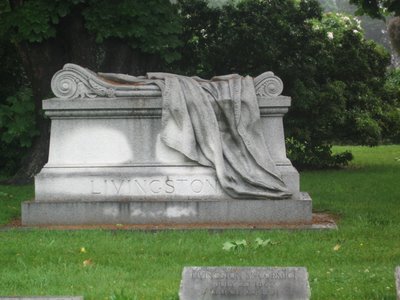 Or this bronze frieze, in a romantic style, of a recumbent youth: 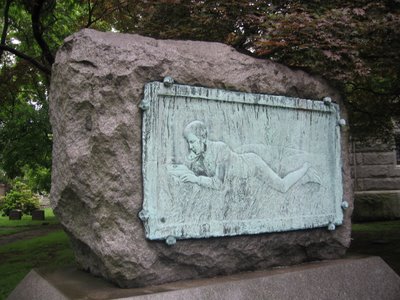 Many of the prominent families have mausoleums. This classical temple houses the remains of the Julliards, remembered principally for their patronage of the great music school that bears their name: 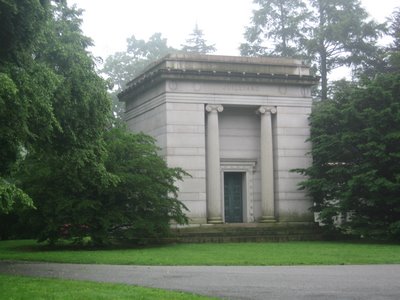 Today, the fashion for elaborate crypts seems gone. Perhaps that's a good thing. Still, Woodlawn is something to behold.
Posted by Claude Scales at 9:22 PM No comments: