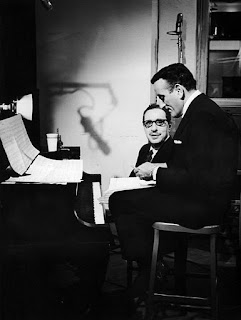 Tony Bennett, born Anthony Dominick Benedetto in Astoria, Queens ninety years ago yesterday, will appear on stage with Lady Gaga at Radio City Music Hall on September 14. Meanwhile, he will appear at the Fox Theater in Detroit on August 12 and at the Ravinia Pavilion in Highland Park, Illinois on August 13. In October, he'll be back on the road, performing at the Rama Casino Resort in Ontario, Canada on the seventh and the following night in the Kodak Hall at the Eastman Theatre in Rochester, New York. On the 23rd he'll be at The Segerstrom Center for the Arts in Costa Mesa, California and on the 28th at Overture Hall in Madison, Wisconsin. Not bad for a nonagenarian!

The photo shows him in profile, in 1964 with the composer Harold Arlen.

My choice of a song to commemorate this event is perhaps a banal one, but I love the song anyway. The clip below shows him singing it at the sprightly age of 85:


Addendum: I've now learned, thanks to the Brooklyn Eagle, that the song was written right here in Brooklyn Heights by an expatriate San Franciscan gay couple who were feeling homesick. The story of how Bennett picked it up, and made the couple rich enough to move home, is wonderful.