Stephen Bruton was an immensely talented guitarist, singer and songwriter who was part of the Texas generation and milieu that produced Jimmie Dale Gilmore, Janis Joplin, Kris Kristofferson, Delbert McClinton and many other great musicians, including his close friend T-Bone Burnett, at whose house he died this morning. His music incorporated influences of blues, bluegrass, country, jazz, norteño and rockabilly.

The clip above shows him recording his song, "Getting Over You." This song was also recorded as a duet by Willie Nelson and Bonnie Raitt, and released on Willie's album Across the Borderline.

Update: Here's an excellent memorial piece on austin360.
Posted by Claude Scales at 11:48 PM No comments:

How are the (no longer Grateful) Dead like the Bank of America?

Michael Simmons gives the answer in this piece from LA Weekly.
Posted by Claude Scales at 12:33 PM 1 comment:

The Cascades, Grace Jones, and John Fogerty on rain.

After a short break, the rain that was the City's companion for the past four days has returned. One of my Facebook friends commented a couple of days ago that she was "listening to the rain." This prompted me to reply with a link to a pop chestnut from my senior year of high school, done by a group, the Cascades, who got started in the Navy, were named for a laundry detergent and, at the time this song was recorded, had Glen Campbell on guitar (clip by ksabond):

My friend responded with this Grace Jones number (clip by v1rtu050):

As the rain continues its seemingly endless plinking on my air conditioner, I can only think of this Creedence hit from my law school years, here in a post-Creedence version by John Fogerty (clip by masigon):

Attila, lord of all he surveys. 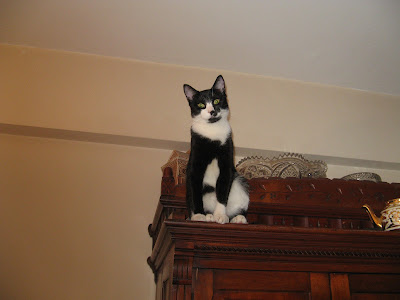 Still, his sister got there first.

(Posted in response to my mother-in-law's request for more cat pix.)
Posted by Claude Scales at 8:28 PM No comments: