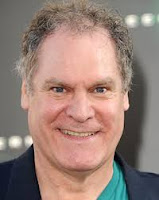 I saw this play, a new adaptation of Anton Chekhov's classic, in previews several weeks ago, and meant to post about it, because it is magnificent. Unfortunately, life got in the way of doing the post. Now I've learned that its run has been extended until October 28, so I've got my chance to tell you how great I think it is, and urge you, if you're in the New York City area between now and the 28th, to go and enjoy it.

My initial motivation to see it was that my friend Jay O. Sanders (photo) plays the title role. My wife and I have known Jay, and his wife Maryann Plunkett, since our daughter and their son, Jamie Sanders, now having a successful acting career of his own, were friends in elementary school. I was also attracted by its being directed by Richard Nelson, two of whose Apple family plays, also featuring Jay, along with Maryann, I saw staged at the Public Theater. "Staged" is a misstatement here: Nelson likes to set his plays on a floor with seats surrounding it; the front row of seats is on the same level as the actors. Nelson is a master of intimate family drama, and this "theater in the round" presentation, in which the actors sometimes turn to address the audience directly, makes it all the more intimate. This does very well for Chekhov's play, which has the same intimacy as Nelson's earlier family dramas.

For criticism, I can't do better than Ben Brantley in the New York Times. I want to add a special mention of Yvonne Woods, who plays the part of Vanya's niece, Sonya. The entire cast (Jay, whom Brantley credits with "a career high performance," included) is brilliant, but Ms. Woods anchors the play. Her subtly presented story of a life of unsatisfied longings, endured stoically ("pinched with care" is Brantley's description), seemed to me, despite Vanya's cry from the heart near the play's conclusion, the most eloquent presentation of the tragic circumstances in which all the characters have put themselves. Her centrality is emphasized by the list of characters in the play's program, in which all but her and Astrov, the physician for whose love she unsuccessfully longs, are defined by their relationships to her. She is the only one who can call Vanya "Uncle."
Posted by Claude Scales at 10:57 PM No comments: