The Mets are no longer first in their division. 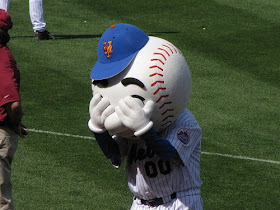 I started to write this when they were only a half game behind the Phillies. Now, with a second loss to the Phils, they are a full game and a half behind, and tied with the Braves for second place.

The Mets showed tenacity in holding on to first place through most of the season to date, although for most of the season this has been enabled by their being the only team in the NL Eastern Division with a winning record. The Phils and Braves now have records in the winning column, both thanks in part to the Mets, and the Mets are now a mere two games over .500.

As the All Star Break ended, it was widely believed that the Mets were facing bleak prospects, as both ace pitcher Jacob deGrom and hard hitting shortstop Francisco Lindor had gone onto the disabled list. Coming off the break, they lost two of three to the Pirates, then won two of three from the Reds and two of three from the Blue Jays. Things weren't looking so bad. Then they lost three out of a five game series with the Braves, two out of three to the Reds, then three out of four to the Division's bottom dwellers, the Marlins. During this unhappy period, Taijuan Walker, the pitcher who had shown early promise with seven wins, was tagged with two losses. This brought them to the series with the Phils, in which they have now lost two straight.

Mike Petriello analyzes the Mets' stats for the year, and gets rid of some theories about why they underperform on offense. I've long thought they are particularly bad in "clutch" batting situations, but he shows they aren't especially so compared to other teams this season. What he brings it down to is something that has bedeviled the Mets over the years: injuries. Why are the Mets so prone to injuries? I attempted an answer here.

What are the Mets' chances now? I think they're pretty slim. Things may improve a little when de Grom and Lindor come back. If the Braves and Phils both fade, there's even a possibility the Mets could be divisional winners. If they don't win the division, there's hardly any chance of their being a wild card team, given the records in the other divisions. If they do get to the first round of the playoffs, they will be up against a team, whoever it is, with far better statistics. Do statistics tell all? Not always.

That all said, I gotta believe!

Update: the Mets are down 3-0 to the Phils in the bottom of the 7th, while the Braves are leading the Nats 5-1 at the top of the 7th. Barring late inning magic in both games, the Mets will be relegated to sole possession of third place in the NL East.

Posted by Claude Scales at 11:21 PM No comments: