I was shocked, while skimming the news a while ago, to come across this Reuters story announcing the death of my law school classmate, Bruce Wasserstein. I hadn't seen Bruce since a class reunion almost twenty years ago; at the time, it struck me how fit he looked compared to the chubby youngster (he started law school at 19, two years younger than most of his classmates, and three years after entering the University of Michigan at 16) I had known from classes and the occasional shared lunch table twenty or so years before. Until I saw the Reuters story, I didn't know about the recent concerns over his health, or the heart irregularities that put him in the hospital several days ago.

The Bruce I knew back in the day was a committed leftist who had been active in Students for a Democratic Society ("SDS"), the pre-eminent student radical organization of the 1960s, as an undergraduate at Michigan. I was surprised when he told me that he was entering the newly announced joint J.D./M.B.A. program, which entailed spending an extra year in Cambridge taking courses at the Business School. He needed, he said, to understand the workings of the system he opposed. For a time, he worked for Ralph Nader, and put his business degree to use in heading the team that produced Nader's critique of Citibank, a thick, statistics laden book the cover of which was adorned with a cartoon pig.

I was surprised, but not shocked, when I heard he had gone to work for Cravath, then and now perhaps New York's most prestigious corporate law firm. The Cravath partnership included several prominent former Kennedy New Frontiersmen, and some who had been student radicals of the '60s were settling into similar career paths, perhaps rationalizing that they could do more good (and make some money in the process which, of course, could also be put to good use) by working inside the system. His leaving Cravath for investment banking, initially at First Boston, also seemed a logical move. By then, I had pretty much lost touch with him, but assumed he still was on the left politically. I was disabused of that notion in 1980, when I volunteered to work on a law school fund raising telethon, and Bruce showed up with a stack of invitations to a fundraiser for Mark Green's congressional campaign. Mark had been Bruce's closest friend in law school and after that a fellow Nader Raider. As he passed around the invitations, Bruce said, "Friendship compels me to do this, but I hope no one here is still a liberal Democrat."

Bruce was preceded in death by his younger sister, Wendy, a Tony and Pulitzer winning playwright, who succumbed to lymphoma at the age of 55. He adopted her young daughter.

I'm impressed by the succinct comment made by "JHL" in response to the piece in today's New York Times Deal Book blog:

Good banker. Created value for clients. Sine qua non of banking, but he would have offered more over time. Peace.

I, too, think "he would have offered more." I envisioned his winding down his frenetic deal-making and, re-kindling his youthful fervor for social justice, applying his tremendous intelligence and practical know-how to some grand project or projects for which he might be remembered long after the RJR/Nabisco and Time/Warner deals are forgotten.
Posted by Claude Scales at 11:07 PM 1 comment:

Email ThisBlogThis!Share to TwitterShare to FacebookShare to Pinterest
Labels: Friends 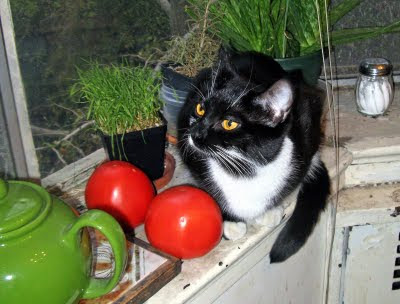 Hepzibah at one of her favorite perches, next to the wheatgrass on which she and her brother, Attila, love to graze. (Photo by Martha Foley.)

Dolly Trolly wants you for an indie band angel.

Dolly Trolly (clockwise from top left: Sam Trioli, bass, guitar and piano; Tara Lynne Mallon, rhythm guitar, keyboards, percussion and vocals; Tami Johnson, drums and vocals; and Gerard Kouwenhoven, lead guitar, bass and vocals) is a Brooklyn-based band with a self-described style--"Indie/Southern Rock/Pop"--that caught my eye. Having listened to their songs on their MySpace Page, I'm convinced of this group's potential. In some of their vocal harmonies and guitar work I hear echoes of the early Byrds, and their arrangements bring to mind Smiley Smile and later Beach Boys, so perhaps the "Southern rock" refers to Southern California (although when Tara Lynne dons the blonde wig and shades she bears some resemblance to Marshall Chapman).

They're now appealing for funds to complete their demo CD; counting, in these fraught economic times, on their fans to come through for them. Their appeal is stated in a video, no longer available, that used as its musical background the song "Night":

In order to raise the $2,799 (of which $820 has already been pledged) needed to complete the project, the band is asking for pledges (which will only be called upon if they reach the goal by 9:00 A.M. on November 9), for which they are offering rewards based on the amount of the pledge (the rewards are also presumably contingent on their meeting the $2,799 goal by the stipulated date). These are described in detail on this web page. A pledge of only $9 gets you a CD; $25 an autographed CD and a t-shirt. Above that, the reward selection becomes a veritable narcissists' candy store. A $50 pledge gets "props mobile", meaning the band will dedicate a song you choose to you at all their performances, and $150 will have you listed as an "executive producer" of their CD. Pledge $200 and they will write a song about the subject of your choice, list you in the song credits, and dedicate it to you at their three subsequent performances. For $300, you get the "YOUniCyCle" award, which means the group will write a song about you; and $500 gets you a starring role in their next music video.

Update: Dolly Trolly reached their goal on Kickstarter and their CD, Tiny Love Pieces, was produced. (I have a copy, signed by the then band members.) The band still exists, though reduced to three members: Trioli, Mallon, and Johnson.
Posted by Claude Scales at 11:23 PM 1 comment:

It's official. I'm a Yankee fan for the duration of the ALCS, and maybe for the Series. Sorry, Twif; I hope you enjoy your quality time with Lil' MacDuff and Harold.
Posted by Claude Scales at 11:03 PM 2 comments: