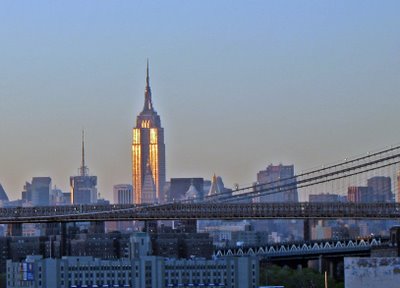 ... here is Shreve, Lamb & Harmon's masterpiece catching the rays of the setting sun.
Posted by Claude Scales at 10:44 PM No comments:

John Kenneth Galbraith died yesterday, at the age of 97. I saw him once, during my law school sojourn in Cambridge, walking across Harvard Yard. There was no doubt; the six foot eight inch frame and angular face were unmistakeable. I read only one book of his cover-to-cover. It wasn't his best-selling critique of post-World War 2 American capitalism, The Affluent Society. Nor was I one of the fifty or so people (in his estimation, according to his obituary in today's New York Times) who read his one book-length attempt (successful, again in his estimation, as well as that of the Times writers) at technical economic analysis, A Theory of Price Control.

The book I did read was The Scotch, a memoir of his coming of age among the farmers of Southern Ontario, of whom his parents were exemplary. I suspect this little book is typical of Galbraith's ostensibly non-economic writings (he has also written three novels and was co-author of a study of Indian art) in that it is laden with implications concerning what used to be called (and what Galbraith might most accurately be described as having taught and written about) "political economy". The one that sticks with me from The Scotch is that a requisite of a liberal political and economic dispensation - using "liberal" in the contemporary American sense of "generous" as well as in the classic European sense of "characterized by individual liberty" - is the ascendancy of people of "substance". By "substance" he didn't mean wealth (though the Calvinist beliefs of these descendants of Scottish Presbyterian emigrants made them see worldly success as indicative of divine grace), but personal integrity.

The Scotch included an anecdote Galbraith told on himself that was illustrative of the local character. He was, he recalled, sitting on a rail fence beside his family's cow pasture. Next to him was "a compact, honey-haired girl" on whom he had a high school crush. As they watched, OAC Pride, a prize bull his father had bought from the Ontario Agricultural College, gave his attention to one of the cows. "I'd like to try that sometime," said young Ken wistfully. "Well," the girl answered," it's your cow."
Posted by Claude Scales at 4:21 PM 1 comment: