As a long suffering Mets fan, I know that the only conclusion to draw from this is: the Mets will win their first series this season against the Yankees.

Kudos to Wright, Chavez and Heilman.

Bosox: Great first game, but what happened in the second?
Posted by Claude Scales at 10:18 PM No comments:

As a long suffering Mets fan, I know that the only conclusion to draw from this is: the Mets will not be swept in their season series with the Yankees.

Kudos to Perez and Chavez.
Posted by Claude Scales at 10:08 PM No comments:

I have a reflexive distrust of scientists who claim to be victims of misunderstanding, and compare themselves to earlier "crackpots" like Galileo or Einstein. Nevertheless, I found this story interesting, if only because Professor Woodall is on the faculty of a respectable university* and I'm beginning to believe just about anything bad about the executive branch of the federal government these days. This does seem to have more traction than cold fusion, even if, like the solar powered ship, practical application seems a way off.

It's not so far off, however, as any prospect of our tapping into the ultimate source of clean energy.

Meanwhile, it's nice to know that you can do a little bit for the environment just by sucking down a tube of Foster's.

*Yeah, I know, there's a guy at Harvard who believes in alien abductions.
Posted by Claude Scales at 3:01 PM 4 comments:

Email ThisBlogThis!Share to TwitterShare to FacebookShare to Pinterest
Labels: Environment 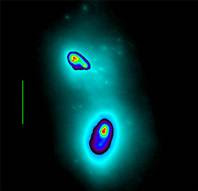 Further to an earlier post about the eagerly-awaited Milky Way/M31 (Andromeda) smashup (don't hold your breath), here's an interesting piece about what sometimes happens when galaxies collide. (The image above, by Max, Canalizo and deVries of the University of California at Santa Cruz, taken with the Keck 2 telescope in Hawaii, is an infrared picture of NGC 6240, a system of two galaxies in collision.)
Posted by Claude Scales at 9:28 AM No comments:

The problem with interleague play.

I've never been keen on it, but not as intolerant of it as I am of the designated hitter rule. With his usual acuity, Tim Marchman lays out three bad reasons and one very good reason for hating it.

I may feel differently if the Mets sweep the Yanks this weekend. I also take comfort in seeing that the Braves will be at Fenway.

Update: Schadenfreude supports my opposition to the DH (click on "comments" below), but Twiffer rehashes his old and unpersuasive argument for it (see our dialogue here - unfortunately, this is from the time when Blogger Beta was labeling all comments "anonymous").
Posted by Claude Scales at 5:40 PM 4 comments:

They improve with age. One of the delights of the electronic medium is one's ability to go back and edit what one has already published. For example, earlier today I posted on Brooklyn Heights Blog about a play some neighbors of mine are producing and directing. After hitting "post", I went to the blog and re-read what I'd done, noted a few punctuation glitches, and corrected them. Then the Blog's Editor-in-Chief read it and made a few changes, including adding some category tags. Next, I e-mailed a link to the play's producer, who responded that she liked the post very much, but added a factoid of interest that I didn't know. This I added to the post. A few minutes ago, I went back to it and re-read, finding a few infelicities of wording that I corrected. So, a post that first was published at about 1:30 this afternoon has already gone through four revisions.

Of course, one can also append updates, addenda or corrections to posts, as I often do, usually because of comments I've received. Blogging should, at its best, be a collaborative effort.

Update: I've already made one correction to this post (capitalization typo corrected) less than ten minutes after it was first published.
Posted by Claude Scales at 5:28 PM 1 comment: 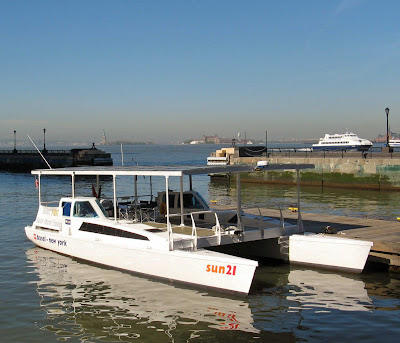 Sun 21, shown above, arrived at the North Cove yacht harbor, Battery Park City, on May 8, having begun her somewhat circuitous voyage in Basel, Switzerland, last November. She sailed down the Rhine to the North Sea, around the west coast of Europe and up the Guayaquil River to Seville, Spain, back to the Atlantic and the Canaries, across the ocean to Martinique, up the Antilles to Miami, and up the U.S. east coast to New York. You can see video accounts of her voyage using an interactive map on this site.

The immediate practical significance of this isn't great; much remains to be done to make solar power of the type used on Sun 21 (using solar panels to power electric motors) economical for large commercial vessels. Indeed, the claim that hers is the first "solar powered" crossing of the Atlantic isn't strictly true: since the wind is caused by the sun's heating of the atmosphere, all sailing vessels can be said to be "solar powered". Still, it's an encouraging development.
Posted by Claude Scales at 12:58 PM 1 comment:

Exile to the exurbs.

That could be our fate. The good news is, we have five billion years to prepare.
Posted by Claude Scales at 11:27 PM No comments:

Time to eat some crow.

Was I really so dismissive of Oliver Perez's potential when the Mets got him in a trade for Xavier Nady last year?
Posted by Claude Scales at 11:12 PM No comments:

Was T. Rex a basso profundo?

Get the low-down here.
Posted by Claude Scales at 9:31 AM 1 comment: