Harry Chapin grew up in the neighborhood I've called home for the past 32 years, Brooklyn Heights. His singing skills were honed in the Grace Church Youth Choir and the Brooklyn Boys Choir. He died in a car crash in 1981, two years before I moved here.

I found his first hit, "Taxi", unsettling. It charted in 1972, as I was near the beginning of my career, and its story of youthful dreams washed away in a cold bath of reality was scary. I did like the song's having a narrative arc. Most of Chapin's songs were like this; he gave his third album for Elektra the title "Short Stories." One of the songs on that album is "W*O*L*D":

I first heard "W*O*L*D" on WNEW-FM, then New York's great album-oriented rock station, sometime in 1974. The DJ (was it Vin Scelsa?) wondered aloud if the title was a play on WNEW. That would seem logical, Harry being a New Yorker, but the song was about being a DJ at a small town top 40 AM station. Like "Taxi" it's about growing older and facing that frigid reality bath, with respect both to career and relationships.

Harry Chapin wrote most of the songs he recorded (although his only number one hit, "Cat's in the Cradle," was written by his wife) and therefore can be considered part of the genre of "singer-songwriters" who became popular in the late 1960s and early '70s; other examples are Joni Mitchell and James Taylor. Rock critics were, as a rule, disdainful of this group. Reviews of their work often included descriptors like "precious" and "self-indulgent." Lester Bangs, in an essay titled "James Taylor Marked for Death," wrote:


DECIDE whether you want to jump and caper with music that's alive or molder in the Dostoyevskian hovels of dead bardic auteur crap picking nits out of its navel and so sickly that to see it shake its ass would be a hilarious horror indeed.

As I've recounted in an earlier post, one night at the Bells of Hell I had a "Bless me, Lester, for I have sinned" session in which, among other things, I confessed to liking Gordon Lightfoot. Lester's response was, "Hmph! I know Gord. Do you know what he does when he needs inspiration to write a song? He goes to the hardware store and stares at the labels on cans of paint." He didn't give me a penance; if he had, it would probably have been to listen to something like the album Blank Generation by Richard Hell and the Void-oids five times. I did go through my set of Lightfoot albums looking for song titles incorporating color imagery, but came up blank.

Lester, if you've broken away from frugging on the head of a pin long enough to read over my shoulder, please understand that there are times when I "want to jump and caper," but also times when I want to sojourn in "Dostoyevskian hovels." In other words, I'm not taking "DECIDE" as a command. No disrespect: to be true to what one believes is most admirable. I am made of less adamant stuff. And Harry, if you're having a peek, the only thing I can't forgive is your having unwittingly launched the career of Billy Joel, who tried to channel you in his first hit, "Piano Man".
Posted by Claude Scales at 1:04 PM No comments: 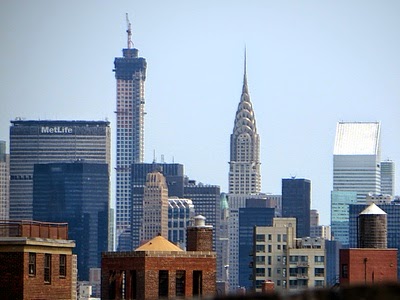 I first saw New York City in December of 1951. I was five years old, and my mother and I came here to embark on the S.S. Washington for a voyage across the Atlantic to join my father, an Air Force officer who had been sent to England for a tour of duty. We were in town for a couple of days before we boarded the ship, staying at the Henry Hudson Hotel on West 57th Street. The hotel was, at that time, used by the government for military personnel and dependents awaiting shipment overseas. It was convenient to the liner docks along the Hudson River; in 1951, almost all transatlantic travel was by sea. Our room faced an air shaft, and spanning the shaft was a steel girder with a flat top and a gently arched underside. I thought it looked very "New York."

We had dinner at Longchamps, where I was given a "Manhattan," which was ginger ale with a splash of grenadine and a maraschino cherry, served in a Martini glass. I felt very sophisticated. Longchamps is long gone.

The high point, in two senses of the word, of my first stay in New York was going to the observatory on the Empire State Building. I looked down and saw the R.M.S. Queen Elizabeth, then the world's largest ocean liner, docked at the Cunard pier on the West Side. Looking to the north and east, I saw the Chrysler Building, with its spiked helmet top, almost at eye level and a good deal taller than anything else in that direction, including the (then) RCA Building in Rockefeller Center.

The photo above shows midtown Manhattan, circa a year ago, as I photographed it with a zoom lens from the Brooklyn Bridge. Much has changed since 1951. Of the large buildings visible in Midtown, only the Chrysler Building remains from that time, and it was being overtopped by 432 Park Avenue, ten blocks further uptown. The overtopping is now complete, and I've expressed my dismal opinion of it here.

As I noted in my post about 432 Park, I'm distressed about the displacement of mostly young, creative, artistic people from what had been their traditional haunts, starting with Greenwich Village, where I used to live, and for which I blame myself, having been one of the yuppies who spelled its doom by enabling landlords to charge higher rents. I've reminisced about the Village, or at least about a particular bar, here; my friend Dave Coles and I have have both mourned it here.

I started this post over a year ago, but got distracted by other things, as well as by my inability to see where it might be going. It's still a work in progress; I'm going to let this be a teaser for some later posts in which I'll try to discuss the issues more extensively and, I hope, intelligently. I have been spurred to thinking about these matters by a couple of pieces by people I like and respect: one is Tim Sommer's "New York City and Taylor Swift (or How I learned to Stop Worrying and Love Change)"; the other is Francis Morrone's "No, New York City is not Losing its Soul". Both make interesting, provocative points that I will return to in later posts. Morrone, in particualr, points out that I'm giving myself too much credit--or should that be, claiming too much blame?--for the demise of bohemia in the Village. That process, he writes, began long before I arrived.

I've stolen the title for this post from an album by Eric Andersen, a singer whose songs I've long loved.

In the clip above he sings "Violets of Dawn," probably his best-known (and often covered) song, on Shawn Henderson's radio show "Stay Tuned," on November 5, 2010. As one of the commenters on another YouTube clip that is no longer available, of Eric doing the song at a cafe in Woodbridge, New Jersey puts it:


Eric is one of very few artists I've heard that over time has adapted his songs to his voice. His voice now works perfectly with "Violets Of Dawn", a little fragility that resonates with beauty. His "young voice" worked with this song also, but I love that Eric can sing this 50 years on or so and it sounds just amazing. Bravo!

Maybe Woodbridge, or some place like it, is where you have to go now to get the music characteristic of a Village venue in the 1960s. Or, as Bob Dylan put it, on "Talkin' New York" back in 1961, "So long, New York; howdy East Orange."
Posted by Claude Scales at 12:40 AM No comments: