Thank you, MSNBC, for defying authorities academic and municipal by continuing to call the Florida-Georgia game by its proper name, the World's Largest Outdoor Cocktail Party. The Gators came back from their defeat by Auburn, and with two weeks' rest, to continue their recent dominance of the Dawgs. They did this despite an offesnse that keeps sputtering, and a placement kicker who's now in Coach Meyer's doghouse. Next week's opponent is Vandy, which upset Georgia a couple of weeks ago. Florida needs to avoid their usual letdown after a big win (any win over Georgia is big for them), or they may find their top ten ranking scuttled by the Commodores.

FSU, which saw its ranking go a-glimmering long ago, got edged by the Terps to stay in the cellar of its division of the ACC. Mike Celizic is calling for Bobby Bowden's head. He lists several possible replacements, including USF's Jim Leavitt. Speaking of which, the Bulls have a week off to regroup from their disheartening, error-blighted loss to Cincinnatti. Next saturday, they face Pitt.

The Cardinals of the RBL (Real Baseball League) defeated the Tigers of the DHL (Designated Hitter League), four games to one.

Update: Twiff avers that crow can be "mighty palatable" so long as its served "with the right sauce". (I wonder if he means the "authorative" sauce they used to serve at Hoboken's late, lamented Clam Broth House?) He also advances the theory that "sweeping the LCS dooms you in the Series".
Posted by Claude Scales at 11:33 PM 1 comment:

I'd have guessed that, since my father's death, I was the last Claude Scales left on earth, much less the U.S. Thanks to a site called "How Many of Me?", I know there are likely to be six in this country. Try it and find out how many Americans probably share your name.

(I thought I got this link off Instapundit, but now I can't find it there. If, as my wife says, it's a case of its being right in front of me and my not being able to see it, my apologies, Glenn.)
Posted by Claude Scales at 11:05 PM 1 comment:

Email ThisBlogThis!Share to TwitterShare to FacebookShare to Pinterest
Labels: Self-Absorption

Another rousing cheer for Stephenie Hollyman

I'm very impressed by this slide show of McAllister tugs, and their crews, docking ships in the Port of New York/New Jersey.

The ship named Patagonian Mystic, seen in the slide show, brings to mind a comment by a friend who grew up in Detroit and used to watch ships sailing by on the river there. He observed that a typical name for a Greek-owned, Liberian-registered "salty" (an oceangoing ship that sails into the Great Lakes through the St. Lawrence Seaway) might be Unicorn Slaughterhouse. (Come to think of it, I've seen Beluga Indication among the names of vessels in transit on the Seaway's vessel transit map.)

Does anyone have any other amusing or interesting ship names to offer?
Posted by Claude Scales at 2:35 PM No comments:

Email ThisBlogThis!Share to TwitterShare to FacebookShare to Pinterest
Labels: Maritime

Take it.
Posted by Claude Scales at 1:53 PM No comments:

Email ThisBlogThis!Share to TwitterShare to FacebookShare to Pinterest
Labels: Environment

The walk home from the parking lot.

We park our car in a lot nestled next to the abutment of the Brooklyn Bridge. Yesterday I took a few pictures walking home from the lot, going a slightly roundabout way via Old Fulton Street and the Brooklyn Heights Promenade. 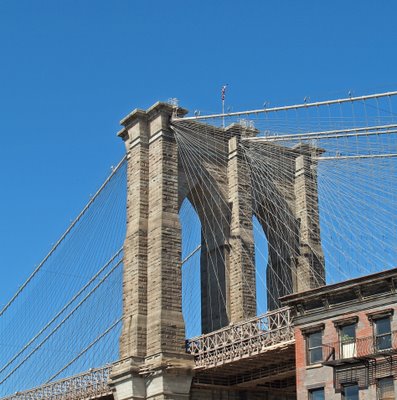 Great God, the only bridge of power, life and joy, the bridge that was a span, a cry, an ecstasy - that was America.

- Thomas Wolfe, Of Time and the River.

(Quote courtesy of Stephenie Hollyman's magnificent blog, Crossing Media. Groucho Marx observed of Lydia, the tattooed lady, You can loin a lot from Lydia. Just so, I think I'll probably learn much from Stephenie's blog. God bless the electronic frontier.) 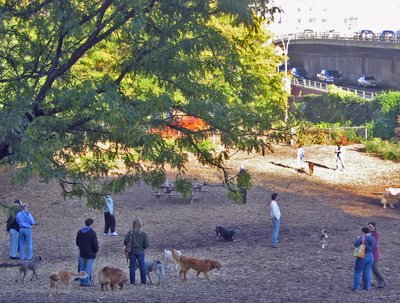 A rare urban free range for canines. The cantilevered Brooklyn-Queens Expressway is in the background. 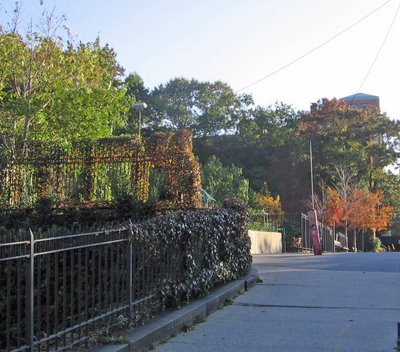 It comes here late, and without the spectacle of New England or Upstate. Still, it has a subtle beauty, as seen in this view along Columbia Heights, looking toward the Harry Chapin Playground. 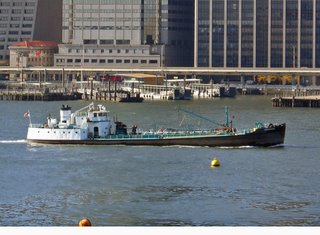 Small tankers like this are common in New York Harbor, mostly carrying bunker fuel to ocean-going ships docked here. One of them, the Q Boys, was featured in the original version of Madonna's "True Blue" video (impossible to find on line now, as it's been completely supplanted by a later version). This one was headed up the East River fully loaded, probably delivering fuel from New Jersey to a ship docked somewhere upriver or on Long Island Sound, or perhaps carrying heating oil to a supplier in that direction.
Posted by Claude Scales at 10:53 PM 1 comment:

How baseball history was made on my street.

Brooklyn Heights Blog ran a piece a few days ago on Jackie Robinson's signing with the Brooklyn Dodgers in 1945 at what was then Dodger headquarters, 215 Montague Street (four blocks from where I live).

I was amused by the look on Branch Rickey's face in the photograph, but then read in this bio that The Mahatma, like Tony LaRussa, was a law school grad. He's obviously taking the opportunity to give Mr. Robinson a bit of free legal advice.
Posted by Claude Scales at 12:09 AM 1 comment: