The Yale of the Beauforts demonstrates Google's continued superiority to Bing 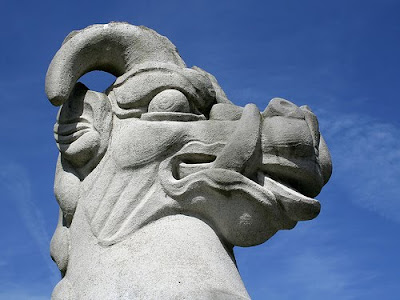 Your correspondent is in Tampa for a week that commenced with his 45th year high school reunion (coincident with a ceremony marking the 50th anniversary of his now truly grand old school) and will conclude with the celebration tomorrow of his mother's 93rd birthday.

This morning (conveniently now switching to the first person) I was sitting with my mother, going through her collection of memorabilia that includes extensive documentation of our time (1951-54) in England, where my father was on assignment with the U.S. Air Force. We were there during the coronation of Elizabeth II, and one of the items I found was a pamphlet titled "Westminster Abbey in its Coronation Setting". The text of the pamphlet begins:


Approaching the west end of the Abbey from Dean's Yard, the visitor comes first to the west side of the Annexe, which is composed almost wholly of glass. On this are engraved panels showing the Royal Badges--the Rose, the Thistle, the Leek and the Shamrock. Below, at eye level, are The Queen's Beasts, which were specially modelled by Mr. James Woodford, R.A., on the lines of the King's Beasts carved for King Henry VIII at Hampton Court. The Beasts and the arms they carry exemplify the descent of Her Majesty Queen Elizabeth II. The Queen's Beasts in the order they are approched from Dean's Yard are as follows:

1. The Falcon of the Plantagenets
2. The Bull of Clarence
3. The Griffin of Edward III
4. The Unicorn of Scotland
5. The White Lion of the Mortimers
6. The White Horse of Hanover
7. The Dragon of the Tudors
8. The Yale of the Beauforts
9. The Greyhound of the Tudors
10. The Lion of England


This raised two questions in my mind. One was, "Why did the Tudors rate two beasts?" The second, and more immediately compelling, was, "What the heck is a yale?"

Since Mom's computer has MSN as its homepage, I was prompted to try Bing for my web search, "Yale of the Beauforts". Bing drew blank, suggesting several unhelpful alternatives including "Beaufort Sea" and "Beaufort, S.C." (which, incidentally, are pronounced differently). So, I turned to old, reliable Google, which directed me to M Kuhn's Flickr photo that appears at the top of this post, and which is accompanied by the following text:


The yale was a mythical beast, said to be white in colour and covered with gold spots. It's [sic] peculiar characteristic was that it could swivel each of its horns independently. It de[s]cends to the Queen through Henry VII, who inherited it from his mother, Lady Margaret Beaufort. The shield shows a portcullis surmounted by the arched royal crown. The portcullis (uncrowned) was a Beaufort badge, but was used both crowned and uncrowned by Henry VII.


Now I know of another member of the mythical bestiary, as well as to continue to rely on Google.

Update:  artandsoul answers my first question (which I never attempted to do):

I think the tenuousness of his right to the throne spurred Henry VII to acquire TWO beasts to pull the carriage of his [Tudor] name.

One mythical and one natural, no less.
Posted by Claude Scales at 3:25 PM 3 comments: