Al Jarreau, whose syncretic style bridged jazz, mainstream pop, and rhythm 'n' blues, died today at 76. In the clip below, he does a vocal cover of Dave Brubeck's "Take Five", in which he demonstrates skill at scat singing, which I once was bold (or crazy) enough to compare to abstract expressionism. 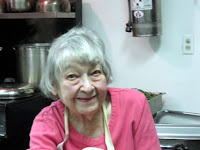 Back in January I posted my "Look Back" at 2016. I noted that past New Year's posts had included remembrances of those friends and significant people in my life who had died during the previous year, and promised that I would post my remembrances for 2016 soon. It's now almost mid-February, and I'm getting around to it

I also noted that 2016 had taken a heavy toll, both of those close to me and those who had served as cultural icons. I'll start with four lovely women whose friendship graced my life.

Dorothy Pilch (photo, by Martha Foley) was the senior parishioner of Grace Church, and a steadfast member, along with my wife, of the church's cooking crew. With a degree from Rutgers in economics and a background in banking, she devoted many hours of her later years to helping fellow seniors with financial advice. She frequently joined us for Sunday dinner. Her birthday was two days before mine, so for some years Steve Muncie, former Rector of Grace, would host her (and me incidentally) for a celebratory dinner at the Heights Cafe.

Martha and I had the misfortune of losing our next door neighbors on both sides early this year. Dorothy Azouni and her husband, Adel, greeted me when I moved into my apartment in 1983. She was a Brooklyn native, and Jewish; he was a Palestinian Arab. They met in Paris in the time shortly after World War Two, when she was working for a United Nations agency providing relief to people in war-ravaged Europe. She and Adel were together many years, until he died several years ago. Dorothy stayed in their apartment, visited regularly by members of a nearby synagogue who would bring her pastries and other baked goods that she insisted on sharing with us. She loved Liz and our cats.

The other neighbor we lost was Lillie DeBevoise. She moved in about ten years ago, and we immediately struck up a warm friendship. She was a retired teacher, widowed, with two grown daughters, a son, and several grandchildren, all of whom were regular guests at her apartment, as were Martha, Liz, and I. Lillie would often invite us, along with some other neighbors, for cocktails on a Friday evening. She was also my "date" for the New England Society's black tie fall dinner when Martha was out of town that evening one year. Her daughter Jane, also a widow, who lives a block away on Remsen Street, owns a lovely country house in the Catskills to which Lillie took us for a couple of delightful weekends. You can read about them here and here. During our second visit, Lillie introduced us to the Dai Bosatsu Zendo.

Another woman I miss is my Lion's Head companion of some years past, with whom I remained friends following the Head's sad demise, Alice Denham. A Jacksonville native, she was an early Playboy playmate, a founder of the National Organization of Women ("NOW"), and a published novelist. Photo and more about her here.

Henrik Krogius, who died in October, was a man of many talents and accomplishments: historian, journalist, photographer, and NBC news producer. I met him once, briefly, but for many years, until his retirement at the end of 2012 from the Brooklyn Eagle and its local Brooklyn Heights Press, for which I later became an occasional free-lance contributor, I was a regular and eager reader of his columns. From them, and from his books, I learned much about the rich history of our neighborhood.

Last year saw the passing of many musicians I admired. Ones I noted here are Natalie Cole (whose death on New Year's Eve wasn't reported until New Year's Day); David Bowie; Glenn Frey; Dan Hicks; Sir George Martin (although known as a producer, I'm sure he was also a musician; besides, I think being able to handle a mixing board is a kind of musicianship); Merle Haggard; Guy Clark; and Leonard Cohen. Others--Prince, George Michael, Leon Russell--I should have noted.

One death that hit me hard was that of Sharon Jones, a fellow Brooklynite whom I heard in performance at several venues. I first posted about her in 2010. She performed with Lou Reed in 2013, but was also diagnosed with cancer that year. She continued to preform whenever she could through her courses of chemotherapy, but finally succumbed in November. A brave and very talented woman.

A non-musician I mourned is Bob Elliott, of the radio comedy team Bob and Ray. Another was physicist Tom Kibble, whose work laid the foundation for some important discoveries, including the Higgs Boson.