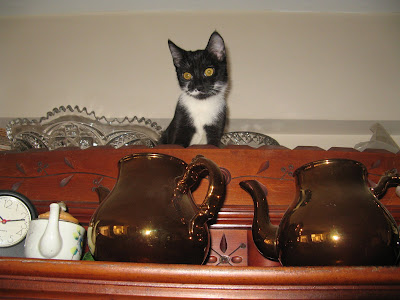 Something in her little feline brain encodes a military maxim: Take the high ground.
Posted by Claude Scales at 1:14 PM 1 comment:

Aboard Amtrak's Adirondack, with an R&B soundtrack.

Riding south from Plattsburgh to New York City on Amtrak's Adirondack last Sunday, I was in the rear coach, and noticed a couple standing at the back end of the car. He was using his camera to take a video through the rear window as the train rolled along. I was inspired to do the same, and shot this just south of Westport, New York.

As I was shooting, my iPod played Arthur Alexander's "You Better Move On", which, given that the train had left Plattsburgh about half an hour late, seemed appropriate.


As we continued southward along the shore of Lake Champlain, I heard this rare Dolly Lyon gem from 1957:

The song's steady rhythm melded well with the tempo of the train's motion, and Ms. Lyon's rich alto voice complemented the Champlain scenery. Thanks to northern soul stalwart cadlagh1 for the clip.

When we stopped at Whitehall, New York, improbable birthplace of the U.S. Navy (my wife, a Massachusetts native, strongly disputes this claim), I decided to shoot another video from the rear window as we departed the station and proceeded through the town.

As we continued southward toward Fort Edward, the iPod carried me back to my law school days with Robert Knight's "Everlasting Love":

A tip of the hat to davepinch1 for the video. South of Fort Edward, we picked up speed as we traversed the flat woodland between the Hudson River and Saratoga Springs. Looking out the window next to my seat, I saw the sky turning magenta. I aimed my camera through the window, but shortly after I pushed the button we passed a stick of freight cars, parked on a siding, that obscured the view. Once past the cars, the sky reappeared, with trees flashing by.

While the train was stopped at the Saratoga station, the iPod played "You Can't Sit Down", a 1963 hit by the Dovells, here capably covered by The Look in a 1982 MTV video posted on YouTube by that group's Dave Edwards:

The Amtrak crew was successful in making up lost time, so we arrived in Albany slightly ahead of schedule, and had almost forty minutes wait time at the Albany/Rensselaer Station. I decided to stretch my legs on the platform; while there, I saw Amtrak train 291, the northbound Ethan Allen Express, on its way from Washington, D.C. to Rutland, Vermont, arriving on schedule at 5:50 P.M.

These fireworks are from New Year's 2007, taken from the roof of my building.

Sampling the Saranac "beers of winter".

Continuing a tradition I began this time last year with the Sam Adams Brewmaster's Collection, this year I got the Saranac "Twelve Beers of Winter", a case of two bottles each of six brews thought appropriate to the season. The Saranac range of beers and ales is made by the Matt Brewing Company of Utica, New York. Matt operates what is now the oldest contrinuously used brewery in New York State. I first became familiar with Matt's products back in the 1970s, when I began to frequent the Lion's Head, where the staple draft beer at the time was Utica Club. Some years ago, Matt retired "UC", a typical but well-made mass-market lager, as its flagship brand, and turned to craft brewing. For a time, they made "local" craft brews (including my home favorite, Brooklyn Lager, until Brooklyn Brewery had its own plant) under contract. (Update/correction: I checked the labels on some Brooklyn Brewery bottles this evening, and found they still bear the message, "Brooklyn Brewery, Utica, NY." This means they're still being made at Matt's brewery. Perhaps it's only the kegs of draft that are being made here in Brooklyn.) They later adopted the name "Saranac" (after a lake in the High Peaks region of the Adirondack Mountains, just over 100 miles northeast of Utica) for their own line of premium brews.

Bohemian Pilsner. The Pilsner style is popular in this country because it is light, crisp, and takes well to refrigeration. Saranac's version is close to my Platonic ideal of Pilsner: definite, but not overpowering, barley toastiness balanced by tart, slightly astringent, but not too bitter, hops. It proved a good companion to pizza.

Belgian Ale. I've not been a great fan of Belgian ales, perhaps because, as an oenophile, I prefer fruit in vinous form (though I have a weakness for Berliner weisse mit schuss; a pale, almost sparkling wine-like wheat beer with a dollop of raspberry syrup). This low country-style charmer, though, won me over by having a tart, cinnamon-y opening that brought to mind my wife's excellent apple pie, and a subtle malty finish. It stood up well to Newman's Own hot chunky salsa on white corn chips.

Extra Special Bitter ("ESB"). Evidently, the makers of Fuller's ESB haven't trademarked the initials, which stand for "Extra Strong Bitter" or "Extra Special Bitter", depending on which side of the Atlantic you're on. In any event, "ESB" is prominent on the wrapper over the neck of this ale's bottle. Saranac's version isn't as complex or interesting as its British cousin, but still a well-balanced and satisfying ale.

India Brown Ale. I have a weakness for India pale ales, or IPAs, which began for me years ago with the version, sadly no longer made, by Ballantine. I like IPA's robust hoppiness--its name, as I recall, came from its being made to withstand a long, hot sea voyage to India; the hops, I suppose, acting as a preservative. Saranac's "India Brown", as the name implies, is darker in color than IPA, being brewed with malts that are, according to the Saranac website, "decoction mashed to highlight their character...". The result is a rather busy brew, with tart hops and savory malt both performing their virtuoso acts on the tongue. Not at all unpleasant, but I still prefer IPA.

Vanilla Stout. I was prepared to be mildly disappointed by this, as I was by last year's dark-brew-plus-confection, the Sam Adams Honey Porter. To begin, "stout" to me means Guinness; all others so far have been mere pretenders. Then there's my prejudice against added flavorings, even "natural" ones. My first taste confirmed that this is not Guinness; the hops are much more assertive and the malt heavier, less mocha-y. My first thought was, "Where's the vanilla in all this?" Then, after a swallow and a breath intake, it showed itself, coyly and not cloyingly. It's subtle, and it works. The website suggests having it with dark chocolate or fruit desserts. As luck would have it, on the same shopping expedition that yielded the Saranac I also scored a Terry's dark chocolate orange. Seemed like a way to kill two birds with one stone. Tried it; didn't get a trip to Nirvana, but it was pleasant.

Season's Best. This year's model of Saranac's annual special holiday brew is described as a "Vienna-style lager." I've never been to Vienna, but if this is typical of their beer, it may be worth a visit (that, and the opportunity to walk the same streets as Mozart, Beethoven, Freud, and Wittgenstein). Hops open strong here, but malt asserts itself at the finish. In between, there's a delightful frissance. Goes well with the chocolate orange, too.
Posted by Claude Scales at 10:08 PM 2 comments: