Going through today's New York Times, I saw two items that led to the caption of this post. The first takes us, once again, to the Texas legislature. Lest it appear that I'm being unduly harsh to the Lone Star State, though, please note that the mischief here originated in the state of Georgia, with an organization called The Fair Education Foundation, Inc. (see here). What FEF is about is trying to get evolution banned from classrooms because it is based on religion; therefore, teaching it violates the constitutional separation of church and state. Others have made similar arguments, claiming that "scientism", "evolutionism" or "Darwinism" constitutes a "religion" because it rests upon unproven dogma that can only be affirmed through an act of faith. FEF, however, argues that the religious foundations of evolution are in the Jewish mystical tradition of Kabbalah. FEF doesn't cite any Kabbalistic underpinnings for Darwinian natural selection beyond the fact that rabbinical "sages" who contributed to the Kabbalah tradition, in their exegeses of Torah texts, made calculations of the time elapsed since the beginning of creation that anticipated, and are in striking accord with, estimates by modern cosmologists of time elapsed since the "big bang". By positing that the universe has been around for billions of years, instead of the mere six thousand it is constrained to by the exegesis of Genesis that FEF prefers, the Kabbalists and their cosmologist heirs allow sufficient time for evolution to have produced the flora and fauna we have today. Unstated in this argument, but hinted at because he is mentioned in the FEF text, is that Arno Penzias, a co-discoverer, along with his co-worker Robert Wilson, with whom he shared a Nobel Prize, of the cosmic background microwave radiation that evidences the big bang, is an observant Jew.

Incidentally, FEF doesn't stop at seeking to bar the teaching of evolution. They also want to throw out Copernicus. One thing you can say for them is that they have no use for dispensational millenialism, or, if you prefer, pre-millenialism (see here), so they give the back of the hand to Tim LaHaye fans. Unfortunately, they also are Holocaust deniers. Update: when I posted this nine years ago I had links to pages of the FEF website citing Kabbalah and denying Copernicus and the Holocaust. I see now that those pages are no longer accessible, although the one about pre-millenialism is still there.

Anyway, Ben Bridges, a member of the Georgia legislature, produced a one page memorandum summarizing FEF's constitutional argument against the teaching of evolution and distributed it to his colleagues. He also sent a copy to Warren Chisum, the second most powerful member of the Texas House of Representatives, who had it copied and distributed to his fellow legislators. When some of them complained about its substance, Mr. Chisum distanced himself from it, saying that the memo "does not reflect my opinion", and also that he regretted having "hurt or offended some groups including some of my dear friends." He also retained a former legislative colleague, Steven Wolens, who is Jewish, to help with damage control.

Making fun of FEF and its ilk has a fish-in-a-barrel quality (though it's sometimes irresistable), and it's hard to give any credence to the notion that such groups pose any serious threat, especially when we consider recent developments in Kansas. However, the other item that got my attention this morning is, I think, a real and insidious threat, having been endorsed by perhaps the pre-eminent figure in American pop culture. It's described in Maureen Dowd's column, which has the irresistable title, "A Giant Doom Magnet".

The column is about Oprah's latest fave rave: an Australian TV producer named Rhonda Byrne's book, The Secret. If you guessed (you being part of that infinitesimal minority of people who don't watch Oprah) that this is a text that gives you a simple principle by virtue of which you can transform your presently dreary life for the better, bingo. All one need do, saith Ms. Byrne, is to think positive thoughts, and good things will follow. If you're sufficiently into geezerdom, like me, this may strike a mystic chord of memory reaching back to a 1952 opus by The Reverend Norman Vincent Peale, as Dowd notes. If you're a student of modern European intellectual history, it may remind you of this worthy thinker.

According to Ms. Byrne, the converse also holds: negative thoughts beget negative results. Ms. Dowd's title for her column refelects her realization that her negative thoughts about the Bush administration's actions in Iraq serve to amplify the negativity of those actions.

According to Ms. Byrne's acolyte James Arthur Ray, interviewed by Oprah, this is all "very, very scientific." So was phrenology considered, in its time.

"Um, Claude," I can almost hear you, my faithful reader, saying, "what about that 'snark-free' guarantee you proffered in your last post?" What can I say? So sue me.

Addendum: I hate to take issue with a friend, but Rundeep's comment on this post compels me to say this: I love Texas. Yes, I love it in spite of its perhaps greater than average quotient of jingoistic and ultra-fundamentalist nutjobs. I love it for the likes of Ann Richards (see here), Barbara Jordan, and Molly Ivins (see here), as well as for having gotten drunk a few times with Kinky Friedman (see here) (who could sometimes be an asshole, but was always interesting) and Jim Hightower (see here) (who was always a gentleman, but never dull), and for having (at a fundraiser for Jim at the old Lone Star Cafe on 5th Avenue, when he was running for Chair of the Texas Railroad Commission) danced the "Cotton-Eyed Joe" with Cissy Farenthold (see here) and twenty or so other of her nearest and dearest friends. I love it for Terry Allen, Archie Bell and the Drells, Asleep at the Wheel, the Austin Lounge Lizards, the Big Bopper, Guy Clark, Alvin Crow and the Pleasant Valley Boys, Arthur "Big Boy" Crudup, Freddy Fender, Nanci Griffith, Carolyn Hester, Adolph Hofner, Buddy Holly, Lightnin' Hopkins, Flaco Jimenez, Janis Joplin, the Light Crust Doughboys (especially John "Knocky" Parker), Augie Meyer, Mouse and the Traps, Doug Sahm, Joe Tex, the Thirteenth Floor Elevators, Townes Van Zandt, Willie and Waylon and Jerry Jeff, and Bob Wills. I love it for Larry McMurtry. I love it for having spent a couple of formative years in San Antonio when my dad was stationed there in the Air Force, where my Pennsylvania bred mom learned to buy fresh tamales, wrapped in cornhusks, and serve them to us for dinner once a week, and where my fourth birthday present was a Billy the Kid outfit from Joske's.
Posted by Claude Scales at 6:45 PM 6 comments:

Addendum: Mickey Kaus has a different take (scroll down to February 15): bloggers are too "elite".

Is anyone up to taking Kaus's Dinesh d'Souza challenge?

Another hat tip to the right: Nice piece here by Jonah Goldberg.

And another: Amity Shlaes (again in yesterday's Sun) has good things to say about "new Democrats".

We are being engulfed in a veritable tsunami of civility.

Caveat: In response to Keifus, I must point out that my "snark-free" guarantee does not extend to comments others may post hereon.
Posted by Claude Scales at 10:19 AM 2 comments: 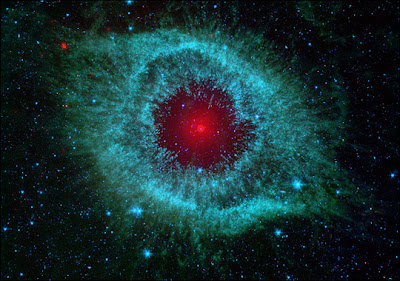 This is the Helix Nebula, in Aquarius, photographed by NASA's Spitzer Space Telescope (named for the late astrophysicist Lyman Spitzer, Jr. - see here - not for New York's new governor). The Helix is the visible evidence (though this image was made at x-ray frequency) of the death throes of a star similar to, but about three times larger than, our sun.

The image was downloaded from Discovery News.
Posted by Claude Scales at 8:06 PM 5 comments:

I have blogger's block.

I'll get over it. Two recent deaths, one of them the subject of the post immediately below, and other matters, have put me in an introspective, not-very-communicative mood for the present. There are many things I want to write about, including my long-threatened contribution to the "just society" discussion begun by El Cabrero and taken up by Hipparchia, and my promised attempt at midrash on Keifus' piece concerning nostalgia (see here).

For now, I'll leave you with this image of yet another sunset seen from the Brooklyn Heights Promenade. 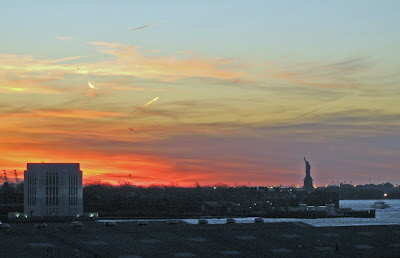