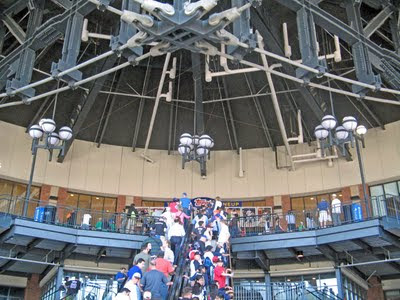 Yesterday, with some trepidation, I went with a friend to see the Mets' final game of their four-game series with the Pirates. Trepidation, because I have come to believe that my presence in the stands jinxes the team. The Mets need luck now. They had just lost their last two games after taking an early lead and then collapsing in the late innings. Seen above is the rotunda at the entrance to Citi Field. 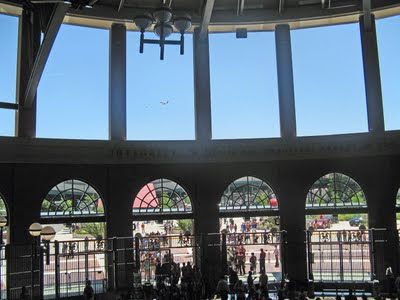 Here is the view looking back from the escalator. Note the English sunrises. 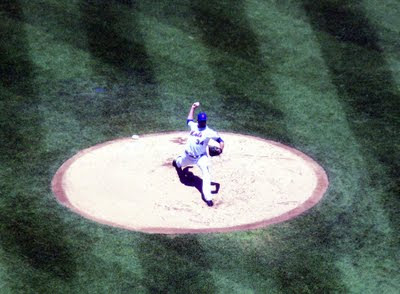 Mike Pelfrey, the Mets' starter, warms up. After a good season in 2010, Pelfrey is off to a rocky start, with a 3-3 record and four no decisions, and a 5.56 ERA, including yesterday's game. My jinx fears seemed justified as Pelfrey yielded seven earned runs through the top of the third inning. Perhaps, I was thinking, he needs to re-acquaint himself with Mies van der Rohe. My friend joked that the Mets were trying a new strategy: let the other team get ahead first. His humor proved prophetic, as the Mets' batters came alive in the bottom of the third, scoring three runs. 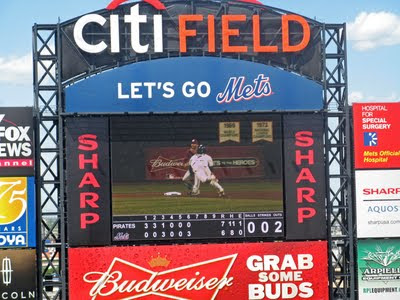 Pelfrey settled down to pitch a scoreless fourth and fifth, though with some excitement along the way. In the bottom of the fifth, he was pulled for a pinch hitter. Things got very exciting in the sixth, as the Mets scored four more times (the scoreboard photo above was taken before the fourth run came in) to tie the game. 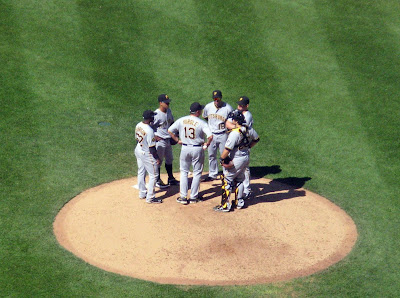 Now it was the Pirates' turn to worry. Their starter, Paul Maholm, was pulled during the sixth. The Mets were then able to take advantage of the Pirates' bullpen, scoring again twice in the eighth to go ahead. The Mets bullpen held fast through the sixth, seventh, and eighth. 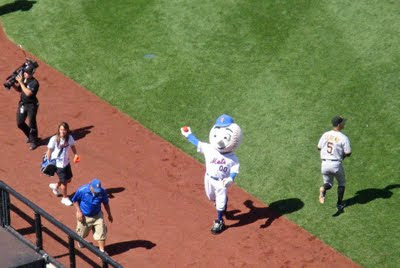 As the Mets rallied, Mr. Met cavorted for the crowd. Francisco Rodriguez, the Mets' closer, came in at the top of the ninth and promptly allowed a leadoff single, which later became a run. He then settled down and got his sixteenth save of the season. My friend said, "He usually gets the job done, but seldom without drama." Sounds like the job description for a Mets closer.

Update: unfortunately, the Mets returned to form last night, taking a 3-1 lead into the eighth then losing to the Braves 6-3.
Posted by Claude Scales at 2:17 PM No comments:

While he suggests no historical connection between the events in Charleston, South Carolina on May 1, 1865 and later Memorial Day (or Decoration Day) celebrations that came to be established at the end of May, David W. Blight's op-ed piece in today's New York Times tells a compelling story and provides the basis for an argument that the concept of Memorial Day originated with African-American recently freed slaves.

This item also appeared in today's Times. Mr. Wiedorfer's explanation of his action is characteristic of the heroic: “Something had to be done and someone had to do it. And I just did it. I can’t tell you why.”
Posted by Claude Scales at 6:51 PM No comments: