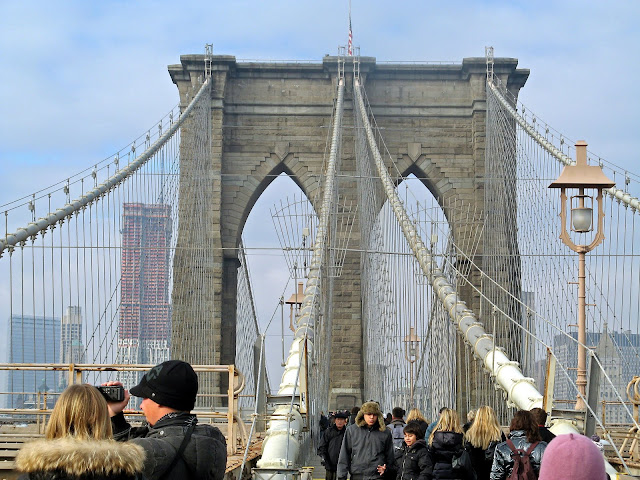 I've made it my practice, on New Year's Day, to thank my readers, and to recognize those who have given this blog help and support during the previous year. As always, my biggest source of new readers has been Brooklyn Heights Blog, now part of the Brooklyn Bugle empire. So, once again, my hat's off to Homer Fink and the rest of my BHB colleagues. Other blogs that have been helpful sources of traffic are Age of Reason, artandsoul, Bed-Stuy Blog, Growing Tomatoes from Seed, Instaputz, Forgotten NY, Fucked in Park Slope, Luna Park Gazette, newyorkshitty, Notes from a Transitional Fossil, Nurse Ratched's Place, Only the Blog Knows Brooklyn, Rumproast, This Page Intentionally Left Blank, and tugster: a waterblog, so thanks, respectively, to Thomas Paine; Cindy Jacobs; The Changeling; Switters; ts; Kevin Walsh; Erica; Rob Lenihan; Miss Heather; Archaeopteryx; Mother Jones, RN; Louise Crawford; Kevin K; Twif; and Will Van Dorp. Other loyal readers and commenters include Tom and Polly Beason, Brooklyn Beat, Ted Burke, catnapping, Melanie Hope Greenberg, Susan Houx, Isonomist, Keifus, The Lone Beader, Joe Louzonis, Joe Martini, Maria McGarry, Marian Saska, Schadenfreude, Michael Simmons, Sometimes Saintly Nick, Mike and Bonnie Starling, Lisa Swan, and Allan and Marcia Tremmel. If I've overlooked you, please let me know and I will add you to the roll.

This year I'm giving a special "thank you" to Daniel Machalaba for spotting my post about the Amtrak Adirondack and quoting me in his Wall Street Journal article about baby boomers discovering rail travel, and to WSJ multimedia producer Beckey Bright for making the video that accompanies the on-line version of Dan's article.

"Amtrak Adirondack" (or variants thereof) continues to be one of the most popular web searches to lead to hits on my blog, along with Eisenhower Lock. This year, Fred Exley has also drawn many visits. Probably the biggest attraction in 2009, however, was my post about the Pierre Bonnard exhibit at the Met. A tip of the hat goes to Mark Crawford for sparking my interest in Bonnard. Another popular destination has been my post on jazz and the visual arts, which was inspired by Mike Sorgatz.

To all of you: my fondest wishes for a happy and prosperous new year.
Posted by Claude Scales at 12:02 AM 6 comments: 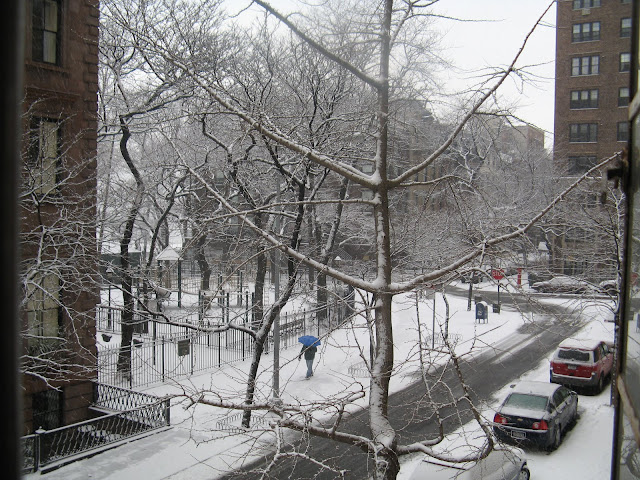 Here's the view from my window this morning, looking across Pierrepont Place toward Pierrepont Playground and Columbia Heights beyond.

The playground occupies the site on which formerly stood the Henry Pierrepont mansion, the rear of which is seen in the center of the turn-of-the 19th to 20th century photo at left. (The photo comes from this Brooklyn Heights Blog post.) The Pierrepont mansion was designed by Frederick A. Peterson, a German-born architect perhaps best known for the Cooper Union building in Manhattan. The mansion was demolished in 1946.

The building the edge of which is seen at the left of my photo at top, the rear of which can be seen toward the right in the old photo, is the Abiel Abbott Low mansion, designed by Richard Upjohn and completed in 1857. To its south (part of the rear visible at the right of the old photo) is its near mirror-image twin, also by Upjohn, the Alexander M. White mansion. Low and White were prominent merchants, Low in the China trade and White in furs. Low was the father of Seth Low who, at various times, served as Mayor of the City of Brooklyn, President of Columbia University, and Mayor of New York City.
Posted by Claude Scales at 8:39 PM 2 comments: