"I Dreamed I Saw Joe Hill" - a song for Labor Day 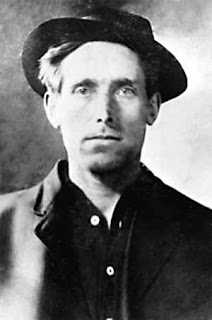 Joe Hill was a songwriter and labor organizer. He was born Joel Hägglund in Gävle, Sweden in 1879. After a childhood made difficult by the death of his father from an occupational accident and later of his mother from complications following back surgery, he emigrated to the United States in 1902. He had almost no formal education, having been forced to work after his father's death, when Joel was nine.

After arriving in America, he worked various jobs and adopted the name Joe Hill. He was fired from a job in Chicago for trying to organize a union. Afterwards, he hit the road, getting involved in labor organizing in California, where he joined the International Workers of the World (the "IWW" or the "Wobblies"). This led to his spending some jail time in San Pedro where, he said, "I was a little too active to suit the chief of the burg." In 1911 he was also involved in an abortive attempt to start a revolution against the government of the Mexican dictator Porfirio Diaz. During his time on the West Coast he wrote a number of songs that were later collected in the IWW's songbook.

In January of 1914 Joe Hill was in Salt Lake City, and asked a physician to treat a gunshot wound to his chest. That same night a grocer and his son had been killed, but the son got off a shot that hit one of their assailants. Hill was arrested and charged with the murders. He said he had been shot in a fight over a woman, but declined to identify her or the shooter. He was tried, convicted of murder, and executed by firing squad. This was despite pleas by President Wilson, the Swedish ambassador to the U.S., Helen Keller, and others for his sentence to be commuted. In recent years William M. Adler, in his biography of Hill, The Man Who Never Died, revealed an old letter from Hill's girlfriend, Hilda Erickson, in which she said Hill had been shot by the man she jilted to take up with Hill.

Ten years after Hill's execution, Alfred Hayes wrote a poem, "I Dreamed I Saw Joe Hill Last Night." Ten years after that, Earl Robinson set it to music, and it became an anthem of the labor movement. It's performed masterfully in the video below by the great Paul Robeson.

The photo of Joe Hill is in the public domain. Its source is identified by Wikimedia as the Utah Division of Archives and Records Service.

Posted by Claude Scales at 5:31 PM No comments: