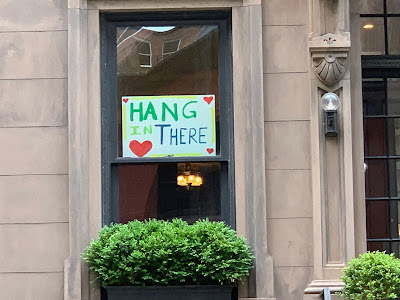 On New Year's day 1980, as I recall, someone observed, "Here's to the passing of a real kidney stone of a decade." The seventies had their ups and downs for me, but on balance more up than down. They began with my finishing law school and getting a job in New York. After a year I had to leave temporarily to do two years' Army Reserve active duty. When I returned, I settled into a Greenwich Village that was still an affordable neighborhood for artistic and journalistic sorts, and had bars like the Bells of Hell and the Lion's Head where I could enjoy their company. I had a brief marriage that didn't end traumatically; Joanna and I remained friends until her untimely death in 1993.

I found that the temptations of the Village demimonde didn't mix well with being an associate at what was becoming a high powered corporate law firm, so I left and took an in-house job with a corporate client. When I found even that more than I wanted to handle at the time, I decided to go back to school. My work in regulatory law had sparked an interest in economics, and New York University offered an MBA program with an econ major. With the GI Bill, indulgent parents, and the availability of part-time work, I was able to enjoy a slightly before mid life sabbatical from the demands of full time law practice. I ended the seventies as I had begun them, as a student. They also saw my brief moment of glory as a movie actor, thanks to my friend Charlie McCrann, who would later die in the World Trade Center. There's more about my late seventies adventures here.

Like the seventies, 2020 started for me on a comfortable note. I was still working; my profligacy in my younger days had assured that retirement would be a distant goal. Martha, my wife of over 28 years, was working on interesting projects for clients concerning their archives and genealogy. When COVID-19 hit, I was able to transition to working at home. Martha had already been doing most of her work on her computer here, with occasional visits to her clients to examine archival material. The COVID restrictions had no impact on our ability to continue our gainful employment.

It did affect our social life, though not in a completely devastating way. About a month after the restrictions were imposed, our favorite place to sit at the bar, have a light supper with cocktails or wine, and socialize with friends or with strangers we met there, along with the bartenders and floor staff, and with Tim, the genial owner who would sometimes join us at the bar, Jack the Horse Tavern (Tim named it for a lake in his native Minnesota), closed permanently. Other places around us managed to keep going, and in good weather we could meet friends for drinks and snacks at outdoor tables, dine on take out, or dine indoors while it was allowed, with strict occupancy limits and spacing. Now that indoor restaurant dining is banned and winter weather is putting a severe crimp on outdoor dining, despite the gas heaters and overhead canopies many restaurants have provided, we fear for the survival of our other neighborhood haunts.

We live in a large building, and have several close friends in the building with whom we've been able to socialize in very small gatherings. We've had Zoom sessions with our more far flung friends and relatives. Our daughter, Liz, and her boyfriend came up from Philadelphia for two days during the week before Thanksgiving. We shared our Thanksgiving meal with one friend, and had Christmas dinner by ourselves.

As I noted here previously, the COVID restrictions imposed in March initially made us give up in person church services. These were replaced by Zoom and live streamed ones. When the infection numbers declined, unfortunately after Easter, we went back to in person services, but with attendance limited - reservations required - and strict social distancing. When infection rates went up, just before the Christmas season, we were required to go back to Zoom and live streaming.

The "New Normal" has, for Martha and me, so far been tolerable, though its long term effects may be less so. We support the requirements intended to limit the spread of the pandemic, such as mask wearing and social distancing. I know that COVID-19 has been disastrous for many other less fortunate people, often fatally. It has also intensified, or at least made more evident, a rift in our social and political fabric. I hope to do whatever I can, in my small way, to mend that rift. I know that those on my side of the rift - one of the few things I celebrate about 2020 is the outcome of the presidential election - have no monopoly on virtue.

It's been my custom, sometime in January, to look back on the previous year and note those among my friends, relatives, and heroes who have died, along with those who have been helpful to my writing venture or inspirational in a broader sense. I will continue that custom this coming month. As for now, goodbye 2020. Don't let the door hit your backside on the way out.