Nostalgic about the '70s? This National Airlines ad may cure it...

...or, it may not. You'd have to be well over thirty to remember National Airlines (not to be confused with a cargo and charter carrier based in Ypsilanti, Michigan), which was founded in 1934 and merged into Pan American World Airways in 1980. Pan Am went into bankruptcy and ceased operating in 1991. In its heyday, National was strong on two routes: the East Coast route from the Northeast to Florida, and the Southern Tier transcontinental route connecting Florida, Texas, and California.
The ad shown in the clip at the top, which aired on TV in the early 1970s, continued a tradition of sexual innuendo that began in the '60s and culminated in the 1970s with the "fly me" (perhaps riffing on the old "Coffee, tea, or me?" gag) campaign, during which National painted women's names on its planes (see "Elaine" in photo above), and also aired ads like this:


As this Time article reported, some flight attendants (then commonly called "stewardesses"--male attendants were rare in those days) objected to this campaign; in particular, to the company's requirement that they wear "fly me" buttons on their uniforms. The article quotes National's PR director: "We had no preconceived idea of injecting a suggestive leer into the campaign." Um-hmmm.

According to one of the comments on the "I'm Maggie, Fly Me" video, the campaign was the brainchild of Dick Wolf, who went on to create the TV series Law and Order.
Posted by Claude Scales at 12:58 AM No comments:


Margaret Whiting, who died Monday at the age of 86, was one of the great song stylists of her generation. The clip above is of her rendition, in a duet with Johnny Mercer, of the now timely classic "Baby it's Cold Outside" (thanks to moonbeam0013).
Posted by Claude Scales at 12:00 PM No comments:

Chilly scenes of winter in Brooklyn. 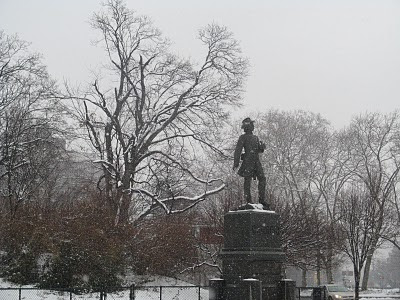 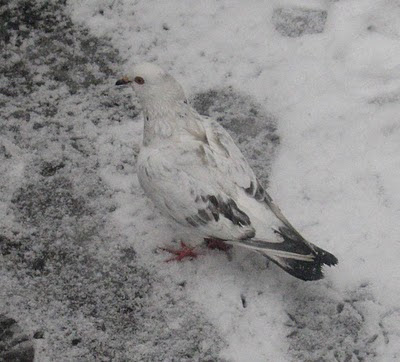 A white pigeon finds itself almost perfectly camouflaged on a Park Slope sidewalk. 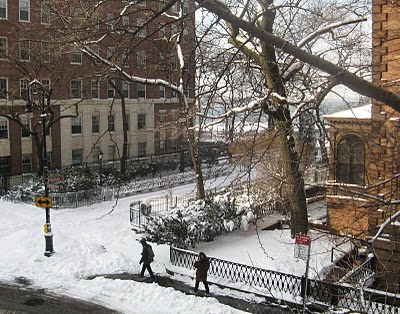 The view from my window this morning, after fresh snowfall overnight.

Chilly Scenes of Winter is the title of a 1970s Ann Beattie novel later adapted for the screen by Joan Micklin Silver as Head Over Heels, then remade by eliminating an unconvincing "happy ending" and re-released under the novel's title.
Posted by Claude Scales at 2:36 PM No comments: 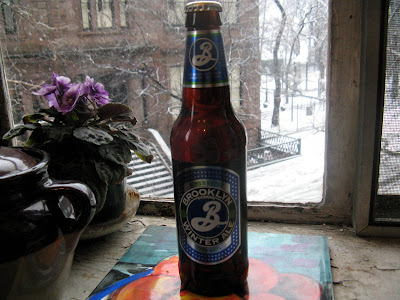 Yesterday evening, I tasted this offering from Brooklyn Brewery. My notes:

Head: full and creamy, but collapsed quickly (perhaps because of low ambient humidity).

All in all, a most satisfying brew for a winter's night. I had a different reaction when I tasted this in May: see my tasting notes here. In particular, this time I didn't notice the "slippery, glycerin-y" quality that I did in the earlier tasting. I wonder if the formula has been changed for this winter's offering, if my palate has changed, or if it just makes a difference whether you taste this on a warm night in May or a cold one in January.
Posted by Claude Scales at 1:13 PM No comments:

The Jets do not let me down.

Jets 17, Colts 16! Gang Green pulled it off on a final seconds field goal following a perfectly executed sideline pass. Sometimes the upsets I want do happen. Next week, I can test that theory when the Jets face the Pats, who they defeated early in the season, and were trounced by toward the end.

If Namath is "Broadway Joe", should we now start calling Sanchez  "Park Avenue Mark"?
Posted by Claude Scales at 6:48 PM No comments: