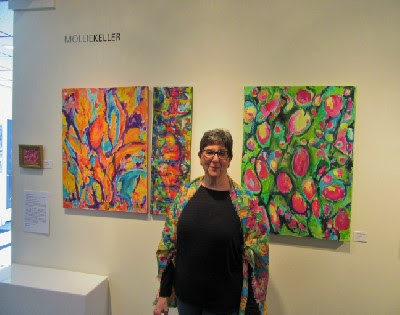 Mollie is a long time friend of my wife's and, more recently, of mine. The photo above shows her standing among an array of her more recent paintings, which are in a more abstract, floral-inspired style than her earlier ones. As she wrote in her artist's statement accompanying the exhibition:


In these pictures I have traced my personal relationship with flowers. I began as a careful observer, eager to catch every line and lilt of a petal so that the viewer would really see the bloom. I moved on to more painterly portraits in which I used watercolor to convey the interplay of form and light in a blossom. And now I am using oil to capture the sensations I feel when I contemplate the particular essence of each bud.

The paintings in the photo above are, from left to right: Blossom, Kaddish for Ruth, Vine, and Kaddish for Deni. 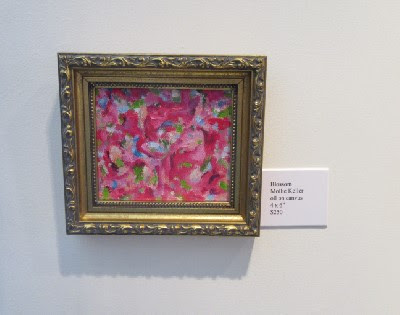 Here's a closer view of the small painting Blossom, showing the quality of Mollie's brushwork in oil. 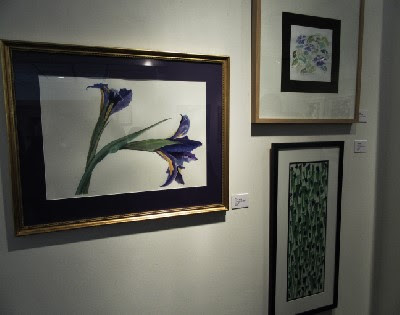 Here are some of Mollie's earlier works: from left, Iris, top right Nosegay, and bottom right Bluebells, all watercolor on paper. 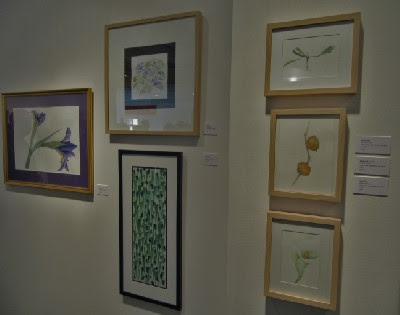 This shows the same three paintings, along with three other of Mollie's earlier works, top to bottom: Dandelion, Chinese Lanterns, and Calla Lily; all watercolor and pencil on paper. These are examples of her more "painterly portraits". 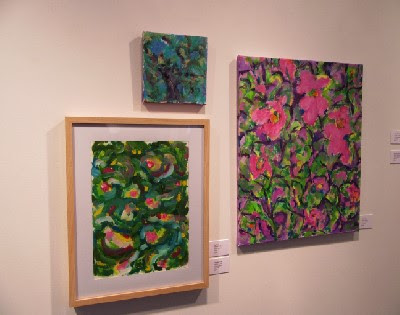 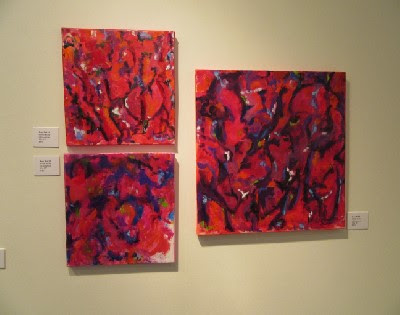 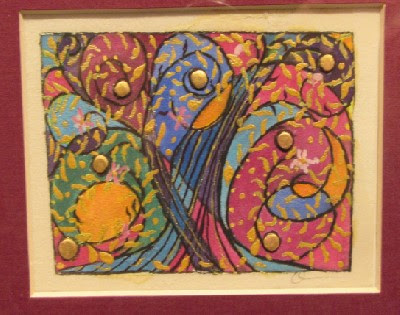 Here is Mollie's one non-(or post) floral entry in the show: the elegant miniature Golden Fruit (ink, gouache, and gold leaf, on parchment). 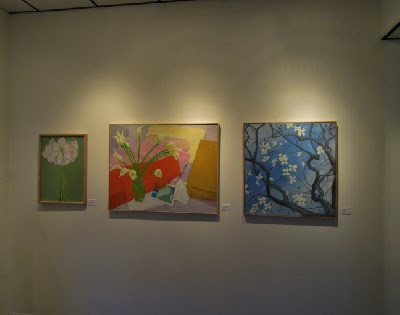 Suzaanne Andover Keany, whom I met for the first time at the exhibit, works in what, on the surface, seems a very naturalistic style. The paintings above are, from left to right: Amaryllis, Wish I Was There, and Before the Rain (all oil on canvas). Her artist's statement includes the following:


Painting is a surprising journey...All the literary meanings come into play. Flowers greet us and send us off. They mark our journey. They celebrate love and commemorate grief. They are everywhere for everyone.

Painting for me is a luxury, a dialogue with what is. 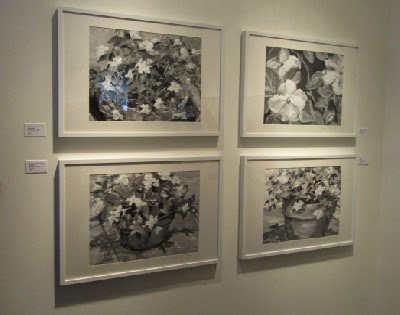 Here are four of her tempera on paper studies, Clockwise from bottom left: Blooming, Busy Lizzie, Close Up, and Spring. Here are two of Ms. Keany's oil on canvas paintings that include other than floral elements: Valentine (left), that has shells along with a long-stemmed rose, and For Georgia, an homage to Georgia O'Keefe, who incorporated cattle skulls and feathers as well as flowers in her works.

Floradora will remain open through Sunday, March 27, 2016. If you're in or near Fairfield, or can get there, I recommend it highly.
Posted by Claude Scales at 11:33 PM No comments: 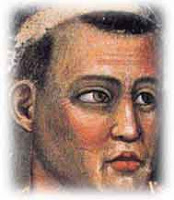 This year I volunteered, as I have done for some years, to participate in the Passion reading at the Palm Sunday service at Grace Church. Last year I was Narrator (effectively St. Mark, from whose gospel the reading was taken), which meant I had more lines than anyone else. This year the reading was taken from Luke, and I was given the role of Pontius Pilate.

"Not the most appealing of characters," I thought. At least I had more than one or two lines. This got me to thinking about the enigmatic character of Pilate. The image above, by Giotto de Bondone (1266-1337), shows him looking devious--note the averted eyes--but also weak, as indicated by his soft, fleshy features. No one who didn't see Pilate in the flesh knows what he looked like; there are no surviving portraits, drawings, or sculptures from life, if indeed any ever were made. Giotto's fresco comports with the accounts in the gospels, which describe Pilate as vacillating, initially appearing to sympathize with Jesus, although willing to have him flogged before releasing him, but later yielding to the demands of the crowd and ordering him crucified.

To most contemporary Christians that yielding and that order cements Pilate's characterization as a Very Bad Guy. I remembered, though, having read that Coptic Christians in Africa consider him a saint. The Biblical Archaeology Society gives an account of how this came to be. St. Augustine of Hippo, an African, believed Pilate to have been a convert to Christianity. Pilate's washing of his hands and declaring himself "innocent of this man's blood" (Matthew 27:24) is seen as a parallel to Jesus' sacrifice washing away the sins of humanity. Pilate's wife was also canonized in the African and Greek Orthodox churches on the basis of her message to Pilate, reported in Matthew 27:19, that he should not harm Jesus because "I have suffered a great deal because of a dream about him."

Some biblical scholars have argued that the quasi-sympathetic portrayal of Pilate in the gospels is a result of the gospel authors' seeking to shift the blame for Jesus' crucifixion from Roman authority to the Jews. This was because, at the time the gospels were written, Christianity, which initially had been a sect within Judaism, was beginning to separate itself from its Jewish origin and was seeking Roman approval, or at least a measure of tolerance. The starkest indication of this is in Matthew 27:24-25, where Pilate washes his hands, declares his innocence, and gets the response, "His blood is on us and on our children." For many centuries, it was Christian doctrine that the "us" in that statement meant all of the Jewish people, at least apart from the few who were Jesus' disciples or followers. This was the basis for many centuries' persecution of Jews in pogroms and ultimately in the Holocaust, although the latter also had non-religious origins. On October 28, 1965 Pope Paul VI promulgated Nostra aetate ("In Our Times"), a declaration of the Second Vatican Council that the Jewish people as a whole, including all Jews living since the time of Jesus, were innocent of Jesus' death.

The vilification of Pilate appears to have begun with the conversion of the Roman Empire to Christianity, and a concomitant desire to break with Rome's earlier paganism, to which Pilate bore allegiance. It has been years since I read (in translation) Dante's Inferno, and I was curious to recall where in the circles of hell the poet placed Pilate. As it turns out, Dante nowhere mentions Pilate by name in the Inferno, or anywhere else in the Divine Comedy except in Canto XX of Purgatorio, where Dante calls Phillip IV of France "the new Pilate" for his having delivered Pope Boniface VIII to his enemies. There is an ambiguous reference in Inferno Canto III, where Dante sees the vestibule of hell to which the uncommitted--those who did not choose between good and evil--are condemned. Here he sees "the shadow of that man who out of cowardice made the great refusal." Some readers have interpreted this to refer to Pilate, whose "great refusal" was not to defy the crowd's demands to crucify Jesus. Others think it refers to Pope Celestine V, whose abdication of the Papacy led to the accession of Boniface VIII (the same mentioned in Purgatorio XX), whose policies led to Dante's being exiled from his native Florence.

Consideration of Pilate's nature brought me to an uncomfortable realization. In an earlier post, I noted that the then Episcopal Bishop of Alabama had joined other prominent local Protestant, Catholic, and Jewish clergy in calling on Dr. Martin Luther King, then jailed in Birmingham, to call off the peaceful demonstrations against segregation and for civil rights that he led. Reading that letter, with its calls for moderation and patience, I realized that, had I been in the position of that bishop at that time, I would have been strongly tempted to sign the letter. While my heart was on the side of those demonstrating for justice, my inclination has always been to avoid confrontation where possible, and not to alienate those in power, in the hope that in time they can be persuaded to do the right thing. What would I have done had I been in Pilate's position? Could I have mustered the courage to defy the crowd? Can I find that courage now?