When I go for walks, I usually take my iPod set in the "shuffle" mode. Because of my eclectic interests in music, this sometimes leads to odd concatenations, as on a recent walk during which the Sinfonia from Verdi's Nabucco was followed immediately by the Holy Modal Rounders' version of "Flop-Eared Mule". Sometimes these conjunctions are serendipitously pleasant, as on one walk several years ago when the first, allegro movement from J.S. Bach's Second Brandenberg Concerto was followed by a lively Cajun song.

A few days ago I started out with the iPod playing Gram Parsons' haunting, autobiographical "In My Hour of Darkness," with Emmylou Harris and Linda Ronstadt on harmony vocals, from Gram's posthumously released album Grievous Angel (audio clip with still of album cover above); next came "My Dear Companion" from the Trio album by Dolly Parton, Emmylou, and Linda Ronstadt (audio clip below). It's easy for me to speculate that "My Dear Companion," on which Emmylou takes the lead vocal, was chosen by her as a tribute to Gram, her late musical companion and friend. I never met Gram Parsons, but I knew of him before he became famous. While I was at the University of South Florida in the mid to late 1960s I became friends with several fellow students who had known him in his home town, Winter Haven. They told me about this brilliant, talented guy who was a folk singer, and who performed with his group, the Shilohs, at the Derry Down, a night club for teenagers that was owned by his stepfather. I heard that he was at Harvard, and, later, that he had dropped out and started a group called the International Submarine Band, in which he was later joined by fellow Havenite Jon Corneal. I was thrilled when, in my second year of  law school, I read that he had joined my favorite rock group, the Byrds. I bought their newest album, Sweetheart of the Rodeo, which includes what has become Gram's signature song, "Hickory Wind". I followed his career as he left the Byrds and, along with another former Byrd, Chris Hillman, formed the Flying Burrito Brothers, then had a solo album, GP, which introduced to a wide audience the voice of Emmylou Harris. His death from a drug overdose in 1973 saddened me enormously.
Posted by Claude Scales at 5:23 PM No comments: 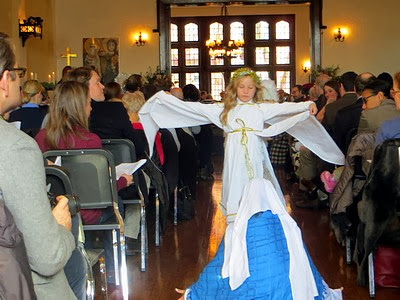 My most popular post over the course of the past year has been about Henry Ossawa Tanner's painting, "The Annunciation," which I first saw thanks to The Rev. Stephen Muncie, Rector of Grace Church, Brooklyn Heights. In my post I contrasted Tanner's depiction of the angel Gabriel as a shimmering shaft of light and Mary as a young Middle Eastern peasant woman huddled in her bedclothes with the traditional one--represented by a seventeenth century painting by Phillipe de Champaigne--of Gabriel as a human figure with wings and Mary as an apparently well to do European woman.

Yesterday's Advent pageant at Grace Church began with the Annunciation (photo above); a more traditional representation than Tanner's but a more realistic, in my estimation, one than de Champaigne's. 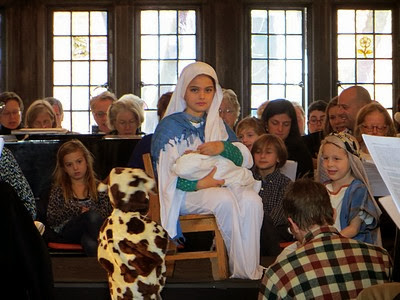 Here's a better view of Mary, holding the infant, and attended by a very appealing calf.
Posted by Claude Scales at 12:18 AM No comments: