Norovirus or no, Queen Victoria arrives. 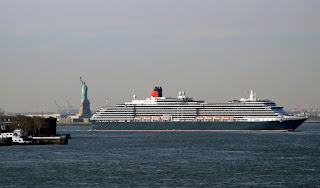 Cunard's newest cruiser, the 90,000 grt Queen Victoria, as I saw her this morning from the Brooklyn Heights Promenade, passing Governors Island and the Statue of Liberty en route to the cruise ship terminal on Manhattan's West Side.

News reports were that the ship might be denied permission to dock here because some passengers had been infected with norovirus, which causes gastrointestinal distress and nausea. Evidently, the crew and medical personnel on the ship were able to contain the outbreak before it reached a level sufficient to justify such action. Several other cruise ships have had similar problems recently.

Addendum: Was it all the fault of H.R.H. the Duchess of Cornwall? Perhaps she could use some bottle-smashing lessons.
Posted by Claude Scales at 12:55 PM 2 comments: