In the Real Baseball League (a.k.a. the Senior Circuit), the Cubs (who haven't won a Series since 1908) and the Dodgers are in. The other two will come from these three: Mets, Phillies, Brewers. Until recently, the Brew-ha-has (as Milwaukee native and Kettle of Fish owner Patrick calls them) looked like a lock for the wild card, but they've had a near end of season collapse that rivals the one that doomed my Mets last year. Meanwhile, the Mets, despite serious injury hits to their starting rotation, bullpen, and outfield, are still in the thick of things. If they can make the post-season and last beyond round one, Manuel should not only be stripped of his "interim" designation; he should be NL manager of the year.

The Designated Hitter League (a.k.a. the league for people with short attention spans) playoffs definitely include Los Angeles de Anaheim and the Tampa Bay Rays. Conventional wisdom has it that the Rays, having no playoff experience, have no hope of going the distance (just like the 1997 Marlins and the 1969 Mets). The Red Sox look to be a lock, either as Eastern Division champs if they can overtake the Rays and relegate them to the wild card, or, more likely, as the wild card. (My wife is happy.) The final spot will be taken by the Central division champs, either the White Sox (opening the possibility of a first-ever "El Series") or the Twins.

I see four possible final outcomes that would make me happy, in order of preference: (1) Mets (but, given the conventional wisdom that pitching is everything in the playoffs, they seem a long shot); (2) Rays (old hometown loyalty, as well as a liking for Cinderellas, and I think Joe Maddon is a really cool guy); (3) Cubs (for reasons explained here); and (4) Red Sox (spousal loyalty).
Posted by Claude Scales at 11:17 PM No comments:


Here's the Canadian blues singer (part of a proud tradition going back at least forty years, to Ian Tyson doing "Flies in the Bottle") Sue Foley doing "Queen Bee", her version of Slim Harpo's "King Bee", which was also covered by Pink Floyd and the Stones.

Thanks to shadowknowz for the clip.

Update: On the subject of Pink Floyd, I've just learned of the death two days ago of founding member and keyboardist Richard Wright. R.I.P. (Scroll down the linked page to find a video clip of Wright and former Pink Floyd guitarist David Gilmour doing a chilling version of "Comfortably Numb".)
Posted by Claude Scales at 3:29 PM 1 comment:

Thanks to Kei Andersen, I've discovered Pandora Radio, a site that lets you set up your own music programs to play on your computer, based on your preferences for certain artists or styles. So far, I have set up "stations" that play music by (or similar to that by) Gram Parsons, Fairport Convention, Miles Davis, Koko Taylor, and Kronos Quartet. It's easy to do, and it's free.
Posted by Claude Scales at 11:31 AM No comments:

College football: Bulls, Pirates survive; Trojans romp, not much else of note happens.

Contrary to my earlier trepidations (see "Update"), my South Florida Bulls were able to knock off the Kansas Jayhawks (since USF beat the Tennessee-Martin Skyhawks in their opener, the season record is now ungulates-2, raptors-0), as a result of which the Bulls rose to twelfth in the AP poll (one better than the rank previously held by Kansas), while the Jayhawks fell to nineteenth, the former position of USF. The Bulls are now cruisin' for a bruisin', but I'll be bold and say it probably won't come next week at the hands of Florida International, even though the game's in Miami. It'll be closer than expected, though.

This year's big surprise team, the East Carolina Pirates, despite having major upsets over Virginia Tech and West Virginia, was nearly capsized by Tulane's Green Wave, but managed to right itself. The Georgia Bulldogs, ranked second going into the game, survived a tough challenge from Steve Spurrier's unranked South Carolina Gamecocks. The Bulldogs were thereby demoted to third, behind USC and Oklahoma. The Florida Gators, idle this week, held at number four.

So, there's reason to keep watching.
Posted by Claude Scales at 9:43 PM No comments: 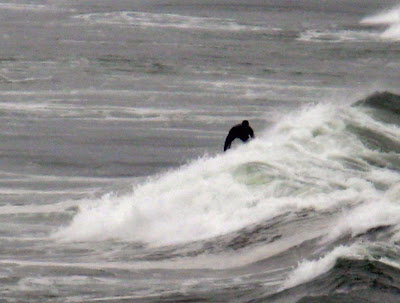 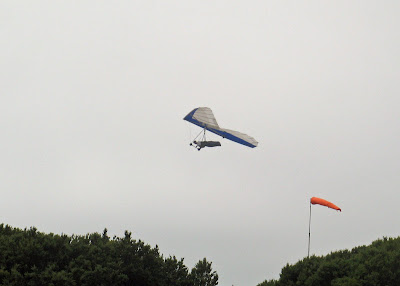 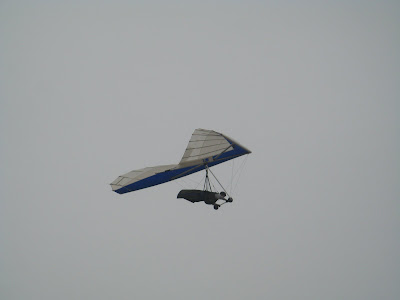 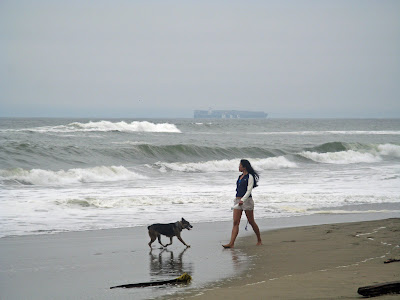 On the beach, Fort Funston. 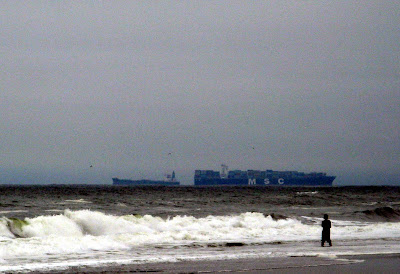 It's all San Andreas' Fault 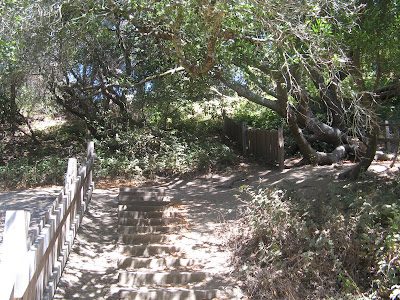 On a visit to the Point Reyes National Seashore, we began by walking the Earthquake Trail. The displacement between the sections of fence in the photo above (lower to the left, upper to the right) shows the extent to which the land was shifted by the great 1906 earthquake that devastated San Francisco. 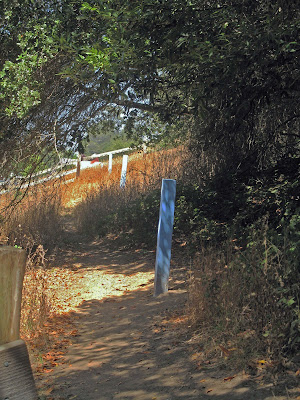 The three posts marking a line going toward the fence in the background show the approximate alignment of the San Andreas Fault. The Fault roughly marks the boundary between the North American and Pacific tectonic plates. So, I can say that, when I took this photo, I was standing on the Pacific Plate, to the west of the Fault, looking at the North American Plate, to the east (and right) of the line extending through the posts.

Fortunately for me, the earth did not move during my visit to this very excitable spot. I'm told that Northern California experienced a small earthquake a few days after we left.
Posted by Claude Scales at 9:49 PM No comments: