I know my hundreds (tens?) of faithful readers have been waiting eagerly for my next submission here. Real life has interfered, in a good way for me, in the form of a substantial increase in work. So, I'm going to have to budget my blogging time.

Meanwhile, I'll continue in the sports rut I seem to have fallen into lately, by noting that I saw a headline on MSNBC's sports page a few days ago, something like "Florida swaggers into Alabama game." Seeing anything about the Gators swaggering leads me to one inescapable conclusion: the Tide will roll this afternoon.
Posted by Claude Scales at 10:43 AM No comments: 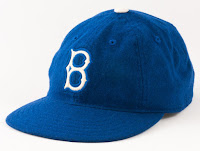 ... I sat in the "cafetorium" of the Eglin Air Force Base Elementary School, in the pine woods of the Florida Panhandle, along with the rest of the students, teachers and administrators, to watch the opening game of the World Series between the Brooklyn Dodgers and the New York Yankees. A little over a year before, I had returned from England, where my father had been stationed for three years. I also watched the 1954 Series (Giants and Indians) but don't remember anything about it except for a vague memory of the Giants' Willie Mays making a spectacular catch. I was still unlearning cricket and rounders and learning baseball and American style football.

At the outset of the '55 Series, everyone expected the Yankees to win. Since I have a propensity to identify with underdogs, and since Brooklyn was the first place where I touched U.S. concrete after returning from overseas, I decided to root for the Dodgers. My faith was rewarded. When the Dodgers left Brooklyn my loyalty shifted to the Pittsburgh Pirates (I was born near there), who thrilled me with victory over the Yanks in 1960, and, later, to the Dodgers' natural successors, the Mets.
Posted by Claude Scales at 5:43 PM No comments:

Has Testaverde gone to seed?

Gang Green is about to find out.
Posted by Claude Scales at 10:46 AM No comments:

Mixed feelings going into the LSU-Tennessee game. My Gators already beat the Vols, and LSU was still ranked ahead of Florida, so a Tennessee victory would be good for the Gators. But there was the whole hurricane thing, as well as an admiration I've had for the Bayou Bengals since the days of Billy Cannon and the Chinese Bandits. So, I'm left with nothing more to say than the Vols reminded me of the Fighting Irish on so many occasions when I was rooting for them to lose, and they overcame what seemed to be an insurmountable deficit.

Friday night I was making one of my now infrequent appearances at the Kettle of Fish. Patrick, the owner, comes from a place called Wauwautosa, just outside Milwaukee, so there were lots of people in red shirts there, watching the Michigan-Wisconsin game. During a break in the action, I glanced up at the screen as a highlight from another game was being shown. There was a guy in a green and gold uniform dashing through a defense wearing red and white, and scoring. Then I saw at the bottom of the screen, "South Florida 14, #9 Louisville 0, 1st". My amygdala lit up like a Roman candle: "My alma mater is beating a top ten team!" "Inconceivable!" replied my cerebrum, doing its best imitation of Wallace Shawn in The Princess Bride. "This won't last. Remember Scales' first rule of college football (born of years following the Florida Gators): 'The upsets you want hardly ever happen; those you don't want happen more often than not.'"

The noise of the Badger fans became unbearable, so I took the subway home. The USF-Louisville game wasn't on any locally available channel, so I had to follow it on line. I was sure by the time I boooted up that the Cardinals would have restored Beano Cook-ish sanity to the gridiron world. The screen came up and said, "South Florida 24, #9 Louisville 7, 3rd". Still plenty of time for the Card defense to stiffen, and the offense to score the two TD's and one FG needed to send it into overtime, in which the team with momentum almost always prevails.

Not wishing to watch this painful process play itself out, I went elsewhere on the web. When I finally looked back in, I saw "South Florida 38, #9 Louisville 7", with something like eight minutes left in the game. Not only that, but the Bulls had the ball, and were in Cards territory. A minute later they scored, got the PAT, and it was 45-7. "Inconceivable", I said to myself, as I clicked the refresh button through a final Louisville TD, and then victory for South Florida.

Next Saturday the Bulls play Miami. The Canes started their season with a rare loss to archrival Florida State, but have since won a tough one from Clemson, and a surprisingly easy one from Colorado. Their next two games after USF are Duke and Temple, so they're not going to be looking ahead to anything big. Having seen what the Bulls did to a ranked team (indeed, Miami has now inherited the #9 spot previously held by the Cards), they won't be complacent. So, can USF beat Miami? At the Orange Bowl?

Inconceivable.
Posted by Claude Scales at 10:44 PM No comments:

Mets get another improbable victory, but St. Louis j.v. doesn't look up to defeating Astros.

Wait 'til next year.
Posted by Claude Scales at 10:21 PM No comments:

Getting the Mets out of the wild card race is sort of like trying to kill Rasputin.

They'll stay in for another day, if (1) they beat the Phils in Philly again tonight, using Zambrano, not Martinez, against Lieber; and (2) Morris and the Cards' junior varsity, playing at home, beat Oswalt and the Astros.
Posted by Claude Scales at 3:40 PM No comments:

"We never much thought we could get very old": a boomer tale, part 1

I've just watched Scorsese's No Direction Home, and I'm all verklempt. David Greenberg's take in Slate was that the piece was a boomer scrapbook, ignoring Dylan's later career. Well, I've got to admit, I pretty much ignored everything after Blood on the Tracks, mostly because I'd found other stuff to follow, but also because I was convinced nothing he could do could possibly equal what he did in my student days. Kinda like the realization I had at about age thirteen, when I concluded that the kiss of death, from my viewpoint, at least, for a singer was the album with liner notes that said, "This represents X's development as an artist", which translated as, "S/he's given up that immature rock'n'roll stuff to do show tunes and pop standards, and hopes to be playing Vegas soon."

Not that I ever feared Dylan becoming a lounge act (well, yeah, I sort of did). I've got a lot to write about this, which is why I've captioned this "Part 1", so, since it's late, I'm running out of Cognac, and I have to work tomorrow, I'll conclude with a few odd obsevations.

When I first read about the young singer from Minnesota named Bob Dylan, I assumed his name was pronounced "DIE-lan" and that he was a muscular Norwegian-American lad in the grand old Midwestern-Scandinavian social-democratic farmers' and laborers' tradition.

I joined the Columbia Record Club during my freshman year of college, which meant I got to order six albums from their catalog for the price of one. One of the six I chose (along with Surfing by the Ventures and Hey, Little Cobra by the Rip Chords) was The Freewheelin' Bob Dylan. I hadn't heard him yet, but I knew he'd written "Blowin' in the Wind", and was curious. When my records came, I found that I'd gotten everything I'd ordered except the Dylan album. Instead of that, I'd received Theresa Brewer's Greatest Hits. A friend congratulated me on my good fortune.

I did get Freewheelin' shortly after that, and, like lots of people, mistook Suze Rotolo for Joan Baez. Soon after that, I got Bob Dylan, The Times They Are A'Changin', and Another Side of Bob Dylan. The last of these quickly became my favorite album, supplying an appropriate soundtrack for my sophomore angst.

During my sophomore year, I returned to my dorm room one night to find a sign taped to the door: "Available Free! (1) portable stereo, (2) innumerable Bob Dylan albums. Come by anytime when Scales isn't in." The roommate who posted this would, whenever he heard "Chimes of Freedom", shout "Chimes don't flash, Bob!" He later dropped out of school to join the Marines.
Posted by Claude Scales at 11:36 PM No comments:

A bad joke only a boomer could get. 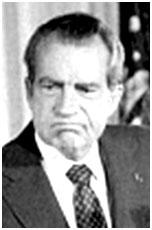 Trichinosis: a disease that makes your nose look like Richard Nixon's.
Posted by Claude Scales at 11:26 PM No comments: