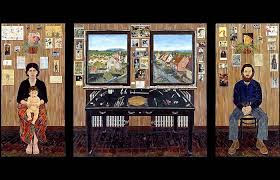 Simon Dinnerstein painted The Fulbright Triptych (above) over a period of several years during and after living in Kassel, Germany on a Fulbright fellowship, studying print making. It is leaving its permanent home at the Palmer Museum of Art at Pennsylvania State University on loan to the McMullen Art Museum at Boston College, where it will be from September 8 through December 8. The McMullen Museum website says the Triptych will be on view starting Monday, September 9, but Mr. Dinnerstein's email says it will be open on Sunday, September 8 from noon until 5:00, and that he will give a talk about the painting at 3:00.

As the Museum's press release, linked above, points out, the Triptych


was produced in an era of postwar art [the early 1970s] when minimalism, video art, and and installation dominated the New York scene. At the time, figuration, and even painting itself were out of fashion.

Mr. Dinnerstein's email gives a link to "Triptychs and Temporality." an article, from the Journal of the National Academy of Art and Design, by Larry Silver, Farquhar Professor Emeritus of the History of Art at the University of Pennsylvania. Professor Silver discusses the references to historical artistic styles and artists that appear in the Triptych, with illustrations that focus on details of the painting. 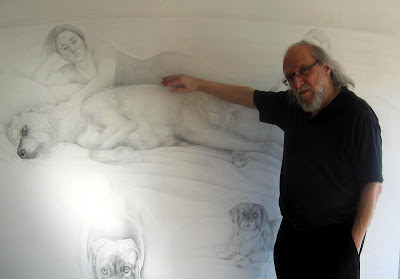 I had the pleasure of meeting Simon Dinnerstein twice. The first time was after he gave a talk about the Triptych at the Brooklyn Historical Society. The second was when, at the suggestion of my friend Louise Crawford, I visited his home and studio in Park Slope, Brooklyn, and took the photo shown above. The story of that visit, along with those of mine with six other artists over a two day span, is here.

If you're wondering what became of the baby held in her mother's lap in the left side panel of the Triptych, watch the video above.
Posted by Claude Scales at 4:03 PM No comments: