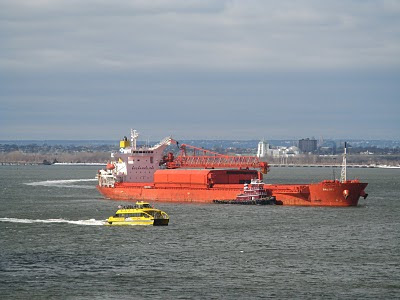 Just over two years ago, I spotted the self-unloading bulk cargo ship Balder going seaward on the East River. A few days ago I glanced through a window in my apartment and saw something large and bright orange coming through the channel between Governors Island and lower Manhattan toward the East River entrance. I grabbed my camera and went across the street to the Brooklyn Heights Promenade, where I got this shot of Balder, fully loaded and headed to a berth at the Brooklyn Navy Yard.

I get occasional visits to this blog off web searches for Balder. A few days before I took this photo, I got such a hit from somewhere in Quebec. There are several ships, including Balder, Atlantic Superior, and Alice Oldendorff, that have hauled crushed stone from Canada to the Navy Yard.
Posted by Claude Scales at 11:45 AM 1 comment:

What's more, they beat the Braves, a traditional nemesis. Nevertheless, there had to be an injury-related worm in the apple, as pitcher Elmer Dessens is removed after a line drive hits his knee.

So, what does this mean in the great scheme of things? In the immortal words of Mr. Natural, "Don't mean shee-it." Remember, they won the spring training opener last year.
Posted by Claude Scales at 10:12 PM No comments:

Many of us boomers think of the 1960s as the acme of pop music. Several genres had their origin, and sometimes their demise, in that decade: Motown, Philly and Memphis Stax/Volt soul; surf; Phil Spector's "wall of sound"; British invasion (itself consisting of several sub-genres such as Merseybeat, the Oxford sound, and various R&B influenced styles: London--think the Rolling Stones; Newcastle--think the Animals; and Belfast--think Them and Van Morrison); folk rock; San Francisco psychedelia; and even an early sort of disco exemplified by Joey Dee and the Starliters. In this post, I've collected a few of the perhaps less enduringly famous remnants of that decade which I nevertheless remember fondly. Some of these are grainy black and white videos with less than perfect sound, but I hope you can enjoy them.

The radio soundtrack for my first term at the University of South Florida in the fall of 1964 prominently included this song, along with Manfed Mann's "Doo Wah Diddy Diddy", Gene Pitney's "It Hurts to Be in Love", and "She's Not There" by the Zombies. Gale was later an occasional visitor to the Lion's Head, but I never met her.

We Five were not quite a one hit wonder; after "You Were on My Mind" a later recording, now forgotten, made it to 31 on the pop charts. "You Were on My Mind", written by Sylvia Fricker Tyson of Ian and Sylvia, reached number three on the Billboard "Hot 100" in August of 1965. Much of its success, and that of the subsequent album, can be attributed to the style and vocal range of their lead singer, Beverly Bivens. She has been compared to, among others, Fairport Convention's first female singer, Judy Dyble.
Posted by Claude Scales at 10:45 PM 3 comments: