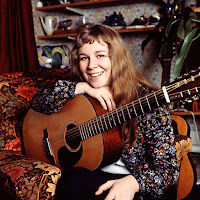 Alexandra Elene MacLean Denny, known to the world of devotees of British folk and folk rock, of which I'm part, as Sandy Denny, died on April 21, 1978 at the age of 31, following a fall down a flight of stairs. I got this news by radio while driving across the George Washington Bridge on my morning commute from my home in Greenwich Village to my job in suburban Rockland County. I got a lump in my throat, but managed to keep my eyes on the road.

I first heard Sandy Denny's voice coming from the dorm room of my law school classmate John Lovett in the spring of 1970. I was walking past his partly open door when I heard something sounding stately, like Anglican chant, with a lovely female lead and male harmony vocals. I knocked and asked John what he was playing. "Fairport Convention," he said.


The song I heard coming from John's room was "Percy's Song," an obscure Bob Dylan piece I didn't know. It was from Fairport's third album, Unhalfbricking. I didn't buy a Fairport album until after I graduated and moved to New York. The first one I got was Liege & Lief.


"Tam Lin" is a typical example (in my opinion a particularly good one) of the songs on Liege & Lief, which represent Fairport's turn, under Sandy's influence, to folk rock arrangements of traditional English and Scottish ballads, or new songs reflecting those influences.

After Liege & Lief, Sandy left Fairport and joined her future husband, Australian born singer and songwriter Trevor Lucas, in a group called Fotheringay, named for the castle in which Mary Queen of Scots spent her last days and was executed. The group had one, in my opinion excellent, eponymous album.

The album included "Peace in the End," an optimistic song about the then (1970) apparently insoluble "Troubles" in Northern Ireland. Fotheringay broke up after one year, as Sandy decided to pursue a solo career. In 1971 she released a critically acclaimed album, The North Star Grassman and the Ravens.


That same year, at the behest of Robert Plant, she sang with Led Zeppelin on "The Battle of Evermore."

After Sandy left Fairport, it continued as an all male band.  Their first album in that guise had the title Full House, which I thought a bit cheeky, although I liked the album nevertheless. In November of 1974 I went to my first Fairport concert, at Carnegie Hall. When the band took the stage I was surprised to see Sandy taking her seat at a grand piano. A man sitting not far from me called out, "Welcome back!" She answered with a chirpy "Thenk you!"


They proceeded to give a riveting performance that included some old favorites from Liege & Lief and earlier albums, but also new material, including the searing antiwar ballad "John the Gun."


In 1975 Fairport released Rising for the Moon, with a stirring title track that showcased Sandy's voice beautifully. Its opening lines -- the lyrics are by Sandy -- tell of the life of a traveling musician:


I travel over the sea,
And ride the rolling sky,
For that's the way it is,
That is my fortune,
There are many ears to please,
Many people's love to try,
And every day's begun,
Rising for the moon.

Also in 1975 Sandy and Trevor Lucas, who were married in 1973, left Fairport. They had a daughter. Their marriage lasted until Sandy's death in 1978.

Yesterday I saw this Chicago Tribune piece by Greg Kot about Sandy, and how her influence lives in the work of groups like Mumford & Sons, Fleet Foxes, and the Decembrists. Kot focuses on the first song of hers to gain wide attention.

That song was "Who Knows Where the Time Goes?" It was made popular by Judy Collins who, as Kot notes, was a shrewd judge of talent, a year or so before Sandy recorded it with Fairport. Sandy's version is in the audio clip above.

I disagree with Kot in one respect. He calls Fairport's first and eponymous album, made before Sandy joined the group, "unremarkable." Its sales may have been disappointing , but I think it's a fine bit of artistry. It was the second Fairport album I acquired, and I was struck immediately by their rendition of the driving rocker "Time Will Show the Wiser". I was also captivated by their rendition of Joni Mitchell's "I Don't Know Where I Stand," featuring the voice of their first woman vocalist, Judy Dyble (unfortunately, no clip of this is available). She has -- she is still singing and recording -- a strong but sweet voice. It was perhaps stronger -- more Grace Slick than Joni Mitchell, although I think she covered Mitchell brilliantly -- than the guys in the group wanted for their turn towards more folk influenced material.

A version of Fairport Convention still exists; they most recently released an album in 2015, and may be the longest surviving major rock band save the Rolling Stones and the Who. Sandy Denny was an essential element in their success.