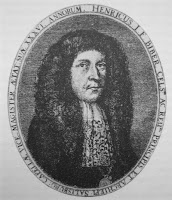 Heinrich Ignaz Franz von Biber was a true Bohemian; that is, he was born and raised in Bohemia, then a German speaking enclave in what is now the Czech Republic. Most of his musical career, however, was spent in Salzburg, Austria. Biber's music is not as well known today as is that of his near contemporaries J.S. Bach, Handel, Telemann, and Vivaldi, except perhaps among music historians and Baroque aficionados. Nevertheless, he was quite creative, using novel tunings and techniques. His music was the inspiration for this concert, although he is the only Bohemian among the five composers whose works were represented in it.

Repast's performance of Biber's works was at their usual standard of excellence. For this concert, they were joined by violist Jessica Troy, whose playing fit seamlessly in the group's style. None of the works in the concert called for a bassoon, so Stephanie Corwin was afforded an opportunity to travel. Biber's Fidicinium Sacro-Profanum #11 in C minor (the Latin title translates loosely as "Sacred and Profane Fiddle Music") got the program going on a lively note, using a rhythmic technique he called "Harpeggio". His Praeludium from Partita No. 6 (from the Harmonia Artificioso Ariosa was dance music, also very lively. The Mensa Sonora in A minor No. 3 is described in the notes I took during the concert as "swooping - gentle". The Passacaglia in G minor for solo violin gave Amelia Roosevelt a chance to do a star turn, and she handled it with her usual aplomb. My notes include the words "twittering flourishes". The Balletti Lamentabili was in six short parts of which I made the following notes: "(1) contemplative, (2) steady, (3) aspiring, (4) sprightly, (5) emotive, (6) sorrowful".

Johann Heinrich Schmelzer was an Austrian born composer almost all of whose career was spent at the courts of the successive Hapsburg emperors Ferdinand II and III, and Leopold I, the last of whom ennobled him and gave him the rank of Kappelmeister. Unfortunately, this happened just a year before Schmelzer's life was cut short by a plague epidemic. The death of his second emperor occasioned his composition of the Lamento sopra la morte Ferdinand III. My notes on this were: "mournful, lively at end - ascent?" The final movement may express Ferdinand's spirit ascending to the realm of glory. Schmelzer's Polnische Sackpfeifen ("Polish Bagpipes") was given pride of place as the final work in the concert. My notes: "Puff! Puff! Puff! chanting melodies; round with violin and viola, and cello". The cello was played superbly, as always, by Katie Reitman.

Dietrich Buxtehude, whose birthplace and nationality were disputed (Danish or German?) was a superb composer and organist. It's said that J.S. Bach walked 250 miles to hear Buxtehude play. Buxtehude's Toccata in G major for solo harpsichord, BuxWV 165, gave Gabe Shuford his opportunity to break from continuo and show his considerable talent, which he did to full effect.

Gottfried Finger was born in Moravia, now also part of the Czech Republic, but spent much of his musical career in London. His "Sonata Op. 1 No.4 in B flat major" got my notes "ethereal to upbeat."

Henry Purcell was considered the greatest of British Baroque composers. His production of orchestral, chamber, and operatic works during his too short life (1659-1695) was prodigious but also of great quality. Repast performed his Fantasia in A minor for 4 parts; the only "Fantasy" in this concert. My notes: "languid; dreamlike until final".

This was a superb concert. Repast's concert schedule will resume in the fall; I'll keep you advised as soon as details are available.
Posted by Claude Scales at 11:54 PM No comments: