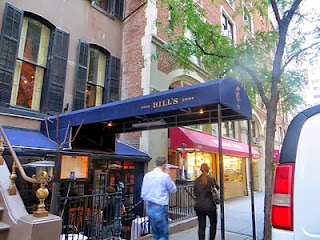 Back in 1970, during my first year as a New York City resident, my roommate and I brought dates to this place on East 54th Street.  At the time it was named Bill's Gay Nineties and, as the name implied, it was a pitchers of beer, peanut shells on the floor kind of place with a guy in a straw boater playing banjo and singing "Sidewalks of New York." Some years later I walked by and noticed that the name had been changed to "Bill's Nineties Bar," no doubt to avoid possible misidentification as a gay bar.  A few days ago, I walked along the same block again and saw that the name is now simply "Bill's." I suppose the passage of time means that "Nineties" now opens the question: do we mean the era of Diamond Jim Brady and "Remember the Maine" or the more recent decade characterized by, as a friend put it: "lots of Backstreet Boys and body glitter"?
Posted by Claude Scales at 1:31 PM No comments: 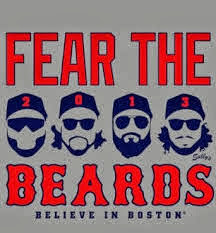 From 1960, the year the "Beat 'em Bucs" Pirates took the measure of the big, bad Yanks, until 1967, I didn't pay much attention to baseball. I was amused by the '62 Mets (and never thought that someday I'd be a fan), and had a flutter of interest in the '65 Minnesota Twins and Harmon Killebrew.

When I arrived in Cambridge for law school in September of 1967, I was quickly made aware that the local team was on a roll. When they won the pennant, things went wild. "Owah Sahx ah th' greatest!" a townie kid cutting across the Yard on his way home from school yelled as he passed me. "They'ah gonna beat those Cahd-nuls." So I started paying attention to the sports news and learned about Lonborg and Yaz and Scott and Rico and the tragic injury to Tony C.--I found out that my then girlfriend, who lived in Richmond, Virginia, had a crush on him--that would keep him out of the World Series lineup. I heard "The Impossible Dream" on the radio a hundred times.

The dream would prove impossible. It took seven games, but the Cards beat the team that had last appeared in a Series the year I was born (1946) and last won one two years after my mother was born (1918). By 1986 I had become a Mets fan--a logical extension of my first baseball love, which was for the Brooklyn Dodgers--and so celebrated the Sox loss of that Series, though with just a hint of wistfulness.

This year I'm rooting for a reversal of 1967, in part because my wife is a Sox fan, but since I've long had a soft spot for the Cards on purely aesthetic grounds, I hope it goes to seven games again.

Addendum:  Archaeopteryx reminds me that 2004, the year the "curse" on the Sox was lifted, was also a replay of '67, Sox vs. Cards, though it was won by the Sox in a four game sweep. Because of my father's illness (he died the night the Sox won game four) I didn't pay much attention to that Series. Also, Richard B points out that the '46 Series also featured the Cards against the Sox. It was, like '67, a seven game battle won by the Cards, and featured two of the past century's greatest players: Stan Musial (Cards) and Ted Williams (Sox).
Posted by Claude Scales at 1:24 AM No comments: