Arthur Boehm's posting of this Gingrich campaign ad made me remember the Austin Lounge Lizards' song from the 1990s, performed a cappella (I wonder if Newt also objects to Italian?) in the clip above. The video is a bit, uh, psychedelic, but the sound is comme il doit être.
Posted by Claude Scales at 10:10 AM No comments: 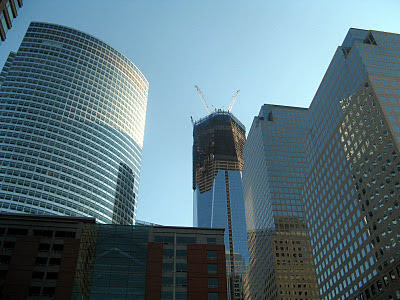 The building with the curvilinear facade at the left is 200 West Street, the headquarters of Goldman Sachs (Pei Cobb Freed & Partners, 2009). The two buildings to the right, of similar design, are Three and Four World Financial Center, the headquarters of American Express and Merrill Lynch (now a subsidiary of Bank of America), respectively (both by César Pelli & Associates; both completed 1986). In the background, the new One World Trade Center (Skidmore, Owings & Merrill LLP; completion anticipated 2013) is rising.

This photo of one of the principal nerve centers of finance capitalism was taken from the Irish Hunger Memorial.
Posted by Claude Scales at 12:16 AM No comments: