Gators win SEC. Meanwhile, Bruins stuff Trojans. So, will the Lords of BCS give the Gators a shot at the championship, or will Michigan (idle today) get a rematch? We'll see ...

(My guess? Big Ten centrism prevails, and Florida gets relegated to the dreaded rematch with N.D.)

Meanwhile, my other prediction does come true, as West Virginia scotches Rutgers' shot at a BCS bowl.

Update: Wrong again, glad again. The Gators go to Glendale. Every sensible cell in my brain tells me they'll lose; nay, not just lose, but lose embarassingly, like that last championship matchup in Arizona, the one against Nebraska. There's even the possibility of a dreaded pundits' Tevye dance: "Woody Hayes, Tra-di-shon!", and so on.

But given my recent record of fallibility, I'm not making any prediction now.

Upchuck: Joey Johnston has already started shaking the tambourine for the pundits' dance. And Sporting News's Chris Russell says of the Gators what Izvestia said (to paraphrase slightly) of the book by the protagonist of Tom Lehrer's Lobachevsky: Ya idu kuda sam tzar' peshkom hodil (They stink).

Uprarious: Russell Levine of the New York Sun analogizes Florida's selection for the BCS championship game to the role of the State of Florida in the 2000 election.
Posted by Claude Scales at 9:48 PM 1 comment:

This fall has been unusually mild, with temperatures here in New York typically topping off in the mid 60s, and getting no colder than the high 40s at night. Today, it's supposed to get up to near 70, but then, the storm that's now blasting western New York State and Pennsylvania will get here, heralded by winds predicted to gust as high as 60 miles per hour. Things will cool off a lot, with highs next week in the 40s and lows at night just above freezing. In other words, we're in for some weather I'd consider normal for early November in this part of the world. Global warming? Maybe.

If you're looking for some visuals and text that will really cool you down, I recommend this blog by David Ruth, a sculptor who works in glass, and who has been given a National Science Foundation grant to spend just over a month at Palmer Station, on the Ross Ice Shelf that extends from Antarctica. Ruth's mission is to study the qualities of ice and its relationship to glass, and he posts lots of pictures of fantastic ice forms, interspersed with photos of, and text about, Antarctic wildlife and the people and facilities at Palmer. Well worth a visit.
Posted by Claude Scales at 9:52 AM No comments: 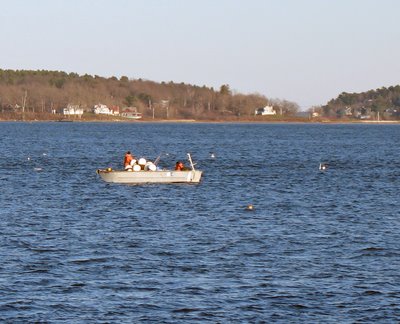 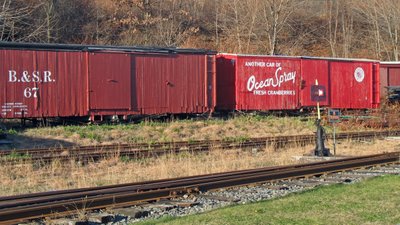 It's been many years since the freight car on the right, now part of the Maine Narrow Gauge Railroad Co. & Museum's collection, was used to haul a Thanksgiving staple. 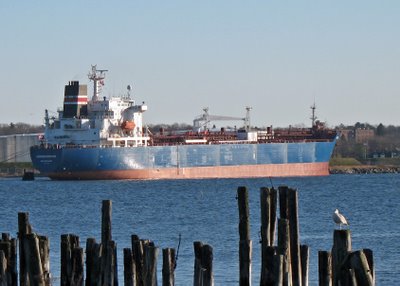 The Danish tanker Nordeuropa is discharging her cargo of crude oil at South Portland, southern terminus of a pipeline that serves the Montreal market. 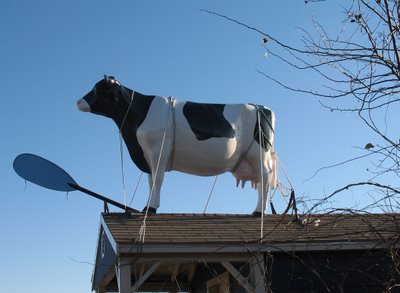 Your guess is as good as mine.
Posted by Claude Scales at 5:50 PM No comments:

Almost enough to make me root for Arkansas this weekend.

OK, I'm game for a wait. After all, I'm a Mets fan, too (must be something about teams that wear blue and orange). But then he raises the spectre of a Gator/Fighting Irish clash in the Sugar Bowl, assuming Florida manages to get by Arkansas in the SEC championship match. Yikes! A replay of the 1992 Cheerios Bowl, which I watched, first joyfully, then in agony, on the Lion's Head TV. Well, OK, shouldn't I want the Gators to get another shot at Notre Dame? Wouldn't victory this time be so sweet? Yeah, but all I can envision is Florida carrying another lead into the final minutes, then the great "Ol' Mo" switcheroo, with the boys from South Bend getting maybe a 45 yard go-ahead FG with seconds left on the clock. And then, the ultimate torture: the assembled commentators squatting on their heels, commencing to kick and, in Tevye mode, chant: "Golden Dome,Tra-di-shon! Joe Montana, Tra-di-shon! ..."

Better the Gators should lose in Atlanta and play Cincinnatti in the Roto-Rooter Bowl.

Addendum: I had a nagging feeling there was some connection between the Florida Gators and the Brooklyn Dodgers (besides being teams that often broke their fans' hearts). Now I remember -- it was Red Barber (see bio here). A native of Mississippi, Barber studied English in Gainesville and found a sideline as an announcer for the campus radio station, where he did live commentary on Gator football games. This started a career that took him to New York, where he became the voice of the Dodgers, and caused phrases like "sittin' in the tall cotton" and "tearin' up the pea patch" to become part of the Brooklyn patois.
Posted by Claude Scales at 11:37 PM 1 comment: 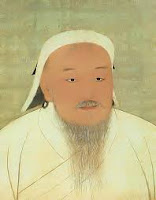 Yes, there are other contenders. For example, I think a strong case could be made for Cyrus the Great. Nevertheless, consider this passage from the introduction to Jack Weatherford's Genghis Khan and the Making of the Modern World, at page xix:


"As he smashed the feudal system of aristocratic privilege and birth, he built a new and unique system based on individual merit, loyalty, and achievement. He took the disjointed and languorous trading towns along the Silk Route and organized them into history's largest free-trade zone. He lowered taxes for everyone, and abolished them altogether for doctors, teachers, priests, and educational institutions. He established a regular census and created the first international postal system. His was not an empire that hoarded wealth and treasure; instead, he widely distributed the goods acquired in combat so that they could make their way back into commercial circulation. He created an international law and recognized the ultimate supreme law of the Eternal Blue Sky over all people. At a time when most rulers considered themselves to be above the law, Genghis Khan insisted on laws holding rulers as equally accountable as the lowest herder. He granted religious freedom within his realms, though he demanded total loyalty from conquered subjects of all religions. He insisted on the rule of law and abolished torture, but he mounted major campaigns to seek out and kill raiding bandits and terrorist assassins. He refused to hold hostages and, instead, instituted the novel practice of granting diplomatic immunity for all ambassadors and envoys, including those from hostile nations with whom he was at war."

Lowered taxes? Yes, if you define liberalism as "tax and spend", that may not seem an especially liberal move. But consider that the taxes he reduced likely were not entirely devoted to paying for the functions of government, but rather largely consigned to the enrichment of the monarch's coffers. Also note that those for whom he abolished taxes are considered to be the "liberal" professions or institutions. Most of the remainder of his program: advancement by merit not birth, free trade, freedom of religion, the rule of law (including international law), and the abolition of torture, comprise a set of classically liberal principles.

Today we think of Genghis Khan primarily as a bloodthirsty conqueror and despot. Weatherford, at pages 254-260, ascribes this to Eurocentric bias arising in the Enlightenment and later used to justify colonialism as well as vigilance against "yellow peril". But can we say, taking into account all of his accomplishments as described above, that the Khan was truly "liberal"? First, what do we mean by that much-abused term? I've already alluded to the contemporary "tax and spend" usage, implying belief in the desirability of an activist government that seeks to provide services as opposed to merely maintaining internal order and defense against external enemies. From Weatherford's description of the Khan's administration of his empire -- in particular his redistribution of wealth taken in conquest, institution of a system of fiat money, improvement of communications and monitoring of statistics -- we can conclude that he did to some extent believe in government's role in advancing "positive liberty".

I've also referred to actions the Khan took that advanced the classical liberal concept of "negative liberty", that is, non-interference with individual autonomy. In particular, these include the reduction of barriers to trade, religious tolerance, the limitation of the use of coerecive measures in the administration of justice, and the subjection of the monarch himself to the rule of law. Yet it is still fair to ask whether he was himself a "liberal" in the sense of subscribing to what the political philosopher Gerald Gaus calls the "fundamental liberal principle": that the freedom of the individual is "normatively basic, and so the onus of justification is on those who would limit freedom." Here I think we have to conclude that the answer is "no", at least to the extent that the Khan demanded total loyalty, which is certainly antithetical to a primary commitment to freedom, from his subjects. He was perhaps above all a pragmatist, having learned in his rise to power that allies were indispensable. He may have shrewdly anticipated the insights of Hobbes, Locke and Adam Smith, perceiving that the best way to create and sustain alliances is to rely on appealing to the self-interest of those whose loyalty one seeks.

Although the ascendancy of the Mongol Empire had a profoundly liberatory effect on the Eurasian world, it is ironic to note that it represented the triumph of a "primitive" nomadic society over "civilized" polities characterized by settled agriculture and urban centers. As Weatherford suggests at pages 233-34, this may be explained by the Mongol religion's having lacked a thick doctrinal structure, thereby allowing greater scope for syncretism and for pragmatic approaches to governance, trade and science.

Although Genghis Khan may not have been a "liberal" as we may strictly define that term, he was certainly "progressive". As Weatherford sums it up (at page 267): "He worked to create something new and better for his people."

Postscript: Rundeep sez: Sounds more like a capitalist to me. And I ain't talkin' e.e. cummings!

Well, dear lady, the archetypal Liberal Party (British) was, in its origins, about as pro-capitalist as you can get.

As for cummings, wasn't he an anti-capitalist?
Posted by Claude Scales at 11:14 AM 3 comments:

What does this blog have in common with a fan site for a three woman rock band from China?

Both include a photograph of the Merchant Marine Memorial (see here).

Free Time, who publishes the linked blog, was kind enough to quote mine and link to it. I had never heard of Hang On The Box before finding this link. I recommend going to some of the music videos linked to the site. HOTB has a very interesting sound.
Posted by Claude Scales at 9:16 AM 1 comment: