Aurora, the Goddess of Sparkle 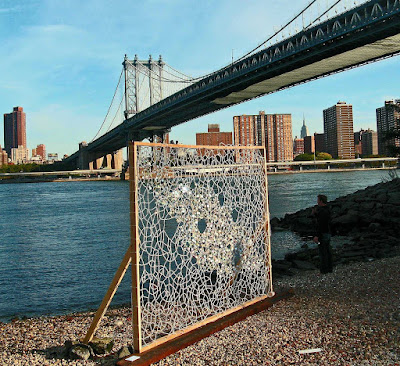 This installation by the artist NATSU was part of Project Glow, in turn part of the Art Under the Bridge festival in DUMBO. As such, she was lit at night, her many prisms producing a multicolored display. But even catching the rays of the early morning sun she was sparkly and enticing (click on the image to enlarge and get the full effect).
Posted by Claude Scales at 11:23 PM 1 comment:

Do I have a split personality?

I thought my eyes deceived me when I looked across from Pier 17 at South Street Seaport to the Brooklyn Cruise Terminal this afternoon, but Tom Turner of NYCMaritime confirms that it really was Queen Elizabeth 2.

Update: On my morning run on the Brooklyn Heights Promenade, I saw QE 2 still at her berth. I got this photo of her, along with the masts of the German naval training barque Gorch Fock, through the fog. 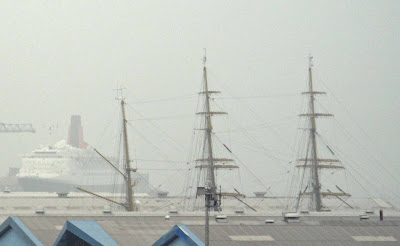 This one, Cerasinops hodgskissi, is between American and Asian dinosaurs.
Posted by Claude Scales at 11:57 PM No comments:

This blog takes a detour.

As I predicted two days ago (yeah, Maine's great pitching and the offensive explosion yesterday had me hoping I might get a chance to eat my words), the Mets are goners. So, for reasons I've alluded to before, this blog is now, for the duration of their survival in the playoffs, joining Red Sox Nation.

Sorry, Rundeep , sweetie-pie though you are. If I weren't married to a Bay Stater, I'd be backing the Phils. After all, I'm a Pennsylvania native, and they play in the Real Baseball League.

10/1 update: Topazz has the same fatalistic view about the Phils that I had about the Mets, and predicts their collapse. She also reminisces about Lenny Dykstra, which brings to my mind the rueful thought: How could the Mets have traded him for Juan Samuel?
Posted by Claude Scales at 10:40 PM 2 comments:

The just-released USA Today coaches' poll reflects the many upsets of top ten teams this weekend. Southern Cal, which survived a scare but proved that, this time at least, Trojans don't burst under pressure, stays at number one, and LSU remains ranked second. Florida once again succumbed to their nemesis, Auburn, and fell from third to seventh. Losing to Auburn wasn't fatal to the Gators' drive to the national championship last year, but this year's squad looks unlikely to repeat. An impressive win over Oregon vaults the Dirty Golden Bear to third and makes Cal look like a national title contender for the first time in many years. Formerly fourth ranked Oklahoma, trampled by the Buffs, sinks to tenth. West Virginia falls from fifth to twelfth after losing to South Florida, which vaults from eighteenth to ninth, marking the Bulls' maiden appearance in the top ten of a major poll. Ohio State and Wisconsin, both still unbeaten, rise from eighth and ninth to fourth and fifth, respectively. Boston College cracks the top ten, advancing from eleventh to sixth despite a relatively narrow win over lightweight U. Mass. Finally, Kentucky advances from fifteenth to eighth, making its first top ten showing perhaps since the days of Babe Parrilli (some Wildcat fan correct me if I'm wrong).

Update: The AP poll is out now, and LSU is rated number one, Southern Cal second. South Florida makes it to sixth, and the Gators drop to ninth. The B.C. Eagles come in seventh, and all else is the same as in the USA today poll.
Posted by Claude Scales at 1:01 PM 7 comments: