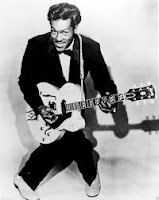 I'll be riding along in my (rental) automobile soon, so this by, in my opinion, the greatest rocker of all, was on my mind, despite my having a particular place to go. The clip below gives you the music, along with a great photo montage of vintage muscle cars.
The song charted in late 1964, just as I was starting college. Safety belts were a new thing then.
Posted by Claude Scales at 11:43 PM No comments:

Grammar snobbery is the sort of thing up with which I will not put. Well, not too much. 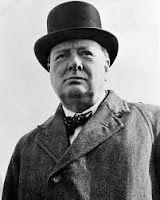 There's a story, possibly spurious, that Winston Churchill was handed a draft of something he'd written; on it, an editor had written in the margin that he should change a sentence so that it didn't end with a preposition. Churchill's response, written below the marginal note, was, "This is the sort of bloody nonsense up with which I will not put."

I've never been keen on the rule that one should never end a sentence with a preposition. It's something I'm willing to put up with. Similarly, I'm no fan of the rule against splitting infinitives. "To boldly go" is certainly the best known violation of that rule, and it sounds, and reads, so much better than "To go boldly," My guiding rule on syntax is, if its meaning is clear and it isn't ugly, it's okay.

In general, I have no objection to neologisms, unless they're ugly or replace something that doesn't need replacing. This extends to making verbs out of nouns, including, as I can never resist adding, the verb "to verb." My wife, who is an archivist, hates to see "archive" used as a verb. She's fighting a losing battle; one that, in my opinion, isn't worth fighting. Yes, "archive" is a noun meaning a repository of historically significant materials, but to use "archive" as a verb meaning to add something to an archive (n.) doesn't create any confusion. Also, "I archived X" is shorter than "I added X to the archive." The fact that "archive" is now a button on some software programs probably means the battle is over.

There's one exception to my non-objection to the verbing of nouns. That's the recently popular use of "gift" as a verb, replacing the already available and good "give." I made my argument here, then walked it back a bit, more in the sense of accepting the inevitable than changing my mind.

One thing I won't back down from is my struggle against apostrophe misuse. Using an apostrophe in a plural noun, as in "The Johnson's are coming to dinner," or failing to use one in a possessive noun, as in "That is Jims car," isn't creative or cute, it's just stupid. I've stated my case in full here.

I also get on my high horse about confusion of homonyms, such as rein and reign and throws and throes. My particular peeve now is a confusion of near-homonyms I see frequently on social media, the use of loose for lose.
Posted by Claude Scales at 6:06 PM No comments: