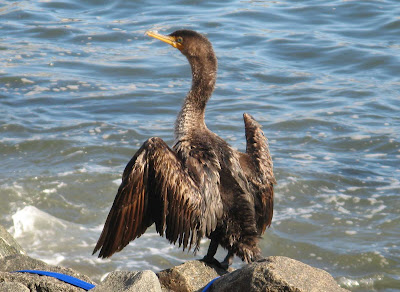 I saw this bird, perched on the shoreline riprap, on my walk through the Empire - Fulton Ferry State Park this morning.

Update: Nick asks (see "comments" below) if I used a telephoto lens. The answer is, "Yes, but just a little." I did zoom in slightly, but the bird was no more than twenty feet away when I took the photo, and showed no nervousness as I approached.

Circle Lines' plans for a solar-powered vessel to run on its Manhattan to the Statue of Liberty and Ellis Island, detailed in this earlier post, have been scrapped by the National Park Service, which licenses the concession, and which has elected to terminate Circle Line as the operator and replace it with a company called Hornblower Yachts. According to this story, Hornblower is best known for ferrying tourists across San Francisco Bay to Alcatraz.
Posted by Claude Scales at 2:27 PM No comments: 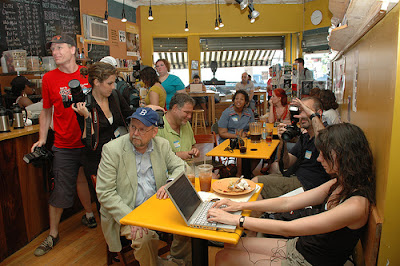 First off, credit where credit is due. I stole this picture from Xris of Flatbush Gardener who, along with Anne Pope of Sustainable Flatbush, organized this gathering. I took some pictures, but none were as good as his; besides, his have me in them. In case you're wondering, I'm the guy front and center in the above pic, wearing a blue Brooklyn Dodgers cap and looking characteristically rumpled and curmudgeonly. Just behind me, holding the camera with the big lens, is a New York Times reporter named, if I recall correctly, Liz Boylan. Behind her, in the red shirt and Mets (yes!) cap is Adrian Kinloch of Brit in Brooklyn. To my actual left (right in the photo), seated and wearing a green shirt, is Robert Guskind of Gowanus Lounge. Seated at the far end of the tables, wearing a blue dress with a striped collar, is Petra of Bed-Stuy Blog. Behind her, almost to the window, is Rob Lenihan of Luna Park Gazette. Next to Petra, in profile with Crayola-red hair, is Miss Heather of New York Shitty. (Update: Miss Heather -- see "comments" below -- denies being, or ever having been, a blogger.) On the wall side of the table is Dave Kenny of Dope on the Slope (hidden behind him is his wife, who wore a shirt emblazoned with a picture of Erszebet Bathory). The svelte, dark-tressed young woman in the foreground, addressing her Apple notebook, is Amy, who was sitting alone, enjoying an iced drink and her solitude, when a bunch of bloggers came in and a disreputable looking older guy asked if he could share her table. She graciously said "Yes." (Others who showed up later included Brooklyn blogosphere den mother, and author of the Brooklyn Paper's Smartmom column, Louise Crawford, of Only the Blog Knows Brooklyn, and her taciturn, genius photographer hubby, Hugh.)

The occasion was the Flatbush edition of the Brooklyn Blogade Road Show, an occasional gathering of bloggers from the Borough of Cherce. The venue was Vox Pop, a combination bookstore, coffee house, restaurant and tavern that seems transported en suite from Berkeley, Cambridge, Madison or New Paltz to gritty Cortelyou Road, and is run by the exemplary Sander Hicks, who treated us all to free samples of his succulent barbecue.
Posted by Claude Scales at 10:20 PM 6 comments: