Mets flounder, but the Gray Lady has interesting ideas for MLB. 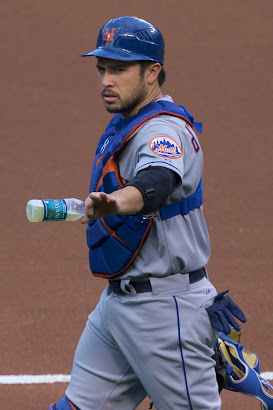 A week ago Friday I posted here, noting, with tongue firmly in cheek, that the Mets were in first place in the National League East -- a distinction I failed to note they shared at the time with the Miami Marlins -- by virtue of their 1-0 opening day victory over the Atlanta Braves. The following day the braves won 5-3 in ten innings, thanks to a lately all too common blown save by Edwin Diaz and some help from the new extra innings rule, which gave the Braves a runner on second to start the tenth. In the rubber game Atlanta provided an ice water bath as the Braves prevailed 14-1.
Starting a four game series with the Red Sox, the Mets got themselves back into winning territory with two victories. In game three the Mets did what seems to me so characteristic of them. They started the bottom of the ninth down by two, and loaded the bases with no outs, but from there were only able to bring in one more run, and the Sox won  6-5.  They lost the final game to the Sox 4-2. Yesterday, again facing the Braves, this time in Atlanta, they squandered another late inning opportunity and lost 11-10, bringing their record to date to 3-5 and fourth place in their division.
Yesterday's game gave some credence to my curse of the ex-Met theory, as the much traveled Travis d'Arnaud, shown in the photo during his Mets days, drove in five of the Braves' runs.
Update: the Mets are now 3-6, having lost to the Braves 7-2 yesterday and, as if things couldn't get worse, Yoenis Cespedes has gone missing.
My wife is a Red Sox fan, and has a theory that the worse they do early in the season, the better they are likely to finish. I don't think this applies to the Mets, although the 2008 Mets showed that a hot start was no favorable omen, and led me to write this diatribe. As a postscript to that screed, I'm now rooting for A-Rod and J-Lo to succeed in their bid to buy the Mets. Mr. Rodriguez knows a thing or two about baseball; enough to make me forgive his background as one of the shock troops for the Evil Empire.
Turning to less gloomy things, last Monday the New York Times published a piece, unfortunately without a web link, titled "How to Make Sports Better: 60 Modest Proposals." This was a joint effort by the Times' sports staff. Suggestions for the M.L.B. were, I'm sure, made by Tyler Kepner, the senior baseball writer. He began with "Speed up the game, but for real."  This would involve nixing mound visits, limiting warm-up pitches, and enforcing two minute gaps between innings. To my surprise and delight, though, he broke with what seems to be a consensus on one way to shorten game time. "Eliminate the designated hitter," he proposes. I'm with him on that. His arguments are much the same as mine, noting that many pitchers are also good hitters. He notes that "many were stellar hitters in their youth" and adds, rhetorically, "[R]eally, there's not enough time for batting practice in those four days between starts?" If "[y]our best hitter can't play the field," then "prop him up somewhere and work around it."

Kepner's other suggestions include reducing game day rosters, as is done in the N.F.L. and the N.H.L., in order to "[l]imit the incentive to substitute"; making the bases bigger because "just a few inches will decrease the distance between bases and help bring speed back into the game"; making a gap between the outfield fences and the stands to allow outfielders to make over-the-fence catches without fan interference; and having umpires "[e]nforce the strike zone that is in the rule book." Some of Kepner's ideas are whimsical, like tying concession prices to a team's record. I like this one: "Last place? Your beer is a buck."
Travis d'Arnaud photo: Keith Allison on Flickr (Original version)  UCinternational (Crop) / CC BY-SA (https://creativecommons.org/licenses/by-sa/2.0)
Posted by Claude Scales at 7:00 PM No comments: