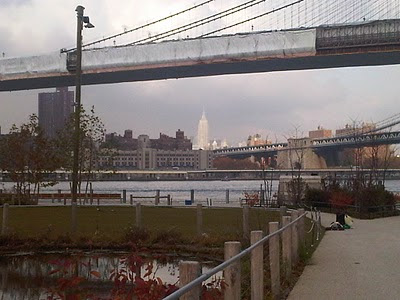 Seen from Brooklyn Bridge Park, the Empire State Building and others in midtown Manhattan are illuminated by brilliant sunlight. (Click on image to enlarge.)
Posted by Claude Scales at 11:59 PM No comments:

Brilliance of the Seas: another cruise ship calamity.

Visit msnbc.com for breaking news, world news, and news about the economy

I've never sailed on a large cruise ship, and never will. I did cross the Atlantic four times by ship in my childhood, three times in pleasant summer weather, but the first, when I was but five, in a terrible winter storm that sank the freighter Flying Enterprise. I was violently ill and couldn't hold down food for several days as huge waves tossed the S.S. Washington around like a rubber duck in a bathtub with an energetic child. Despite this, I debarked at Southampton, England with a love for ships and the sea that I've never lost.

Today's cruise ships, though, are to me an abomination. I'll make some exceptions: older ships like Saga Ruby that are survivors of the days of liner service, and Queen Mary 2 because of her shipshape lines, including a rounded stern. Most, though, like Brilliance of the Sea, don't look like ships at all, but like landbound hotels set afloat. Computer controlled stabilizers enable naval architects to design ships with much higher centers of gravity than they once could. These stabilizers make passengers comfortable during most conditions, but they are no match for what the sea can do at its worst, as the passengers aboard Brilliance learned the hard way.

The sea's anger isn't the only source of cruise ship disaster, as the recent travails of Carnival Splendor show. Mechanical problems can wreak havoc. These huge ships, carrying thousands of passengers and crew in a confined space, are also giant petri dishes, where pathogens can run amok, as witness the norovirus outbreaks that have hit Queen Victoria and other cruise ships.

I do hope to go to sea again some day. I would do it on a passenger carrying freighter, or perhaps one of the smaller cruisers that go to interesting places like the Galapagos or around the edge of Antartctica. But I would never go to sea expecting it to be an unrelieved pleasure jaunt. To me, it brings to mind this Neko Case song:

Thanks to Vancouver's Qtv.
Posted by Claude Scales at 12:04 AM No comments: