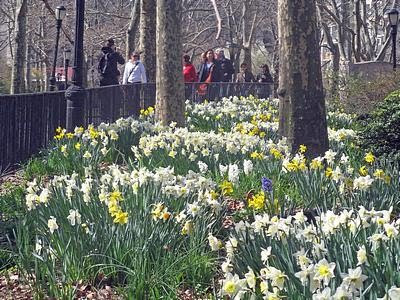 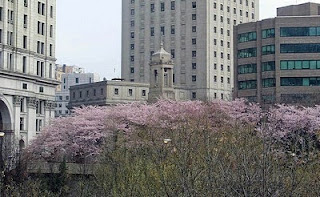 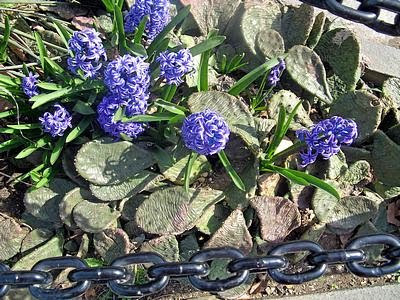 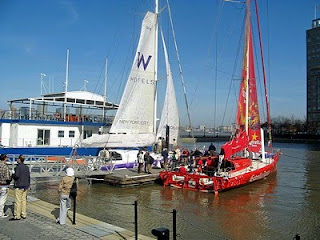 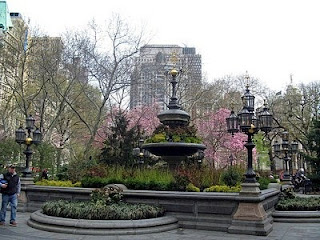 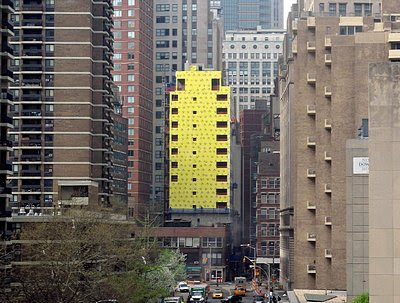 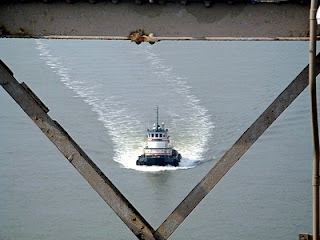 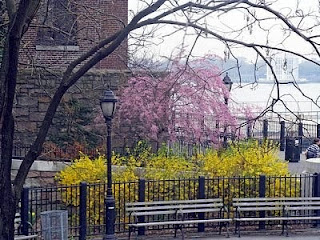 North entrance to Brooklyn Heights Promenade. Yet more cherry blossoms, and some forsythia.
Posted by Claude Scales at 4:46 PM 1 comment:

Oh, wait, the Braves and Phils both won, too. Why must life be so complicated?

Last night we were visiting friends. After dinner, we watched the first four and a half innings of the Yanks-Red Sox game. I had already pretty much written off this season in advance, and as the Yank batters kept pounding Beckett, my gloom seemed confirmed. My Bay State born wife argued that the Sox never do anything until the seventh inning, but in the top of the fifth our host, a fellow Yankee-hater, declared the game over, and we switched to the NCAA women's basketball semifinal between Connecticut and Baylor, a game made exciting only because our host had the Huskies* giving 24 points, and his son had the other side of the bet. We left before the half, and this morning, listening to WQXR on the clock radio, I learned that the son won the bet, as UConn's margin of victory was a mere twenty. More surprising, to me, was that the Sox had rallied to a 9-7 win over the Bronx Bullies, though my wife said, "Of course. I only worry when they get ahead early."

Today, as a vouchsafe for my sanity, I resolved not to watch the Mets game. Around mid afternoon, as I was coming in from an errand, I heard game noise on the doorman's radio. "Any score?" I asked, with some trepidation. "Two to one", he said. "Two to one who?" "Mets", he replied. "What inning?" "Top of the sixth." Great, I thought, that lead will evaporate soon enough. Had I the courage to turn on my TV when I got back to my apartment, I would have seen the Mets score four in the bottom of the sixth, then add another in the seventh and cruise to a 7-1 victory over the Marlins.

Alas, one game does not a season make. (Note to Twif: you've already accused me of sounding like a Cubs fan. BTW, the Cubs were on the losing end of their opener with the Braves. Atlanta scored two touchdowns, with one missed PAT, and a field goal, while Chicago could manage only a FG and a safety.)

4.6 update: UConn continues its stranglehold on the women's NCAA championship, but Stanford gives them a run for it, just as Butler did Duke in the mens' tourney. Meanwhile, the Yanks even their series with Boston. My wife could have called this one, as the Sox scored first, and led by 3-1 going into the fifth. The final was 6-4 Yanks.

Yanks win again, and Mets lose in ten. Sanity, alas, is returning to the baseball universe. Time to concentrate on other things.
__________
*Ohio is the Buckeye State, and Ohio State's teams are the Buckeyes. Connecticut is the Nutmeg State. Why aren't Uconn's teams called the Nutmegs? I mean, what do huskies have to do with Connecticut, anyway?
Posted by Claude Scales at 11:21 PM 1 comment: